The Scoop: Colin Cowie is a world-renowned event planner and lifestyle expert who has traveled more than 14.5 million miles across five continents to help his clients. He’s worked with top celebrities around the globe to create memorable weddings, decadent parties, and stunning events that bridge the divide between hospitality and entertainment. Currently, Colin is working on his 11th book and is also a noted speaker who frequently shares wedding and event tips on television and at conferences. He’s a leader in the hospitality industry and strives to help his clients realize their amazing visions and impress their guests.

Colin Cowie is famous for planning stunning events and weddings for clients, including celebrities, around the world, and he often earns high praise for his work. One couple, Jessie and Robert, shared their thoughts just hours after they returned from their honeymoon following the wedding that Colin and his team designed and executed.

“As a designer myself, I do not use the term ‘perfection’ very often at all, but this is what that was,” Jessie wrote in an online testimonial. “I can say with definitiveness that you are the very best in the business.”

For decades, Colin has been a sought-after expert in the event-planning industry. He has put together countless destination weddings, gala banquets, birthday bashes, and special dinners that leave guests in awe. A celebrity unto himself, Colin has been the man behind spectacular events for stars like Tom Cruise and Oprah Winfrey.

Colin Cowie is used to getting stellar reviews for his event planning services, but still strives for perfection.

He’s even received a rave review for an event from popular TV personality Ryan Seacrest:

Even with all the accolades and successful ventures, including 10 books, numerous television appearances, and conference keynote addresses, Colin still appreciates every bit of feedback.

“That is what we work for; the testimonials of how you make someone feel,” he told us. “We don’t take what we do lightly, and people entrust us with their wedding, party, or birthday. It’s a tremendous amount of responsibility to do it right, and we get it right every time.”

Colin’s work started when he left his native South Africa and arrived in California, where he felt more comfortable and enjoyed the pleasant weather.

“I started a small catering company, and in a short time, I was working for the Hollywood elite. I had a European sense of style, and I met Hugh Hefner and ended up planning the world’s most famous bachelor’s wedding,” he said. “That earned me the label of ‘Mr. Wedding,’ and I had been living in the country for only three years.”

Soon after planning Hugh’s wedding, he was discovered by what is now the WE Network and gained even more fame on his own television show, “Everyday Elegance with Colin Cowie.” He also became editor of InStyle Magazine during the early days of the fashion magazine.

“I had all the celebrity clients and friends, and it was a brand-new magazine. So, I helped them with celebrities from the very first issue,” he said. 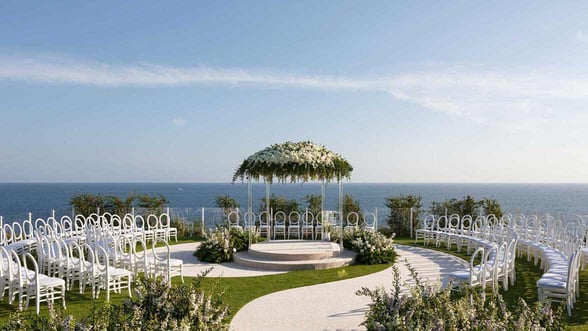 Soon, he was designing linens, china, crystalware, and tabletops for Lenox and the Home Shopping Network. He also started writing books to share his insights and inside knowledge about style, etiquette, and event planning. Colin is currently working on his 11th book.

His catering company, F.O.O.D., Inc., works with top two- and three-star Michelin chefs, including Laurent Tourondel, Gabriel Kruether, Ming Tsai, and Alfred Portale. One of his latest forays is into what he calls “hospitainment,” which is a cross between traditional hospitality and programmed entertainment, not in terms of bands, DJs, and music, but appealing to all five senses.

“It’s both how I make you feel and entertainment, not in terms of bands and DJs and music, but in embracing the senses of what you smell, touch, taste, see and hear,” Colin said. “That’s how we can create an authentic experience in the hospitality space.”

He was also recently featured in a New York Times article on culturally significant destination weddings, of which he and his team plan around 10 or so each year. One recent ceremony took place at a wild game preserve in South Africa, led by a local healer.

Colin Prefers Timeless Class To The Trend Of The Minute

Colin’s next book is titled “Colin Cowie’s Standard Operating Procedure,” and it will deal with how hospitality providers and event planners can differentiate themselves moving forward.

“It’s a book about customer service which is a currency to set ourselves apart in a crowded space,” he said. “And how do we do that? I think a focus on luxury services is the way. And if you don’t create an emotional connection, you’re just a product.”

Colin said he doesn’t rely on trends to appeal to an elite clientele. He’s not a fan of floral walls. Instead, he strives to ensure every event is as unique as the client. He looks at the DNA of the person, brand, or business before creating a vision and builds from there.

“I don’t like trends at all. When you do something trendy, it’s gone before you know it,” he said. “The way I work, no two projects are ever the same. We get to be your storyteller and make your dreams come true. That’s my approach to design and why I don’t do trends.” 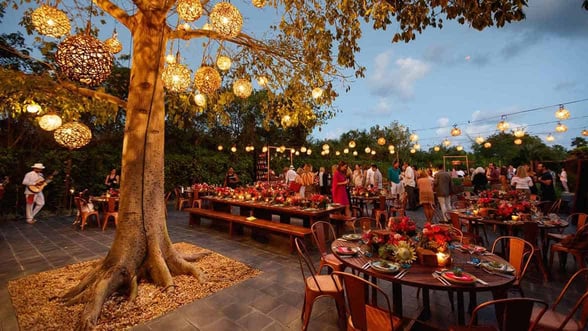 Colin began his career in the events industry after he moved to California from South Africa.

Of course, some trends stick and must be incorporated. For catering, the demand now goes beyond merely offering organic food. Now, clients expect that the food is also locally sourced to reduce the event’s carbon footprint. Another popular request over the last few years are vegan options.

“The plant-based diet has become so, so popular. Before, you used to get the Portobello mushroom and steamed vegetables, but today the cuisine is extraordinary from what we’ve seen from all these top-rated chefs,” he said. “They’re doing amazing vegan menus in restaurants.”

For arrangements, Colin prefers understated and out-of-the-ordinary flowers. For colors, he likes corals and deep greens for warm-weather affairs and navy and gold for cooler temperatures. According to Colin, the best idea is one where everyone is forced to put their phones away so they can truly enjoy the experience in the present moment.

His Biggest Upcoming Project? A Life Of Love

While Colin continues to work on extraordinary weddings and parties all over the world, he doesn’t hesitate when asked what he’s excited about for the future.

“The next big project is me getting married,” he said. “I never thought I’d get married, but I’ve never been happier in my life. I thought I had ticked all the boxes, and once you thought you had it all, you never know what’s coming. Getting to plan my own wedding will be the best production of them all.”

Colin’s big date is set for February 2020 on top of a mountain, and Page Six featured his flawless proposal to his now-fiancé, Danny Peuscovich. Colin orchestrated a helicopter ride over God’s Window, a famed canyon in South Africa, where a big sign was placed that said, “Danny, will you marry me?” Thoughtfully, Colin packed a vintage bottle of champagne to celebrate.

Of course, he’ll be fitting all of his wedding planning into a packed schedule of public speaking and conferences because he said he believes in sharing his knowledge. Colin is also working on a new television project.

“I’m so busy going from one party and one event to the next that I’ve never really stopped to think, but I know I’ve made a big impact. I was at the forefront of this industry and broke a lot of barriers in terms of big parties and big events. Everything from opening the Palm Island in Dubai, or Atlantis, and weddings that cost $25 million,” he said.

Plus, he added, love is always in demand.

“I’m recently engaged, and I’m in the business of love. And the best thing about love is that it never goes out of style,” he told us.