The Scoop: When you meet someone online, all you know about them is what they tell you, and that could easily be a lie. Catfishing has become an unpleasantly common trend on dating apps and sites, but some individuals and companies are fighting back by offering singles the resources to sort out who’s lying and who’s telling the truth. Aste is an investigative company on a mission to uncover relevant information about your online crushes. Using just a name, location, and a phone number, Aste’s researching team can put together an extensive report on the person’s social media footprint, criminal record, and work history. Aste arms online daters with knowledge so they can recognize red flags and avoid unsavory individuals.

As an online dater, I’m pretty used to keeping my guard up when meeting someone new. I’m not willing to risk my safety for a guy I don’t know, and I’m not afraid to block someone on the off chance they could be maybe dangerous. A guy asks me where I live within the first two minutes of conversation. Block. You’ll never know, buddy. A guy makes a joke about being a serial killer. Boy, bye. I don’t need that in my life.

One time, I went on a perfectly acceptable date with someone, and then he asked if he could join me in walking my dog on our second date. Let’s not and say we did? I mentioned how unbearably hot it is outside, and he answered, “Well, I can meet you after the sun goes down.”

Oh sure, I’m just going to walk in the dark alone with someone I just met. That sounds fine.

Aste is an investigative company that specializes in uncovering information about online dates.

Sometimes you have to trust that uneasy feeling in your gut and back slowly away from that giant red flag in your inbox. But what if your gut isn’t sure? What if you have conflicted feelings about someone? At that point, it’s time to do your homework and collect as much information as you can so you don’t invest your time in someone who isn’t worth it.

You can trust the dating professionals at Aste to help you uncover the dirt on a potential love interest and point out any relevant dealbreakers or warning signs.

The Aste team is like a private eye for the online dating scene. Led by Julie Nashawaty, this research team conducts exhaustive background checks on online date prospects using just a phone number, a profile name or a first name, and a location. You can use Aste to verify your date’s identity, see if he/she has a criminal history, and find out other personal details that may change your mind about him/her.

Julie was inspired to launch this investigative company after her own online dating disasters made her realize that safety wasn’t as big a priority as it should be on dating sites and apps. She embarked on a mission to hold mysterious online profiles accountable and create a safety net for singles wondering just who is on the other side of that screen.

Julie knows better than anyone the importance of vetting online dates. Why? Because she nearly dated a bank robber! If she hadn’t had the foresight to look him up and find his criminal history, she would’ve gone on a date with a felon who’d steal more than just her heart.

“Aste was born because there’s a more reliable and sophisticated way to protect ourselves,” Julie said. “Join me in a revolution of people helping people make this world a little less yucky.”

When a client reaches out to Julie, he or she typically doesn’t have more than a name and a phone number, but that’s enough for Julie to work her magic and turn up some dirt if it exists. “There are a lot of ways of going down the rabbit hole,” she told us, “and getting the information you need.”

Aste is making the online dating world a little safer one research project at a time.

Julie will do more than just Google the name — she conducts a thorough search (for at least an hour) through social media platforms, criminal databases, and other resources to discover anything and everything she can about someone. It could be as innocuous as a photo of them wearing a “Make America Great Again” hat, or it could be as concerning as domestic abuse complaints. She sometimes discovers the person was using a false name or a burner phone.

In her years as an online dating research expert, Julie has caught cheaters red-handed, and she has fact-checked people’s credentials to uncover lies and confirm truths.

“Dating sites aren’t doing enough to vet and verify users,” she said. “This was the only solution I could think of to change the online dating culture that puts people in jeopardy.”

Julie Nashawaty Advises Singles to Do Their Due Diligence

Since she founded Aste, Julie has talked to hundreds of online daters and heard their concerns about the uncertainty inherent in online dating. Most dating sites place the burden on the user to look out for themselves and report inappropriate or unsavory profiles. That negligence can put online dates in jeopardy when they have no way of knowing people’s intentions and character.

At least, they didn’t before Julie got involved. She arms her clients with information and allows them to feel confident that they’re not being catfished, scammed, or bamboozled. 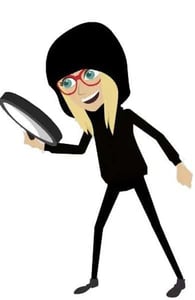 A little bit of research can go a long way in the online dating scene.

We asked if she had any tips for online daters who want to go the extra mile to protect their privacy and keep themselves safe, and she gave us a few tips that she believes should be standard practices online.

First, she recommended online daters give out a burner number that can’t be traced back to them. You can look online to find companies that will reroute your texts and calls. The Burner App, for instance, allows you to create, use, and burn multiple fake numbers when chatting with potential love interests.

Julie told us that people can often find out a lot of information about you through a phone number, so you can nip that in the bud by using a burner number.

If the texting has been going well and your date passes a background check, its time to set up a date in person and see if the chemistry is there. Julie emphasized the importance of meeting in a public place — preferably with good security and lots of witnesses — and getting there on your own. Under no circumstances should you accept a ride from someone you have not met in person. That should be common sense.

Another safety measure you can take is letting someone you trust know when, where, and who you’re meeting so they can watch your back. I’ve even texted photos of license plate numbers to my friends, just in case.

Last of all, Julie advised singles not to drink too much on a first date because that can impair their judgment and put them in a compromising position. Ultimately, it’s up to you to be aware of the potential dangers of online dating and take proactive steps to keep yourself safe.

“Everyone needs to protect themselves,” Julie said. “Your safety should be your first priority.”

Many online daters have used Aste’s sleuthy social investigators to vet their dates or their partners. The team delivers a full report that can include the person’s full name, confirmed age, confirmed location, sex offender status, major arrests, social media profiles, work history, interests, and other salient information. It’s basically everything you need to make a sound judgment regarding that person. 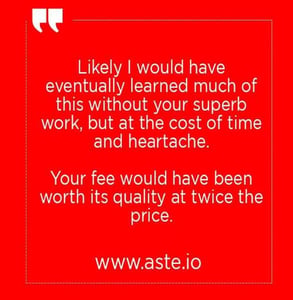 A client who learned his date had been married four times wrote that Aste had saved him a lot of heartache.

The business has grown primarily from word-of-mouth as more online daters realize they need to verify their date’s authenticity before making a serious commitment.

One time, a woman came to Julie with the name of someone she thought was boyfriend material, but the team found a Reddit post that described him as someone who brought women to his place on the third date and tried to ply them with wine so he could have sex.

Aste busts catfishers, scammers, and other potentially harmful individuals in the online dating world. Julie has heard many concerning stories over her years in the business, including that of a man whose car was stolen by his Tinder date. The car thief had given him a fake name and a fake phone number.

A majority of Julie’s clients live in the US, but she said she has also worked with individuals who are from China or the UK and want to date someone in the US. As an American company, Aste can only do so much to reach out to and protect online daters, but other companies around the world are cropping up with similar missions and messages.

“It’s not an easy thing we’re doing over here,” Julie said, “but we’re definitely helping our clients, so that makes it all worth it.”

You never quite know if the people you’re talking to on the web are who they say they are, so I tend to err on the side of caution. I listen to my gut and take common-sense measures to keep myself from getting into bad situations with a stranger. I have zero regrets about bailing on the would-be dog-walker date because anyone who makes you feel unsafe isn’t a good person to be with anyway.

Today’s online world can seem intimidating at first glance. I know I sweated bullets on my first date with a stranger from the internet. However, certain companies offer supportive resources to make the experience of meeting people online a little less scary and uncertain. Aste empowers its clients with knowledge so they can confidently explore romantic relationships with authentic individuals.

“For a low fee, I can make sure a person is who they say they are,” Julie said. “A lot of people these days know to Google their dates, but I go so much deeper than that to really find out if they’re the real deal.”

We Should Try It™ Questionnaire Strengthens Intimacy