Transdr: A Brand-New Dating App That Breaks the Mold by Giving Trans Singles a Safe Alternative to Tinder

The Scoop: The trans community remains largely overlooked on many general dating apps and sites. Some platforms don’t have appropriate gender options for them, while others don’t protect them from harassment by other users. Many trans singles face an identity crisis and risk persecution when they join an online dating network. Transdr won’t stand for that. This groundbreaking dating app launched in spring 2018 with the message that enough is enough. While Transdr isn’t the first niche dating platform to serve a trans-only audience, it has made a splash in the press by challenging Tinder, a giant in the mobile dating industry, with its free messaging, swiping, and matching system. To date, Transdr has seen over 6,200 registrations.

When Tahlia René saw that Tinder had deleted her profile, she knew something was wrong. Tahlia, currently a student at the University of Austin in Texas, sent the dating app a message asking why she’d been removed, and she was told she had violated the terms of service or community guidelines in some way. But, to the best of her knowledge, she hadn’t broken any rules. She hadn’t posted anything inappropriate. She had simply used the dating app as a trans woman.

“We all know this is because of men mass reporting me for being trans,” she tweeted. “The best part is that next to none of the men who harass me that I report get banned like this. Yet I do for being trans.”

Transdr is an up-and-coming dating app designed with trans singles in mind.

Tahlia isn’t the only trans person whose account has been deleted by Tinder. Ariel Hawkins filed a lawsuit against Tinder claiming the company is discriminating against non-cisgender users in Oregon and demanding that the app provide equal access to everyone.

Generally speaking, the online dating landscape isn’t exactly trans-friendly. Some trans singles experience harassment from users; others have their profiles banned after outing themselves. And most heteronormative dating apps just aren’t conducive to romance.

On a mission to right these wrongs, Transdr offers trans daters a welcome alternative to general dating apps like Tinder. Transdr is a safe, accessible, and nonjudgmental dating platform for members of the trans community. Launched in 2018, this niche dating app has sparked a debate about how mobile dating could better serve trans individuals.

Transdr is currently available on iTunes and coming soon on Google Play.

Transdr Co-Founder Sean Kennedy said he believes that transgender individuals deserve a safe place to meet one another and find love. “They need a comfortable place to meet and date with other trans people without judgment,” he said. “So we created Transdr, a Tinder alternative for the trans community.”

Gaining Momentum: The Network Has 6,200+ Sign-Ups So Far

Since Transdr’s official launch in March 2018, the dating app has added over 6,200 people to its diverse dating network. Men and women from various backgrounds have decided to take a chance on a niche dating platform designed to serve their interests and meet their needs.

Transdr markets itself to relationship-oriented adults in the trans community. “Are you looking for a community where you can find like-minded people for dating and friendships?” the app’s description asks. “Join us to meet and date other TS singles in a comfortable environment.”

Making trans singles feel comfortable is a high priority for the team, who realizes that many of these singles face harassment and discrimination in their daily lives. They deserve a place where they don’t have to worry about being judged or rejected because of who they are. Transdr aims to be that place. 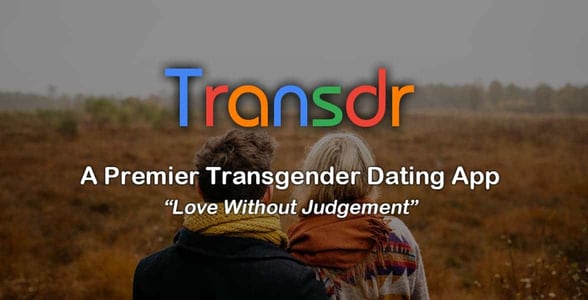 The rainbow colors of Transdr’s logo represent the diversity of its target audience.

Transdr’s release wasn’t without its fair share of controversy though. Members of the trans community have criticized the dating app for using loaded terms, including shemale, ladyboy, and sissy boy, on many of its product pages. The team has since dialed back some of its insensitive and transphobic language, stating that those words were there for SEO purposes only.

“We have improved those terms after receiving complaints from our users,” a Transdr spokesperson told the press. “We didn’t mean to offend people who care about this.”

On its surface, Transdr looks like your typical dating app. It includes the same swipe right or swipe left interface that you’d see on Tinder, Grindr, Hinge, and countless other dating apps. But what makes it stand out is the trans-friendly profile creation and search tools. Users aren’t forced to place themselves in a binary gender box here.

Transdr allows members to search for dates by location, gender, and age.

Both trans and cisgender singles (as well as everyone in between) are welcome to sign up to this inclusive dating community. Transdr may have been designed for trans singles, but it makes sure to include “and their admirers” in its marketing language.

To keep members safe from online harassment, Transdr doesn’t require users to post their real names. Users can browse the app under a pseudonym or nickname. The app isn’t connected to a social media account. Users enjoy total privacy and security as they seek romance in the trans community. The admin team personally checks every new profile to make sure it’s authentic.

Transdr is a completely free app, meaning singles don’t have to pay a subscription fee to send a message or use the app’s features. Free members can send voice chats, messages, and private photos to one another via the messaging system. Only members who have both Liked each other can send messages to one another. And members can always block or report a profile that seems suspicious or harmful.

It’s easy for trans individuals to use Transdr to search for a date and make connections in the local trans community. All it takes is a simple search, a  mutual match, and a flirtatious message. And it’s on. Transdr offers a safe place where trans singles can gain confidence in themselves and meet people who value them for who they are.

Boasting 4.7 Out of 5 Stars in Apple’s App Store

Transdr has received 80 ratings in the App Store, and the majority of them have been positive. The app currently has 4.7/5 stars in its customer reviews section.

Transdr is setting the standard for what a trans-friendly app should be.

Many users say the app’s profile verification system gave them added peace of mind when they joined the network. “The customer services will manually approve each profile and photo,” said Martin P. Robert in his review. “I trusted it.”

“I love this Transdr dating app so much,” said Wilson Peter in a five-star review. “I have no worry about scams because they check [each] profile carefully.”

The Transdr team keeps a close eye on its reviews and works hard to fix the app’s bugs or make improvements based on the comments it receives from its loyal user base.

The dating app is still new on the scene, and its team seems eager to learn from the trans community and develop Transdr’s tools to meet their needs and help them reach their relationship goals.

In late 2016, Tinder expanded to include 40 gender identity options, including transgender, trans man, trans woman, and genderqueer. However, giving people the option to identify themselves hasn’t shielded them from persecution and harassment on the dating app.

A Salon article criticized Tinder for outwardly supporting inclusion yet fostering transphobic systems and policies. “Tinder should be applauded for listening to the concerns of the trans community and working to bring dating into the 21st century,” the article reads. “Unfortunately, it seems like the company still has some work left to do in order to ensure its update doesn’t unintentionally make the problem worse.”

In the meantime, Transdr offers its services as the trans-friendly alternative to Tinder. Since it launched just a few months ago, the niche dating app has gotten a lot of good press for its efforts to build an online community where trans people can just be. Thousands of singles have downloaded the free dating app to see if it lives up to its promise to “love without judgment.”

According to the app’s Co-Founder Sean Kennedy, “Transdr is a new place for trans people who are looking for serious relationships. We also fight against sex trafficking, and we encourage our users to report any suspicious activities.”