The Scoop: Since its launch in 2013, the DOWN dating app has blown up and helped over 10 million singles do a little dance, make a little love, and basically get down tonight. The app’s straightforward approach to dating has led to its current success and popularity among sexually active daters, and the team intends to build on that success in the coming years. Anyone seeking no-strings-attached hookups can rely on DOWN to be their wingman in a private, fun, and nonjudgmental dating environment.

It’s exciting to be in the online dating industry right now because the market is growing and changing at a rapid pace. No company has a universal, foolproof rulebook for thriving in this scene, so modern dating services have had to get creative to stand out and attract singles.

That innovative spirit has led to improvements in the way people meet one another, and it has allowed small startups to compete with major corporations.

Over 10 million people have used DOWN to spice up their love lives.

This isn’t a time to play it safe. This is a time to innovate. While some dating companies stick to the status quo and endorse love-centric dating, DOWN aims to shake things up by supporting hookup culture and representing the millions of singles who, for whatever reason, just want to get laid.

The DOWN dating app offers a secure and anonymous place where sexually active adults can turn online flirtations into offline hookups.

In 2013, DOWN was initially launched as Bang With Friends to give sexually active singles an efficient way to pursue the relationships they truly desire. Its discreet matching tools and sex-positive atmosphere has won over daters of all ages, and now the team hopes to further satisfy its membership base by growing in the right direction.

In 2018, the DOWN team decided to branch off from its parent company and become, once again, an independent dating service free to follow its own moral code. That’s something the app and its users have in common. DOWN attracts free spirits who resist being tied down by any one person. These singles take pride in their independence and their ability to do what they want when they want.

Back to Basics With Simple, User-Friendly Features

DOWN supports a sexually active community of over 10 million users worldwide, and it’s still growing. The DOWN Dating Team told us organic growth will be a top priority in 2019. By building on past success and staying true to the app’s founding mission, DOWN has the potential to become the biggest name in adult dating.

Much like its users, DOWN operates under a straight-up, tell-it-like-it-is approach to life and love. The app’s developers have decluttered the interface and boiled it down to the essentials, so there’s no time wasted on virtual gifts and other excessive features. Singles log in, request dates, find matches, and get chatting. It’s as simple as that.

According to Mashable, the’s app’s primary objective is simple, and “its approach has a decidedly frat-boyesque quality that may appeal to a young user base.”

But is that enough? DOWN hopes that quality and simplicity will shine through and satisfy users hoping to avoid complications in their personal lives. 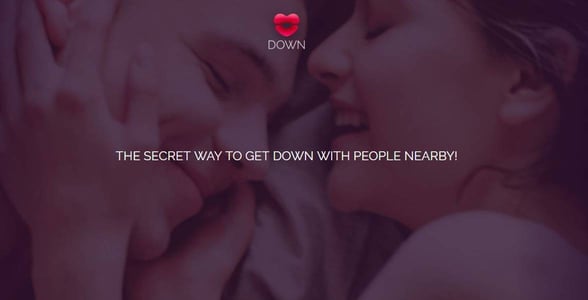 The app’s fast-paced matching system encourages singles to either get a date or get down with someone.

In the wake of many headline-grabbing online privacy scandals, DOWN has made an effort to assure all users that their profile information and matches will stay safely anonymous. DOWN’s privacy policy breaks its data-gathering practices down into layman’s terms, so new users know exactly where their personal information is going.

“You can trust us with your data,” the team said. “DOWN is committed to keeping that trust and believes the commitment starts with being very transparent and upfront about how we collect, use, and disclose your personal data.”

Since it broke from its parent company, DOWN has also removed all external advertisements and reoriented the app to be all about users meeting one another and hooking up. Now its profits will come from premium subscriptions, not ad revenue. That puts a great deal of pressure on the team to ensure the app is worth the customer’s investment.

DOWN may not have any flashy improvements on the docket, but it still intends to wow singles with a polished and streamlined dating experience.

“We have some fun stuff up our sleeves for the next year,” the DOWN Dating Team assured us. “We’re especially focused on ensuring that we are delivering a sustainable product and getting back to basics.”

An Honest Approach to Sex-Positive Dating

The online dating scene can be rough on people’s emotions. After being strung along, stood up, and jilted, singles can forget that dating is supposed to be fun. It’s supposed to be butterflies in the stomach and giggling in the bedroom. Otherwise, what’s the point? DOWN aims to bring the fun back to the dating scene and give online daters a reason to be excited about going out and meeting new people. 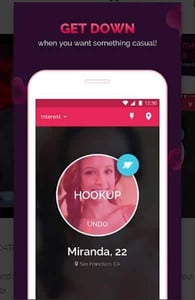 DOWN promises to make finding a local date easier than ever before.

DOWN’s tools empower singles to regain control over their love lives by being honest about their wants and needs. There’s no need to be coy here. The DOWN community doesn’t consider sex a shameful secret, and it rewards honesty. Unlike relationship-oriented dating platforms, this groundbreaking app doesn’t seek to distance itself from today’s hookup culture or deny its users the simple pleasures of a sexually active lifestyle.

“We think a lot of singles are tired of the guessing games when they get matches on other apps,” the DOWN Dating Team said. “They’re struggling to learn how to date well in this brave new dating app world. We’re aiming to lead the way to better dating and hooking up.”

With that in mind, DOWN has set itself some simple goals for 2019. The team analyzed the app’s user activity growth and decided to centralize their efforts on improving the user experience. That means a cleaner look, faster response times, and more quality matches. The team will focus on fostering a sex-positive community that delivers on its promises to users.

“We think singles want simple, honest dating with less time invested,” the team told us. “Our aim is to provide a simpler experience with more user satisfaction from minute one.”

DOWN’s decision to leave its parent company and go it alone is a bold move, but this is a time for bold moves. The dating industry is wide open, and success is within reach for anybody who can figure out how to give singles what they want. DOWN has gone all in on the idea that most singles want sex.

In the last few years, DOWN has made a name for itself in a competitive market by embracing the hookup culture and giving singles easy access to the attractive date prospects they desire. This judgment-free sex-positive community encourages men and women to pursue hot dates while keeping their sex lives on the DL.

Now that DOWN has freed itself from corporate interests, the team intends to do the job right and satisfy its users with simple yet effective matching features.

“DOWN is still about honest, sex-positive dating, so we’re still the leading pure hookup app,” the DOWN Dating Team said. “We want to spread sex positivity and honesty and help people worldwide be more successful in their dating lives.”