The Scoop: Lovevite is a niche dating app that invites its users to meet an Asian match, strike up a conversation, and fall in love. The platform appeals specifically to Chinese singles who are living and working abroad and may not know many of their compatriots in the area. About 95% of Lovevite users identify themselves as Asian, and about half live in North America. Lovevite creates a common bond across great distances by focusing on shared interests and culture as the basis for modern relationships.

Finding a potential partner who shares the same culture and values can be tricky on mainstream dating apps, especially if the ethnicity and religion filters are locked behind a paywall. Many Chinese singles have run into a scarcity problem in the general online dating scene, and that’s why niche apps like Lovevite have become so successful.

Lovevite is a Chinese dating app with an international following.

Lovevite sends a heartfelt “love invite” to Asian singles hoping to find love in their home country or abroad. The dating app started in Silicon Valley, and it has established a solid membership base in major cities around the world.

A Chinese-born tech professional named Wei Zhao was inspired to create an international dating app for Asian singles after he met his future wife online. She lived in Tokyo, and he lived in California, but online technology helped them form a solid connection. Swiping on an app changed Wei’s life, and now he aims to spark more matches in the global Chinese community.

Wei launched Lovevite as a side project in 2013. His goal was to connect Chinese expats with viable dates within their reach.

Over the years, the Chinese dating app has made a name for itself by carving out a friendly space geared toward Asian singles living abroad. About 95% of its members identify themselves as being of Asian descent. Whether they’re living in North America, Europe, or Asia, single expats can find common ground in the online dating world thanks to Lovevite.

Wei now works full time on Lovevite and leads a team of skilled professionals in the tech industry.

“We are young Chinese engineers from Silicon Valley,” the team said. “We all firmly believe that cloud computing and mobile internet can greatly improve the efficiency of online marriage and love. We are passionately turning this dream into reality.”

Search for Local Dates Within a 50-Mile Radius

Lovevite puts Chinese singles in touch with a more targeted dating community, and its tools give them plenty of say in how to navigate this brave new world. The app has optional search filters and personality quiz questions to help like-minded individuals find one another more quickly.

According to the app description, “Lovevite is a new generation of dating site. The website style is fresher, more powerful, and easier to use.” 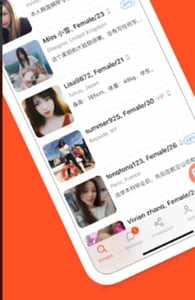 The app generates a match list based on compatibility.

The international dating app creates smaller dating bubbles with its location-based matchmaking. Users can choose to browse profiles within a 50-mile radius or roam further abroad by dismissing distance as a dealbreaker.

The Lovevite profile inquires about the user’s hobbies, opinions, beliefs, lifestyle, and other characteristics. Then its smart algorithm identifies commonalities and recommends profiles that have high compatibility scores.

Chinese singles can use this wealth of knowledge to make more informed decisions about their online matches. Lovevite’s highly refined system goes beyond looks in an effort to inspire real relationships.

Additionally, the live chat tools include text messaging, voice messages, and video calls, so couples have a lot of ways to get in touch and don’t have to leave the app to meet face to face. Lovevite’s most active users can use praise coins to contact other members for free.

Lovevite members have been screened for authenticity, and all photos must be approved by a staff member before being published on the app. Photos are typically reviewed and approved within 24 hours. A photo may be deleted if it does not clearly show a person’s face or if it contains graphic images.

Should an issue arise on the app, members can always reach out to the Lovevite team by emailing support@lovevite.com. The customer service team is responsive and personable with many years of online dating expertise behind them.

Lovevite has grown exponentially by word of mouth. Some curious online daters download the app, have a good experience, and then tell their Chinese friends about it, and then suddenly a small tech startup has become a vibrant international network. The app has received many testimonials and recommendations in the Chinese community.

“There are many high-quality overseas users,” Shelley C. said about Lovevite on Google Play. “Basic functions are free, and after answering a series of questions, you can see the matching degree with the other party, which is convenient and practical.” 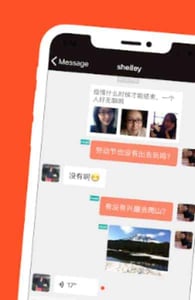 The niche app can help Asian expats feel at home.

Sarn B. said the dating platform worked well for meeting professional, high-end matches. The review described Lovevite as “the most reliable dating website for making friends and finding partners.”

A single man named Ross declared the Chinese dating app was the solution to his romantic frustrations. He said he had tried several Asian dating sites before landing on Lovevite. He praised the app for its feature-rich interface, affordable pricing, and friendly customer support.

“Lovevite is the best so far,” he said in a review in the App Store. “It allows you to send photos, leave voicemail as well as making a video call. You’ve essentially got the whole package.”

Another Lovevite user named Khris explained how the app’s communication features encourage face-to-face interactions without requiring users to do much more than press a button.

“Everyone is very happy to chat together,” Khris said. “It deepens the understanding between single men and women.”

Lovevite has earned good reviews by consistently looking out for the interests of Chinese singles and developing intelligent matchmaking features that lead to genuine connections.

Lovevite began as the passion project of a Chinese-born tech-entrepreneur in Silicon Valley, and it has become the go-to wingman for Asian singles around the world. The dating app uses advanced technology to create compatible matches and support real-time communication through text and video.

Looking ahead, Wei told us he’s interested in adding a virtual speed dating feature to the app. The new feature would pair singles in timed chats and thereby motivate them to break the ice and create a romantic connection quickly. Users can find updates about these and other future developments on the Lovevite Facebook page.

For nearly a decade now, Lovevite has aimed to change the online dating game and make it more accessible, efficient, and affordable for singles in a niche demographic.

No matter where they live, Chinese singles can come together in the Lovevite community and find attractive date options that measure up to their standards.