The Scoop: For the last eight years, DateBritishGuys.com has connected American women with British men on an international dating platform. The site has evolved over time to meet the needs of modern daters. In May 2018, the team updated DateBritishGuys.com to offer more user-friendly features, including a mutual matching system. The new version of the site is mobile-first, which means it looks great on iPhones, tablets, and all other mobile devices. Since it released its updates, DateBritishGuys has seen a 40% increase in female registrants as well as a significant increase in matches made on the site.

Ben and Becca Elman launched DateBritishGuys.com to open singles up to a new world of exciting dating options.

Clearly, something magical was happening to attract these types of singles to one another. Ben, who is British, and Becca, an American, wanted to make it easier for singles like them to start a whirlwind romance with someone across the pond, so in 2009 they started a dating website called DateBritishGuys.com.

American women flocked to the dating site in hopes of meeting a cutie with a British accent. Ben hustled to meet this high demand by recruiting his single friends, acquaintances, and even strangers at soccer matches to join the network. The dating site grew by word-of-mouth and has successfully fostered thousands of international relationships.

Today, DateBritishGuys is fully optimized for all mobile devices, and the team plans to launch an app version of the website in 2019.

Women have always outnumbered the men on the site — currently, the gender ratio is about 4 American women for every 1 British guy — but Ben said he hopes to change that imbalance by increasing the site’s visibility in the UK. The team is about to embark on an advertising push to let people know about the site’s unique membership and features.

“Our goal is to increase the number of men on the website and double our revenue in the next 12 months,” Ben said. “I think that’s quite doable.”

Mutual Matching Led to a 40% Increase in Female Members

The premise of DateBritishGuys naturally appeals to single American women — hey, it worked out well for Meghan Markle  — and the needs of single women have always been paramount to the dating site’s team. By fostering a female-friendly environment, the niche dating site has helped singles around the world feel comfortable forming genuine relationships online.

The team took a year and a half to develop, design, and perfect a new version of the dating site, which is now live. The new version is mobile-first, meaning it caters to folks browsing for dates on their phones. The site has also embraced mutual matching and offers an equal pay structure for male and female members.

DateBritishGuys.com no longer offers a free-for-all where a user can send a message to anyone on the site. Instead, the dating site has adopted a mutual matching system where singles can only communicate once both have expressed interest by Hotlisting each other. Members can see who they liked and who’s liked them in their Admirer’s Section.

While some men have grumbled over this limiting feature, the response from women has been overwhelmingly positive. In fact, the dating site saw a 40% increase in female users following the release of its new matching system. The number of matches on the site has also increased as users enjoy a more targeted way to screen date prospects. 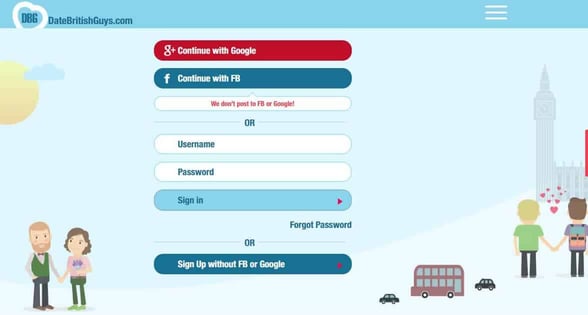 A simple and fast sign-up process encourages singles to skip ahead to the fun part of online dating.

The new site has also made the sign-up process incredibly easy and intuitive. Users can now choose to connect through Google+ or Facebook accounts (which automatically fills in their details) or sign up using a valid email address. Ben boasted that new members can join in just two clicks. By speeding up the registration process, the team hopes to dramatically reduce the bounce rate and make it easier for people to dive into online dating.

“We really wanted people to have a better experience,” Ben said. “That will lead to more matches and more members on the site, and subsequently the business will grow. That’s our expectation, and we’re already seeing the benefits of the changes after only a month.”

Online safety is a hot-button issue in the dating industry because one unsavory character can ruin the experience for someone putting his or her heart on the line. However, keeping scammers out of a global dating network is no easy task; it takes a lot of resources and vetting to spot the bad apples before they make trouble on the site.

DateBritishGuys.com has been proactive in the fight against fake profiles and spamming messages, and the platform does a fantastic job at ensuring a safe and friendly environment for singles who are the real deal. The dating site verifies the identities of new members and confirms that the men joining are actually from the UK. The system currently requires members to send photos of their IDs, but later in the year DateBritishGuys.com will have an Experian ID check that doesn’t require any IDs to be sent in.

“We don’t want people to get scammed,” Ben said. “Every user now will have something on their profile saying if they’ve been verified. That really gives a level of credibility to the website and the user.”

As an additional layer of security, members must pay $1 for a three-day trial on DateBritishGuys.com. During this time, they can test out the communication and matching features to see if it’s worth paying a monthly membership. “Most people know within three days if they want to commit to the website,” Ben said. “The reason we charge a dollar, instead of having it just be free, is because it allows us to verify the person and prevents scammers joining.”

While DateBritishGuys does collect and verify some personal information, the team has promised to keep that information private and use it only to better the site and the user experience. In the wake of so many privacy scandals and online data scares, this dating site has set a good example for how to handle sensitive user information in an ethical and responsible way.

“We have made a commitment to never sell or pass on user information to other companies,” Ben said firmly. “We’re only using customer data to improve the product and market ourselves.”

Over the years, DateBritishGuys.com has become a trusted name in the American and UK dating scene. Hundreds of singles have written to the team to say they have fallen in love, gotten married, and started families after meeting on the dating site. The platform has many success stories to its name, and the team regularly shares wedding and baby announcements on its success stories page.

Megan and Nigel are among the touching success stories shared by DateBritishGuys.

These stories usually include a picture of the happy couple, a brief overview of their love story, and a few quotes expressing their love and gratitude.

Megan and Nigel announced in early 2018 that they’re married and expecting a baby. The couple met on DateBritishGuys in 2015 and have crossed oceans to be together.

“I can’t wait for all of the new adventures life brings us!” Megan said. “I’m forever in debt to your website for helping me find the person I believe I was truly meant to spend the rest of my life with.”

What’s been the secret to their success and the loyalty of their members? Ben said it has a lot to do with the team’s commitment to improve the website according to user feedback.

“We’re always listening to our customers,” he said. “We really do take every comment we receive into consideration.”

Bridging the Distance Between Singles Worldwide

As the world gets smaller, the need for a reliable and effective international dating platform gets bigger. The goal of DateBritishGuys isn’t to be a cutesy place where singles chat and never meet — Ben and Becca designed it to facilitate lasting international relationships, like theirs, between American women and British men.

Since its launch, the dating site has welcomed singles looking to expand their dating horizons. The husband-and-wife team understand challenges daters face, and they continually dream up solutions to make things run a little smoother. Ben and Becca truly have their hearts in the right place. They have never taken a salary from DateBritishGuys. Instead, they invest all DateBritishGuys’ profits back into the site and put their efforts into improving the user’s experience.

“We’re really trying to expand our customer base and our reach as we continue to evolve the product,” he said. “We’re not finished yet. I don’t think we’ll ever be finished, to be honest.”