cMatch is a Christian-Owned Dating Platform for Serious & Sincere Singles

The Scoop: cMatch supports an online community where people of faith can get to know each other and build meaningful relationships. The dating site and app offer quality-driven services that appeal to Christian singles of all denominations. Since its launch in 2006, cMatch has been responsible for matching over 130,000 Christian singles who share similar values, backgrounds, and traditions.

A Christian man named Chris Algra entered the newly emerging online dating scene in 1999 with high hopes. He saw the potential for matchmaking technology to help him find the Christian woman of his dreams, so he created his personal ad and started matching and chatting.

His online dating experience was largely positive. The search tools allowed him to focus on the values that were most important to him and meet like-minded partners within the Christian community.

The cMatch team has taken a high-integrity approach to online dating.

“Even though dating sites were very rudimental back then, I so much enjoyed talking to other Christian singles from all over the world,” Chris said. “It’s thrilling to get a message from a cute single that you secretly have a crush on, and it’s rewarding to open up and have a deep conversation about life and faith.”

Today, Chris owns and operates several Christian dating platforms that have become popular in Indonesia, The Netherlands, Singapore, and the U.S. These platforms provide a beacon of hope for Christian singles in search of God-centered relationships.

“I became passionate about serving Christian singles, and I wanted to improve their experience,” Chris said. “From the get-go, my aim has been to offer singles a safe and clean platform where Christian values are respected.”

Christian dating sites put faith front and center in the online dating world, but sometimes that commitment doesn’t carry through behind the scenes. It may surprise people to learn that some of the biggest names in the Christian dating space are not owned or operated by Christians.

Chris has distinguished cMatch from its corporate-owned counterparts by upholding Biblical values and being as transparent as possible throughout the online dating process. For instance, the team has banned curse words and offensive language from the site and has security measures in place to make sure all users behave appropriately.

“As a Christian-owned platform, we feel we understand our audience better, and commercial success is not our first priority,” Chris explained. “This has sometimes limited our growth; however, we choose quality over quantity, as we focus on curating the best possible Christian match for our singles.”

The majority of cMatch members live in the United States. However, Chris has made a point to speak to an international audience. As a Christian man who found love in Indonesia, he is passionate about supporting global love affairs and helping expats, travelers, and missionaries spread the faith abroad.

“We want to be part of the solution: to offer a positive, encouraging story. And to help singles see themselves the way God sees them,” Chris said. “We love cultural diversity, and our profile questions are designed to introduce different cultures.”

The Dating Profile Focuses on Personality Over Looks

It’s free to download the cMatch app on Google Play or register with an account on the dating website. The free membership includes unlimited browsing and certain chat capabilities. Members can also give each other a boost and share a positive message by writing praise, which appears as a badge on the user’s profile.

Creating a cMatch profile takes about 10 to 15 minutes depending on how detailed the user chooses to get on the personal prompt, which asks “Could you please tell us something about your personal relationship with Jesus?”

All new dating profiles are screened for authenticity by a cMatch team member. It’s not an automated process. A person actually reads the profile and views every photo to determine that it is genuine. Only after the dating profile has been completed AND approved will the member have access to the cMatch database. 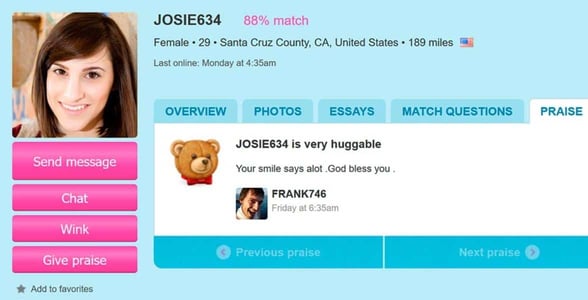 The cMatch profile gives a comprehensive view of a person’s lifestyle and values.

The cMatch profile covers the basics (first name, age, location, gender) and then dives into some lifestyle questions (marital status, living situation, profession) and background information (education, ethnicity, church denomination). The cMatch profile also has members disclose what they’re looking for on the site (friendship, marriage, penpals) and how regularly they attend church. These fields are mandatory and provide good information for the match algorithm to find compatible partners.

The cMatch algorithm was created to pair up singles based on their deeper values and long-term goals. The algorithm considers the preferences of users and those of their potential match to identify common ground and predict relationship compatibility.

“Our in-house developed match algorithm is unique and extremely reliable,” Chris said. “As far as I know, we’re the only dating site that looks at church denomination while matching.”

The founding story of cMatch began with one man’s search for love, and now it has powered an international movement. Many cMatch users have written to the team to share their success stories and give hope to other Christian singles around the world.

So far, cMatch has matched more than 130,000 singles and inspired hundreds of relationships, friendships, and marriages. Each testimonial offers a glimpse into the life-changing difference the site can make.

Scott and Raluca met on cMatch in 2010 and became fast digital friends. After months of emailing, Scott traveled from the U.S. to Romania to meet Raluca in person. The couple got engaged a year later. They are now happily married with two children and living in Germany. “Thank you, cMatch. Thank you for being a tool in God’s hands,” Scott and Raluca said.

Peggy and Bill’s relationship began with a wink on cMatch, and it has grown to become so much more. Their first date was at a church service. During prayers, Peggy closed her eyes and reached out her hand to ask the Holy Spirit for guidance, and Bill took her hand. They are now married.

“Everywhere we went, people were blessed by our love and union,” Peggy said. “Had it not been for cMatch, we would never have met.”

To date, cMatch has connected over 130,000 singles worldwide.

Singles have joined this wholesome network with a variety of intentions and goals. Some are hoping to find their soul mate, settle down, and start a Christian family, while others are just looking to create friendships and engage in soulful conversations.

Chris said the purpose of cMatch is to help individuals find both platonic and romantic connections, so they feel less alone in their day-to-day lives.

“It’s about finding friendship, self-acceptance, personal growth, and emotional healing,” Chris explained. “I’m so thankful when someone tells me she feels so much better after praying with another cMatch member. That’s when I know we’ve made an impact.”

Chris entered the online dating scene in the late 1990s to find a potential partner. And he found a career. As a dating site operator, Chris has watched the dating scene evolve over the last 20 years — and not always for the better. The modern swiping scene can leave a lot to be desired when it comes to forming deep relationships. Fortunately, cMatch has rejected the culture of instant gratification and maintained high standards with its online matchmaking.

The cMatch platform offers a quality-driven alternative for Christian singles seeking a serious relationship. From the in-depth profiles to the advanced search features, cMatch encourages users to put their hearts on the line and become more invested in their matches and conversations.

Singles can congregate on cMatch to find common ground and common purpose within the Christian faith. That’s a great foundation for a new relationship, and it could lead to a lifetime of devotion.

“Much has changed in the industry, and I believe that Christian dating platforms are more relevant than ever,” Chris told us. “We want to be inclusive and make everyone feel accepted. We focus on helping singles get to know each other better by helping them expand their profile — and by encouraging them to look beyond the first impression.”