The Scoop: ClickDate is an up-and-coming dating site that offers smart matching technology to speed up the process of meeting someone new. It takes less than five minutes to create a ClickDate profile, and the learning algorithm identifies compatibility based on each new click and match. The ClickDate dating service has reached nine countries, including the U.S., the U.K., Brazil, Mexico, and India, and it is rapidly expanding to support modern daters seeking a real partner.

User retention is a major issue in the online dating scene. It’s difficult to keep a user engaged on a single site or app when a world full of clickbait, breaking news, and other distractions are vying for their attention.

Aram Hakobyan saw this issue firsthand while working at a large matchmaking company. The tech entrepreneur realized that in-depth registration processes can actually deter singles from completing a dating profile, so he teamed up with a friend to create a solution. 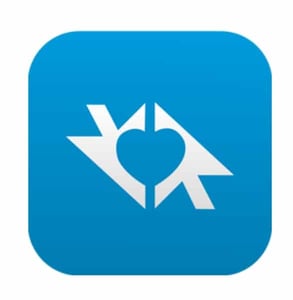 ClickDate is a new dating service with a unique matchmaking formula.

ClickDate launched to give singles a more convenient and efficient way to meet date prospects. The dating site and app has created a network that stretches from the U.S. to India.

Thanks to its quick signup and intuitive matching features, ClickDate has become a go-to wingman for singles seeking dates on their terms.

“We used a new psychology theory based on user behavior to create matches,” Aram explained. “We created a matchmaking algorithm that better understands the user based, not on what they tell us, but on how they click and date online.”

The ClickDate team has given standard matchmaking an upgrade and empowered online daters to mingle with more promising matches.

It takes less than five minutes to create a dating profile on the ClickDate platform, and the match algorithm takes the workload off the average user. ClickDate is currently available in the App Store for free. An Android version of the dating platform is in development.

The Intuitive Algorithm Speeds Up the Swiping Experience

ClickDate is a dating site that keeps things simple for the user. Its smart algorithm has replaced lengthy personality questionnaires and randomized match suggestions. And it can get to the heart of what a single person is looking for in his or her ideal partner.

Instead of asking users to describe in detail what they want, ClickDate has implemented a behavioral matchmaking system that learns what people like by analyzing who they like. That means this virtual matchmaker learns from every swipe and click on the dating site. 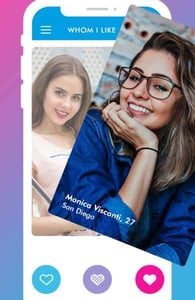 Online dating can be less stressful with ClickDate.

ClickDate has created an intuitive system where users don’t have to put their preferences into words or settings. New users can simply start sending likes to dating profiles and benefit from more accurate recommendations as they go.

“Every action the user takes can actually improve his or her match list,” Aram explained. “In this way, we are constantly improving the partners we recommend to users.”

Once a match has been established, ClickDate users can start chatting and using special features without limitation through the site or app. There is no time limit for online conversations; however, the platform will nudge users to set up a date after they’ve been chatting for a good while.

ClickDate has partnered with restaurants to provide plenty of cost-effective first date ideas and facilitate the logistics of asking a person out on a date. A couple can find a local restaurant and schedule their date within the ClickDate platform. This makes it easy for online daters to turn their online chats into IRL dating opportunities.

“We want to replicate real-life dating interactions,” Aram explained. “We are planning wide integration with restaurants to feature promotions and deals, so couples can schedule their perfect dates.”

Just remember that, even though the site allows users to move fast, it’s important to slow down long enough to screen new date prospects. ClickDate verifies the identity of its members through social media and all users are passing manual verification and approval process, but it does not conduct background checks, so the team recommends online daters follow these safety guidelines when arranging a meetup with a new person.

ClickDate appeals to more mature and serious daters who are fed up with endlessly swiping and want to turn their chats into real relationships. The majority of its users are between 40 and 60 years old. Its membership base includes singles from the U.S., Brazil, Mexico, France, the U.K., Spain, Portugal, India, and Nigeria.

By removing social barriers and refining personalized match lists, ClickDate has removed a lot of the stress and uncertainty from the online dating experience and ensured that singles can meet compatible dates without having to write out their life story.

ClickDate is a powerful dating tool known for its fast registration process and AI matchmaking, but the team isn’t content to stop there. Aram said he has major plans in the works to upgrade the ClickDate platform with new features and creative matchmaking solutions.

“We want to reduce the registration process further and make the site more engaging,” Aram told us. “We would also like to partner with gifting and floral portals like Etsy to let users send small tokens to and flowers their potential partners.” 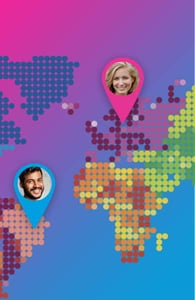 ClickDate has taken a sophisticated AI-driven approach to online dating.

As a tech startup, ClickDate also has major fundraising goals for the next year. The company is looking for investors to help foster its expansion in the online dating world.

ClickDate has established itself in several major world markets, and it is rapidly growing in the U.S., Brazil, and India in particular. Aram said he wants to put more resources into marketing the platform to single people who are frustrated with the mainstream swiping apps and sites.

Whether it’s making deals with local restaurants or adding new prompts to the dating profile, the ClickDate team brings an innovative spirit to the online dating industry. Its developers are always coming up with something new to catch a user’s interest.

One of the most exciting developments currently in the pipeline is a love tracking feature, which will allow singles to visualize how their online relationships are going and keep tabs on potential date prospects. The tracking feature will show the status of matches to remind individuals to respond to messages, schedule dates, and make sure their relationships are moving forward.

“We want to make online dating more active and engaging,” Aram said. “ClickDate is the sort of place where real people can express themselves and get to know their potential partners.”

ClickDate began with two guys hoping to make online dating easier and faster, and it has taken off in cities around the world. The dating site and app provide shortcuts to romance by making the signup process and matchmaking system much less strenuous and time-consuming for the average single person.

Online daters can use ClickDate to scout local dating prospects and take action to arrange a real-life date. The platform’s date scheduling tools have proven to be effective, and Aram said the team is currently working on more date assistance features to help singles build on their online relationships.

“Love can make the world better,” Aram said. “ClickDate is not just about selling stuff — it is to make people happy and spread the love in the world for a lifelong thing. It’s really inspiring to be such an important part of people’s lives and change their lives.”