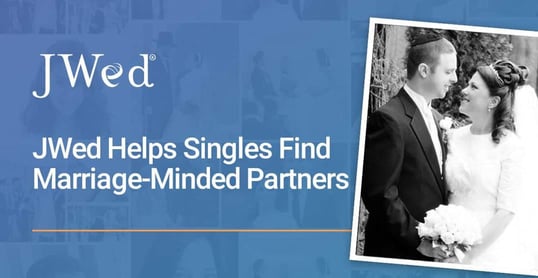 The Scoop: JWed is a Jewish dating site dedicated to helping marriages blossom. Since 2001, the team has proudly collected over 3,600 success stories from Jewish couples who met on the platform and have gotten married. During the COVID-19 pandemic, Jewish singles faced unprecedented challenges in their personal lives, and that has had ripple effects on the matching experience. The JWed team provided insights on how online technology can fuel long-distance relationships and love stories even with the backdrop of social distancing.

Since its launch in 2001, JWed has distinguished itself as one of the most successful platforms in the Jewish dating niche. It has won over members by focusing on faith-driven matches that have true marriage potential. As proof of its effectiveness, the platform publishes success stories from JWed couples who have gotten engaged or married.

Michal was living in Jerusalem and Ryan was in Cape Town when they began chatting on JWed. They hit things off and established a long-distance relationship. Many flights and Whatsapp chats later, the couple bridged the distance once and for all by tying the knot. 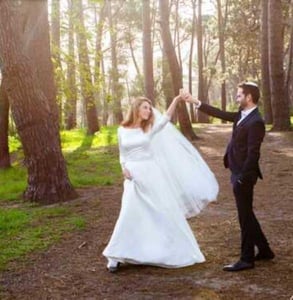 Michal and Ryan were separated by 10,000 miles when they met on JWed.

“We never ever thought that we would meet our shidduch via an online dating platform,” said Michal and Ryan in a testimonial. “JWed gifted us with this opportunity. We recommend using JWed even to the most cynical of you out there. It works. Give it a shot!”

JWed sees a lot of couples like Michal and Ryan overcoming obstacles to be together. Many members are willing to go outside their comfort zones and their geographic regions for the right Jewish partner. In fact, the majority of JWed marriages involve one person moving to another state or country for their future spouse.

During the COVID-19 pandemic, the trend of long-distance dating on the JWed site has only become more pronounced and widespread. Nowadays Jewish singles can explore the online dating scene without borders, and that can be liberating in a period of lockdowns and travel restrictions.

“Geography is still important,” said Derek Saker, the Co-Founder and CMO at JWed. “But what is more important? Someone of shared values, character, personality, and attraction.”

In the wake of the COVID-19 pandemic, many singles were faced with difficult choices and isolating circumstances. It wasn’t an easy time to date, yet many singles couldn’t afford to put their love goals on hold.

Fortunately, online dating sites like JWed were already in place and ready to accommodate the hopeful romantics of the world.

The JWed team told us that the dating site recorded an uptick in signups among young adults (ages 18 to 28) and senior singles (aged 60+). These two age groups have historically shied away from JWed — the young ones because it’s too serious and the older ones because it’s too technical. But a global pandemic seemed to cause a shift in priorities.

“The reality is the pandemic greatly curtailed socializing,” Derek said. “Singles were stuck alone at home and growing ever more lonely. Maybe online dating was the last thing on their mind before, but it became front and center under these adverse circumstances.”

While public events and social hotspots were closed, online dating essentially became the only game in town for singles hoping to meet someone new.

JWed’s membership increases also correlated to an online activity spike across the Jewish dating site. Singles appeared to be more committed to investing in the online dating experience and following up with chats and matches while living under lockdown.

Derek said he believed the COVID-19 pandemic could have a long-term positive impact on the dating world by prompting singles to be more introspective about what they want out of life. However, he warned singles not to settle out of loneliness or desperation and wind up in a bad relationship.

“Life is short,” he said. “You can’t replace the value of a soulmate, someone with whom you can grow and thrive together. What’s unhappier than loneliness is a marriage of incompatibility or abuse.”

JWed has taken up the role of a serious matchmaker, and it attracts serious daters. Many JWed members have been in committed relationships or marriages before and have strong family values. In some cases, that relationship experience has been an extra motivator to find love and commit to a new partner.

During the last year, the JWed team has tracked a growing number of divorcees seeking assistance on the Jewish marriage site.

“We have never seen so many people sign up where a divorce took place within the same year,” Derek said. “In other words, more divorces have led to a greater expedition to get married.” 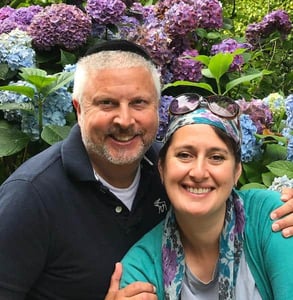 JWed has inspired thousands of Jewish people to walk down the aisle.

JWed CoFounder Derek Saker was a 49-year-old divorcee when he created his profile on the Jewish dating site — mostly out of curiosity. He sent two messages to single women on JWed and left it at that.

Within 24 hours, he received a response from a 46-year-old Londoner named Devorah. She was also a divorced single parent. The couple began communicating and found out they had a lot in common. However, shortly thereafter he felt he needed to take a break from dating, so he closed his JWed profile after a couple weeks.

Imagine his surprise 10 days later when Devorah sent a message to his work email. The subject line was “Either You Will Think I Am Desperate, a Psycho, or Just a Tenacious Woman!” It was a bold move, and the perfect way to win Derek’s heart.

“I loved her email, and we started communicating again,” Derek said. “This led to WhatsApp, calls, video calls, and in December I flew to London for the weekend.”

Derek and Devorah got engaged in New York in May 2019 and had a traditional Jewish wedding in London that winter.

JWed has inspired many Jewish singles to embark on life-changing journeys to find love and happiness. Sometimes that journey has taken singles outside their own neighborhoods to foreign shores.

Michal and Ryan lived separate lives in different countries, so they likely would never have crossed paths if not for JWed. The Jewish dating site gave them the chance to follow their hearts and create a love connection based on shared beliefs and values, not geographic proximity.

JWed can help Jewish singles who are open to traveling and finding love abroad. Its sincere matchmaking tools prioritize the interests of users and help individuals discover lasting compatibility.

It is most fitting, and surely a sign of good Jewish karma, that JWed’s Co-Founder Derek found his own love story on JWed. He is among the 3,600 success stories that began as JWed matches and ended in holy matrimony.

JWed supports serious daters as they look for their happily-ever-after ending, and that work has only become more important as the pandemic rages on around the world.