The Scoop: In the last couple years, SheKnows Media has become a leading digital media company with over 300 million followers on social media. Three industrious women in 1999 founded the company to produce informative blog posts and entertaining videos for 21st-century mothers. Over time, SheKnows.com expanded to include women from all walks of life, and its lifestyle content went viral. Today, SheKnows Media’s four online properties see over 79 million unique monthly visitors. These forward-thinking lifestyle websites support and inform women all over the world. In the post-#MeToo era, SheKnows Media has been a firm supporter of content creators and social leaders who seek change, equality, and female empowerment.

In 2006, American civil rights activist Tarana Burke began to use the phrase “Me too” to bring awareness to sexual assault. She wanted to show solidarity with survivors and encourage others to come forward to tell their stories. It wasn’t until 2017, though, that the hashtag truly took hold and started a social media surge against sexual harassment and abusive behavior.

The #MeToo movement has had crosscutting impacts on a variety of industries, toppling media giants, spurring legal debates, and signalling a global power shift as high-profile survivors stand up and speak out.

Since 1975, feminists have optimistically declared, “The future is female,” but in the wake of #MeToo, female empowerment has become more mainstream, and you can see the profound impact of the movement in today’s media.

According to the company website, “Our mission is to empower a community of women to explore, share, and pursue their passions.”

“As we continue to grow and innovate, it is crucial that we both hone existing talent within the ranks,” said Samantha Skey, President and Chief Revenue Officer of SheKnows Media, “as well as attract top talent to our expanding team.”

Every year, SheKnows Media recognizes women who have made an impact on society by making their voices heard. The Voices of the Year Change-Makers Award celebrates influential figures, including journalists, political leaders, social advocates, and other professionals with progressive ideals.

At the #BlogHer18 Health conference in January, nearly 1,000 female content creators came together to share ideas and find inspiration. During this event, the Voices of the Year celebration honored the leaders behind the Women’s March Global movement and the MeToo movement.

Additionally, the media company invited Jodi Kantor and Megan Twohey, journalists at The New York Times, to accept the Bravery Award for investigating sexual harassment in Hollywood and breaking the Harvey Weinstein story in October 2017. 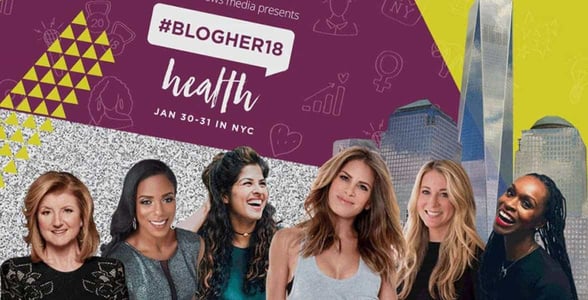 Every year, the #BlogHer conference unites inspirational women who work in the media industry.

As a staunch ally to women everywhere, SheKnows Media supports female entrepreneurs, advocates, and professionals who deliver powerful and truthful messages that inspire change in the world.

“This is what the Voices of the Year is all about,” said Samantha Skey. As President, She oversees the revenue, marketing, content, and operations for the forward-thinking company, and she aligns with many feminist leaders in the media industry. “We are thrilled to fête such an amazing group of honorees during our #BlogHer18 Health conference.”

SheKnows Media works closely with leading influencers on feminist issues. On March 9, the day after International Women’s Day, Founder of the #MeToo movement, Tarana Burke, stopped by the SheKnows Media office in Arizona to show her support for the organization’s work.

“It’s important to remember that together we can accelerate change,” according to a SheKnows Media Twitter post. “From the Women’s March to #MeToo, the movement for gender equality has steadily gained momentum in the last year — but we still need to #PressforProgress.”

The iconic orange loop on the SheKnows Media logo represents the never-ending feedback loop that “emerges from our dynamic community as its members discover, create, and share the messy, beautiful, real, and joyful moments that comprise their lives.” It’s that continuous line from inspiration to innovation that keeps the company growing.

President of SheKnows Media Samantha Skey has been a driving force behind the company’s progressive events.

In the last decade, SheKnows Media has expanded beyond the virtual world and invited its community members to meet IRL and take part in empowering conferences for society’s future movers and shakers.

Founded in 2005, BlogHer’s conference is designed to answer the question, “Where are the women bloggers?” This cleverly named creators summit bolsters passionate and talented women who educate and inspire diverse communities worldwide. In the words of the website, “We inspire, empower, and celebrate female influencers.”

The #BlogHer18 event in August is expected to be the world’s largest gathering of female content creators and social media influencers. For decades now, these conferences have helped women find their voices and deliver authentic, compelling, and insightful content for a new generation of web users.

“I found it exciting, enhancing, and slightly exhausting,” said Virginia Woodruff in a #BlogHer review on Facebook. “It was well-run, well-hosted, and they didn’t forget to include fun.”

This year, the summit will take place in August in New York City, and participants can learn more about the #BlogHer18 conference here.

SheKnows Media has over 300 million social media fans, so it’s safe to say the company knows its way around a hashtag. Building online communities is second nature to this tech-savvy team. That’s great news for click rates, shares, and mentions, but, in recent months, the company has focused its social media tools on spreading the word about important issues and connecting impassioned women with networking opportunities.

SheKnows Media followers on Facebook, YouTube, and Twitter can now take part in a serious discussion about sexism, racism, trolling, and other salient topics. If it impacts women’s lives, SheKnows Media wants to talk about it. While you’ll still see posts about Kim Kardashian or J.K. Rowling, you’ll also see content highlighting the work of female-driven organizations such as Time’s Up.

SheKnows Media creates many positive spaces for women to gather, learn, and improve. HelloFlo has a section titled Femspiration, where writers delve into important topics with an empowering tone.

From how abortion impacts trans individuals to why some women wait until marriage to have sex, the section’s content covers some rather sensitive topics by assessing recent academic studies and describing real-life experiences of modern-day women.

Stylecaster.com’s lifestyle section is similarly bold in the topics it chooses to address. The blog discusses codependency, open marriages, safe sex, sex toys, and other notable relationship and health issues. Oftentimes, the writers challenge harmful societal norms and encourage women to take charge of their own lives.

“The cultural restrictions imposed on women in the bedroom have long been overdue for a swift shattering,” writes Katie Stanovick in a Stylecaster.com article about casual sex. “We’re here to reaffirm there’s no shame in taking control of your sexuality.”

From the feminist articles on SheKnows.com to the collaborative conferences in NYC, SheKnows Media continuously pushes the envelope and develops compelling ways to draw women together and give them hope for the future. Since 1999, the digital media company has grown by leaps and bounds, now maintaining four informative and entertaining websites that address health, fashion, dating, parenting, feminism, and other lifestyle topics.

In the words of the website, “SheKnows Media is revolutionizing the publishing industry by forging a new model that seamlessly integrates users, editors, and content creators onto a single platform designed to empower all women.”

SheKnows Media’s award-winning editorial team pursues authentic stories and trendsetting content to engage a primarily female audience. Millions of readers and fans have drawn inspiration from the media company’s message and raised their voices in support, defense, or protest of social issues impacting women around the world.

“We’re in a time when women are storming the gates — both literally and figuratively,” according to a recent SheKnows article. “There’s no time like the present to champion women who are working to make the world a better place.”