The Scoop: Sleep As Android is a sleep app that helps users follow a regular sleep schedule. It plays lullabies, tracks sleep cycles, and uses natural waking alarms that are gentle and effective. The app has tools to correct snoring and unique alarms to get the user out of bed to solve puzzles or scan a barcode — rather than hitting a snooze button. Sleep As Android can integrate with other smart health technology, including Google Fit, S Health, and Zenobase, to support singles and couples as they progress toward better sleep patterns and a healthier lifestyle.

At the outset of the COVID-19 pandemic, many industries changed overnight. Business leaders all over the world had to adapt to a new normal and figure out a way forward.

Petr Nalevka has developed 26 apps, including Sleep As Android, so he’s no stranger to coming up with new ideas to fit a changing market. He gathered his team in a brainstorming session to determine what they could do to help people take care of themselves during this crisis. 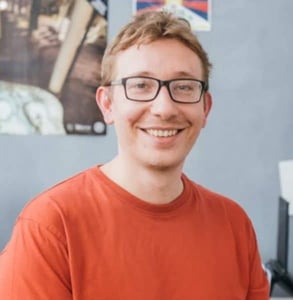 Petr Nalevka is an experienced developer who created Sleep As Android.

“Fighting back with technology is what we are good at,” Petr said. “We considered a few options such as utilizing 3D printing or working on Bluetooth contact tracing apps.”

At the end of the day, the team decided the Sleep As Android app was already perfectly suited to meet the needs of those losing sleep over financial concerns, health concerns, and relationship concerns. After all, so many singles and couples needed a good night’s sleep to prepare them to face the challenges of  tomorrow. So that’s where Petr put his focus.

Throughout the past year, Sleep As Android has doubled down on its sleep-reinforcing technology and provided hacks for a restful night and peaceful morning.

The app’s simple yet effective tools have proven invaluable for singles with high anxiety and trouble sleeping, and it can be a good solution for couples trying to get on the same sleeping and waking schedule.

Petr Nalevka said the main task for Sleep As Android during the COVID-19 pandemic is to continue to support a bedtime routine that eliminates stress and strengthens healthy patterns.

“I think the pandemic has shown us all how important our health is,” Petr said. “Nobody can do it for you, you need to do it yourself. Only you can set up a healthy lifestyle, and this consists of healthy nutrition, activity and healthy sleep!”

Sleep As Android is on a mission to make at-home sleep monitoring more accessible to the average smartphone user. The app has simple functions that have integrated with the new Google Sleep API to track sleep quality and duration. The app relies on ambient light and accelerometric sensors to record the sleeper’s activity with minimal battery impact for the smartphone.

Even if users forget to press start on the sleep tracker function, Sleep As Android can still use phone activity data to estimate the duration and regularity of their sleep.

In November 2020, Sleep As Android released heart rate variability tracking to show users how successful their sleep was at relaxing their body throughout the night. This can be an important data point for singles who are not getting enough quality sleep despite spending many hours in bed.

“We have worked hard to simplify the user experience and explain everything,” Petr said. “There is a new tutorial which guides new users through the most significant features of the app. We have worked hard to make the app more visually appealing and, more importantly, more understandable.”

Sleep As Android does more than just track sleep. The app also uses natural alarm systems to encourage optimal wakefulness and productivity. The alarms have been designed to be gentle and not jar a person out of a deep sleep.

Sleep As Android has soft birdsong alarms as well as alarms that only stop when a person completes a puzzle, exposes their phone to a bright light, or gets out of bed to scan a barcode. The CAPCTHA feature can be an effective way to motivate a person to wake up — but it can also be fooled by an inventive sleepy person.

To deter sleepy cheats, Sleep As Android invites users to place a $1 wager that they’ll wake up by performing the CAPTCHA properly. Failing to do so will not only make a single person late but also cost them money.

“This app is unbelievably advanced,” said one user. “It’s like some accidentally released secret military technology that’s light years ahead of anything I’ve seen before on a phone. I feel like a James Bond with this thing.”

Pandemic Lockdowns Sparked a Wave of Interest in Self-Care

When the COVID-19 pandemic began in 2020, Petr and his team got to work studying sleep data to find out what was taking place on the ground at certain hot spots, including Wuhan, Italy, and New York. A research team gathered data voluntarily provided by 100,000 users around the world.

“Surprisingly, we found out that lockdowns did actually make a significant portion of the population sleep healthier,” Petr said. “On average, people slept 20 minutes longer during the first wave of the pandemic!”

Petr noted that this sleep improvement trend was most prominent among people who were not frontline workers and could work from home in lockdown. In some ways, the lockdown life put an abrupt halt to unhealthy sleep practices. Business professionals were no longer beleaguered by jet lag, and bartenders could actually sleep through the night.

“There is a noticeable reaction to the pandemic around most of the world,” according to Jeff Huang, an associate professor at Brown University. “People woke up later at the start of the pandemic, and in some countries, this returned back to normal around September.” 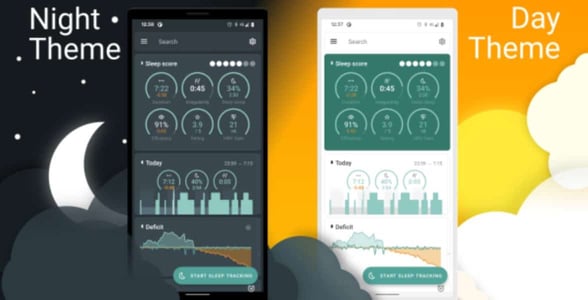 Sleep As Android provides insights into the quality and duration of the user’s sleep.

Sleep As Android has monitored sleep data on a macro level while helping single users track their own sleep on a micro level. The Sleep Score visualizations show a pie chart of eight dimensions (snoring, HRV gain, breath, etc.) that are important to a good night’s sleep. The chart makes it clear which areas have room for improvement, and it can motivate users to maintain healthy habits.

“I think it is very important to keep an optimistic mind,” Petr told us. “What has shown to be really toxic is delaying sleep and watching all these terrifying news in the TV or on social media. It is really important to give yourself a break from that.”

Petr recommends unplugging before bedtime to reduce the likelihood of insomnia. He created the Digital Detox Challenge to shield users from toxic social media feeds. This can be a particularly helpful way to keep couples from getting distracted by their phones while on a date.

“We have seen that we cannot watch health just in the hospitals,” Petr said. “We need to do much more about our health at home or remotely — including many new opportunities for at home diagnostics.”

Sleep As Android Contributes to a Healthier Society

During the COVID-19 pandemic, Sleep As Android has carried on its quiet work of measuring sleep and cultivating restfulness. The team has done research and developed new technologies to support people through the ups and downs of pandemic life by fostering a good night’s sleep and a good morning’s wakefulness.

Sleep As Android has used smart technology to ensure its users don’t lose sleep at night. The app’s tracking capabilities, creative alarm systems, and integrated health monitoring can make a difference in a single person’s nightly routine, particularly if used on a consistent basis.

Whether you’re battling insomnia or struggling to wake up on time, Sleep As Android can lay the groundwork for a lasting lifestyle change.

Couples can also benefit from using Sleep As Android together and tackling their sleep goals as a team.

“Sleep as Android is here to help you build a good habit and notify you when it is time to go to bed. It can even play you a lullaby to relax your mind before sleep,” Petr said. “Your partner can support you and challenge you to keep up with your healthy sleep goals. You can both set up sleep targets for any of the measured dimensions and track your progress.”