The Scoop: Romance scams involve fraudsters who pretend to have feelings for others they meet online only to steal their money. This type of scam was the most commonly reported to The Canadian Anti-Fraud Centre (CAFC) in 2020 — though experts suggest that less than 5% of all fraud is ever reported. The CAFC aims to centralize and distribute information about internet fraud to raise awareness about scams before they hurt more people. According to the CAFC, the best way to avoid romance scams is simply knowing they exist, and no matter how close singles feel to someone they met online, they should never send that person money.

Georgina, a single older woman, started using Facebook to connect with her friends and family. However, she also met a man named Jim, who told her that his wife had died of cancer — just as Georgina’s husband had.

They soon struck up a relationship. Jim told her that he was living in Nigeria, collecting gemstones for a shop he wanted to open. He told her that he needed cash to import the gemstones, so Georgina sent him some money.

Jim’s saga intensified. First, he needed more money to pass customs in Malaysia. Then, he was arrested for smuggling and requested even more money for a lawyer and court fees. Georgina gave him the money thinking they would soon be together.

The Canadian Anti-Fraud Centre identifies romance scams and encourages consumers to report them.

It wasn’t until Georgina ran out of money — and went to the police for help — that she realized she had fallen victim to a romance scam. It was unlikely she’d get any of her money back.

Georgina is far from the only person to fall prey to a scam on the internet. Scammers lurk on social media and dating platforms and often develop relationships with victims before requesting money.

Jeff Thomson, a spokesperson for The Canadian Anti-Fraud Centre (CAFC), said that romance scammers swindled more money from Canadians than other types of fraudsters in 2020.

“Victims lost more than $18.5 million Canadian dollars in 2020, and that’s only what was reported. We think we only capture about 5% of all fraud,” Jeff said.

Sometimes scammers can ask for exorbitant amounts of money. In 2019, for instance, an American woman gave $500,000 to a fraudster while a Canadian man lost more than $700,000 dollars in a scam. The FBI notes that romance scams were the second-costliest scam in the world in 2019, with victims worldwide losing more than $500 million.

The CAFC aims to help singles avoid those scams by exposing their existence and educating the public on what they look like. The organization also offers reporting resources and details about what people should do if they think they have fallen victim to a scam.

Romance scammers use various tactics that make them stand out from genuine profiles on dating sites and social media platforms. First, their pictures may look overly posed, and they may even be holding up products. That is because scammers often steal model photos.

What’s more, many fraudsters say they are North Americans or Westerners but write messages with typos, misnomers, or awkward phrases. If someone purports to be well-educated, but their language skills don’t match, singles on dating sites or social media platforms should be wary of a scam. 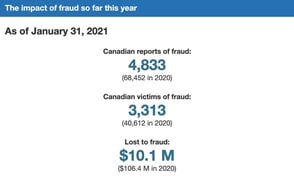 Many Canadian consumers have already fallen victim to fraud in 2021.

Next, scammers often profess their strong feelings soon after meeting online. If someone is unduly affectionate after a few hours of chatting, that should set off red flags.

“We know that fraud is designed to evoke emotions. When emotion — love, elation, fear — is involved in decisions, they can be clouded,” Jeff said.

Another tactic used by scammers is asking victims to use another communication platform, including texting or email. Dating sites often have tools that allow users to report fraud, which, in turn, gets the fraudsters banned. So, if a scammer suggests another communication method, it’s best to steer clear.

Many singles continue to overlook those warning signs and develop relationships with scammers. That is when the fraudsters ask for money, often concocting more elaborate schemes like the one Georgina described.

“Fraudsters always have every excuse not to see their victims. Or they send money for the scammer to take an airplane for a visit, and then there’s an emergency, and they ask for more money,” Jeff said.

Highlighting New Scams to Watch Out For

Romance scams may be one of the most common internet frauds, but people should be wary of the many other types of fraud. The CAFC list of fraudulent activities includes phishing scams, fake learning and loan websites, and even unscrupulous pet adoption platforms.

Jeff noted that the COVID-19 pandemic has produced many new twists.

“Every situation creates an opportunity for fraudsters to target their victims. With more people working online from home, the future has been a factor. People being restricted and isolated in their homes can lead to people hopping online who haven’t before,” Jeff told us.

A new romance scam variation has recently emerged: investment scams wrapped up in romance. After developing a relationship, a fraudster will offer an investment opportunity.

“Instead of asking victims to send a stranger money for an emergency, they’re offering a chance to make money. Be aware of anyone asking you to invest. Those scammers will focus on urgency, stress, and guilt,” Jeff said.

One of the reasons scams continue to increase is that police stations across the Canadian provinces don’t always communicate with each other. That can allow scammers to move around to avoid detection. For instance, a victim in British Columbia and a victim in Nova Scotia could fall prey to the same scam, but the police might not connect those dots.

One of The CAFC’s key goals is to collect and source scam information in a single repository. The organization also aims to shut down scams when it can.

“We have a toll-free number to report fraud or file a report through our website. When we can, we use the information we collect to notify email service providers, telephone companies, and financial institutions of fraud accounts so they can shut them down,” said Jeff.

One of the hurdles to preventing romance scams is the shame that victims feel after entering fake relationships. Romance scams involve soliciting companionship and building trust to steal money.

Victims not only face financial consequences but also emotional and psychological ones.

“A scam of trust can make people less likely to report, but they’re causing devastating effects to victims,” Jeff told us.

Sometimes, the CAFC staff even has trouble convincing victims that their relationships were inauthentic.

“We have to share similar profiles or stories with other victims. In some cases, we can recite the story the victim has been provided almost word for word. Only then does it hit home,” said Jeff.

After 20 years of working at the CAFC, Jeff said he has seen scams — especially romance versions — increase in complexity. Fraud continues to rise as scammers develop new ways to target victims and con them out of money.

“We’ve heard stories of people who have lost their homes, retirement savings, everything. Sometimes, we hear about suicides, as well. We hear these heartbreaking stories,” said Jeff.

Singles can still build relationships online without fear of romance scams. The most important step is to be wary when getting to know someone. If anything seems too good to be true, it probably is.

“Fraud awareness is key. Respond with scrutiny, not with emotion. And remember, never send money to strangers; they’ll always have an excuse not to meet. We don’t want this happening to anyone else, so let’s get the message out there,” Jeff said.