The Scoop: The World Axe Throwing League (WATL) has brought universal standards to the popular sport of axe throwing. As this recreational activity has gained momentum, WATL’s tournaments have become the social events of the year in certain circles in the dating scene. Whether you’re looking to score points with a partner or strike up conversation with a new person, WATL can help create exciting social opportunities in a dynamic urban environment.

Since its establishment in 2017, The World Axe Throwing League has thrown its support behind the sport of indoor axe throwing and united recreational clubs in 22 countries, including the U.S. and Canada. It is currently the largest professional organization for axe throwing in the world.

WATL has over 2,500 league members and 275 member affiliates that host widely attended tournaments on a regular basis.

WATL has endeavored to transform the pastime of axe throwing into a legitimate competitive sport.

By networking with the top names in axe throwing, WATL has been able to standardize rules and institute universal safety protocols for this up-and-coming sport.

WATL Founder and Commissioner Mario Zelaya has been a leader in this space for years. He started Bad Axe Throwing in Toronto in 2014 and has been a passionate advocate for the recreational activity ever since.

The WATL organization has grown in scope and size to support a community of like-minded people who enjoy kicking back with friends and throwing an axe (or a hatchet) at a target.

Over the last few years, axe throwing has become a trendy activity for first dates, bachelor and bachelorette parties, and even anniversary celebrations. Dating and married couples have zeroed in on axe-throwing leagues as their ideal romantic entertainment because it gives them something fun and physical to do without being overly tiring or difficult.

WATL has done everything possible to legitimize and popularize the sport of indoor axe throwing. In 2018, the organization hosted the first worldwide competition for the top axe throwers in the world, and it continues to promote national and international events geared toward the axe-throwing community.

“Even though it’s been three years, it still feels like it’s early days for us,” said Blake Bottrill, Marketing & Content Manager. “We created this league to bring the community together just as the sport was picking up steam.”

A Competitive Sport Hits the Mark With Outgoing Couples

WATL has seen people from all walks of life — old and young, big and small, male and female — come together to try their skill at axe throwing. Axe throwers enjoy the satisfaction that comes from hitting a target and competing for fun, for prizes, and for bragging rights.

The WATL tournaments have participants ranging from an 8-year-old girl from Iowa to a retired professor in Calgary. There is no age limit on this laid-back recreational activity. Anyone who is strong enough to hold and throw an axe is eligible to take part in the fun.

WATL has helped axe-throwing facilities and axe-throwing enthusiasts organize into leagues and maintain regular tournaments and competitions that bring people out of their shell. 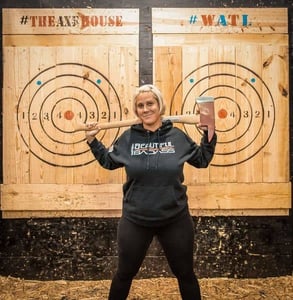 Axe-throwing leagues foster a spirit of laughter and friendly competition.

By joining an axe-throwing league, couples can try something new together and make inroads in a unique social community.

“It’s great for people who are looking for an alternative for something to do for a date night,” Blake said. “A lot of places refer to axe throwing as bowling 2.0.”

Blake said he has heard stories about league members finding romance at their local axe-throwing facility. A couple in Denver met while competing in the same league and are now engaged to be married — and they continue to throw axes on their date nights.

WATL has provided a platform where axe throwers can rally around an activity they love. Individuals who join the league can discover a new hobby and new friendships at the same time.

WATL tournaments offer a family-friendly date activity that can give couples a reason to cheer each other on or try to one up each other’s throws. It’s a fun way to make memories alongside friends and loved ones and enjoy some friendly competition during an evening out.

“A lot of couples enjoy competing and pushing each other. It helps strengthen their relationship,” Blake said. “And it’s a great way for couples to meet new people and make friends in the community.”

WATL has helped to establish a fun battleground for enthused axe throwers all around the world. Its annual tournaments take place throughout the year and culminate in the world championship in December.

During the 2020 coronavirus pandemic, WATL had to readjust its schedule and cancel some of its popular events and competitions; however, it is now working its way back to full swing — as safely as possible.

The WATL team is currently organizing its 2020 world championship, which is scheduled to take place December 4-6. Over 128 competitors are planning to come and take their best shot at winning the axe-shaped trophy — and earn the title of the World Axe Throwing Champion. 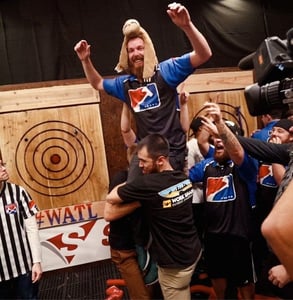 Bad Axe Throwing will host the competition at its 12,000-square-foot facility in Atlanta, Georgia. The event will be for league axe throwers only, and the organizers will ensure there is enough room for social distancing.

The World Championship will not have live spectators this year, but it will be broadcast live on ESPN, so fans can still watch the competition.

In 2021, WATL will make rule changes to allow league members to rack up points by attending (and winning) multiple tournaments leading up to the world championship.

“We’re really excited about next year,” Blake told us. “We’re going to be changing up the structure of the league and introducing the idea of a pro league.”

Couples can throw their lot in with the pros at competitive events across the U.S. and Canada. It’s a great opportunity for couples to improve their skills, hone their throwing techniques, and socialize with a fun and diverse crowd of axe throwers.

WATL Aims to Bring a Global Community Together

WATL is open to people of all ages and abilities. It doesn’t require a lot of experience or athleticism to throw an axe at a target, and the beginner-friendly aspect of the sport has been a major part of its appeal worldwide.

Many couples have embraced axe-throwing as part of their dating routine, and joining a league can help them get to know others who love the sport just as much as they do. The WATL organization has grown by leaps and bounds over the last three years as more and more league members have sought out its competitions, tournaments, and league events.

Blake said WATL is constantly fielding requests from people asking for more community engagement and axe-throwing opportunities — and this league organization is naturally eager to oblige and give its members a reason to compete and play together.

“It adds a little bit of healthy competitiveness into a relationship,” Blake said. “Pretty much anyone can get into axe throwing if they want to because it’s more about finesse than strength.”