ManTalks Teaches Men How to Improve Their Lives and Romantic Relationships

The Scoop: Men often socialize in competitive settings and seek out unhealthy encouragement, which can lead them to feel unfulfilled in life. ManTalks Founder Connor Beaton understands what that’s like, which is why he offers programs, podcasts, and a blog to help modern men tackle the issues they face. ManTalks supports men in navigating life’s challenges — including emotions, traumas, and pressures — so they can become empowered in both their professional lives and personal relationships.

Men tend to socialize in competitive settings, which can be good or bad — depending on the individual. Negative peer pressure is also more common among men and may serve to perpetuate harmful masculine ideals.

When problems become overwhelming, men often need support outside of the social structures that society has led them to build. Connor Beaton developed ManTalks as a platform that empowers men to become leaders in their relationships and professional careers. It accomplishes that through a blog, podcast, and programs designed to help men break down barriers within themselves. 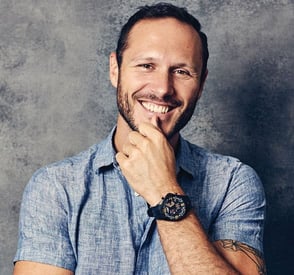 Connor Beaton founded ManTalks to help men connect with themselves and improve their relationships.

“We, as men, have lost spaces where we can be challenged by other men in healthy and positive ways,” Connor said. “When you’re in competition with other people, you’re not talking about and showing your weaknesses — or even perceived weaknesses. I think that’s because there’s a large stigma around men and mental health.”

ManTalks is a grassroots motivational movement to provide men with the tools and training they need to create the lives they want — not those they believe they should have. Participants can identify obstacles in their lives, which they often create themselves, to overcome problems and find lasting fulfillment and happiness.

Connor calls the concept being “self-led” and said that it’s crucial for both men and women to make relationships work. He also understands that gender roles are different and can be challenging to balance today.

Launched by a Founder Who Saw Challenges in His Own Life

Connor said he first had the idea for ManTalks when he realized how many empty conversations he was having with his male friends. He wanted to discuss emotional and mental health issues — but that wasn’t something most men wanted to talk about.

“I had to uphold what I thought I was supposed to be to maintain validation, acceptance, power, praise, and status,” he said. “There was a significant price I paid for that, and it wasn’t rewarding or fulfilling. After life fell apart, I realized there were a lot of guys living life like that.”

According to Connor, men often sacrifice their mental health in exchange for a life that isn’t as fulfilling and meaningful as it could be. For example, some men may focus solely on financial success, but when they achieve that success, they see that there’s a lot more in life they were missing.

It’s not a common topic in modern society, but many men have a hard time creating the life they want for themselves and their loved ones. That is especially true for men in relationships who are struggling due, in part, to what Connor calls “emotional constipation.”

Unlike women, men may not know how to show their feelings and honor their emotions.

“I saw a lot of men were trying to hide their brokenness,” he said.

That’s why he started ManTalks, which helps men of all races and ethnicities from all over the world engage in sometimes difficult conversations. ManTalks users are mostly men between the ages of 30 and 60, and they come from all different religious backgrounds and relationship statuses.

Connor covers a variety of topics on his podcast and blog, but most focus on relationships.

“These are men who are looking to improve their relationships in some capacity, perhaps after divorce or infidelity,” he said. “A lot of men are in a relationship with someone they love, and something isn’t working. They’re trying to understand what’s happening.”

ManTalks offers two primary programs. The first is known as The Alliance, an online group with hundreds of men who participate in a weekly group call led by Connor. He facilitates a conversation on a wide range of themes. He works with the guys one-on-one and has them split into smaller teams that hold weekly meetings. 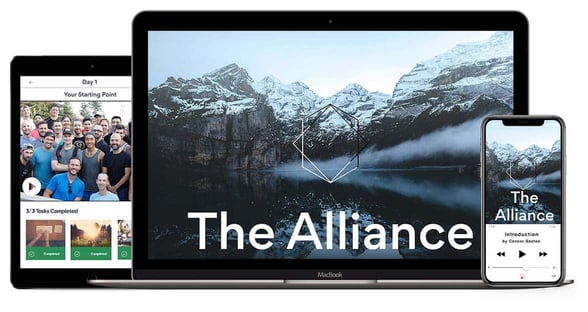 The ManTalks Alliance program allows men to work together toward common goals.

Then, there’s the Men’s Self-Leadership Training Program, which is a 12-week course focused on what’s known as shadow work.

“That’s a term coined by Carl Jung, a 20th-century psychologist. In the self-leadership program, we talk about what blocks get in the way, what obstacles men face when trying to lead themselves through their lives, business, kids, and relationships,” Connor said. “There’s a lot of getting past the abuse guys have experienced in their childhood or their affairs or infidelities.”

This group meets for an hour and a half each week. Then, each of the eight participants meets individually with Connor. Everyone also gets paired with an accountability partner, who provides even more support as participants continue their journey.

ManTalks: Tips and Wisdom for All

Connor said that both men and women often listen to his podcast, which he uses to explore a variety of topics, including astrophysics, sex therapy, and neuroscience — anything that he thinks listeners will find interesting.

“It’s not talking about masculinity week after week. It’s relationships, quantum psychics, and a broad array of topics. The main topics are relationships and self-leadership with money, family, friends, or business,” he said.

He hopes his work can free men from the dreaded imposter syndrome or, perhaps even worse, self-sabotaging their sex lives and relationships.

“A lot of men haven’t cried in two decades. They’re emotionally constipated for months or years, just numbed out,” he said. “Their partners haven’t felt loved by them, and their kids don’t feel understood by them. We help men connect with these emotions, the deeper kind of feelings, and their own wants and desires.”

Connor also finds the work deeply gratifying. He said that helping other men heal and become better versions of themselves allows him to do the same.

“The work we do, in some ways, helps push men out of their comfort zones and does so by helping them address the aspects of themselves that cause havoc,” he said. “Sometimes it’s not sexy work, but we help men get honest about their relationships.”