The Scoop: In 1954, Chef François Haeringer opened L’Auberge Chez François, a restaurant that has become an institution in Washington, D.C. His son Jacques now runs the romantic eatery, and it serves up classics from the Alsace region of France. L’Auberge Chez François creates memorable experiences for couples with its prix fixe dinner menu and award-winning wine selection, and the restaurant’s pleasant location in the Virginia countryside makes couples feel like they’re making a quaint escape on date night.

Couples in Washington, D.C., who feel cooped up from months of quarantine often decide to get away to the Virginia countryside. There, they can find space, peace, tranquility, and a romantic French restaurant that has served couples since 1954.

L’Auberge Chez François is located just outside of Washington, D.C., and diners travel to the restaurant from around the country for its atmosphere and authentic menu.

Before venturing inside, couples can stroll through the restaurant’s grounds and gardens. L’Auberge Chez François grows both produce and flowers for use in its restaurant, and whatever it can’t grow, it buys from local organic farms and small producers.

L’Auberge Chez François also looks like it was transported from the French countryside with its white stucco and wooden-panel exterior and its handmade stained glass windows. 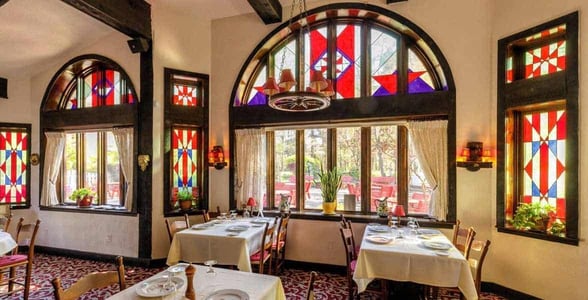 L’Auberge Chez François looks like it belongs in the French countryside.

Once seated inside, couples can order from a prix fixe menu, which includes seven courses and a coffee or tea. Many diners opt for Chef Jacques Haeringer’s specialties, including a popular roasted beef tenderloin served with seasonal vegetables, Béarnaise, and truffle sauce as their entrée.

Couples can top off a special date night by ordering crémant, a fizzy, Alsatian sparkling wine. Everything on the menu is inspired by cuisine from the Alsace region of France, where L’Auberge Chez François Founder Chef François Haeringer is from.

No matter what a couple decides to order, they can be sure that the recipe stands the test of time.

“If an item doesn’t sell, we don’t keep it on the menu. Some items are more popular than others, so over time, we take things off in favor of items that are more appreciated,” Chef Jacques said.

When Chez François opened in 1954, Chef François brought the cuisine that he’d grown up with in France to the American restaurant. Alsace, where François grew up, is an agricultural region known worldwide for its delicious produce and memorable wines.

The restaurant’s original location was in downtown Washington, D.C. In its first iteration, the restaurant served French classics in a less upscale dining room.

In the 1970s, the Haeringer family decided to find a different location for their restaurant.

“We bought this quaint country store in Virginia for the restaurant’s new location. It used to be an antique shop,” Jacques said.

In 1976, the restaurant reopened in its new location in the countryside of Great Falls, Virginia, and changed its name to L’Auberge Chez François. Though it was far from the hustle and bustle of downtown — both mentality and physically — Chez François held on to its customers. The restaurant became a place where couples and families enjoyed visiting for special occasions.

“We became a destination restaurant as opposed to a downtown restaurant. We went a little more upscale than we had been and found our niche. We started getting a lot of date nights, birthdays, and anniversaries,” Jacques told us.

The move was a smart one for the restaurant, which continued to grow its brand and name recognition. Now, L’Auberge Chez François is voted one of the most romantic restaurants in the Washington, D.C., area year after year, and celebrities often make the trip to dine there.

“Every president since Truman, except Trump and Obama, has dined here. We’ve had Mick Jagger, and next week we’re having a Supreme Court justice come in,” Jacques said.

Continuing to Thrive During COVID-19 Challenges

One survey suggests that more than 100,000 restaurants have shut down due to COVID-19. L’Auberge Chez François has weathered the storm of quarantine and shutdowns surprisingly well.

“We’re pleased that we’ve been able to survive in the notoriously difficult restaurant industry for over 65 years,” said Jacques.

When shelter-in-place orders took effect, L’Auberge closed for three months to plan its transition. When the restaurant reopened, it offered outdoor dining on the grounds of its 6-acre property.

Couples on date nights could opt to dine inside a serre, or greenhouse, that kept them warm in the cooler fall temperatures. One diner noted that the new setup made her feel like she was in the Alsatian countryside. 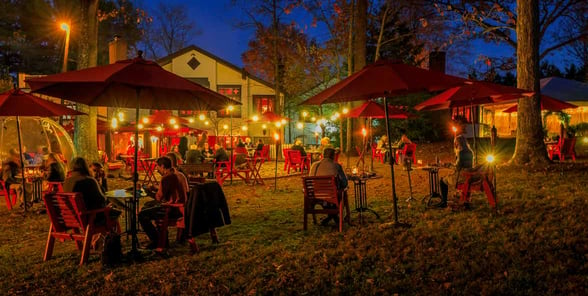 Diners who sit outside may feel like they’re in the Alsatian countryside.

As temperatures started to drop during the fall, the restaurant removed some tables to reopen its five themed dining rooms so patrons can stay warm while social distancing. While that means the restaurant won’t have as many diners as before, Jacques said he is confident that the restaurant will be fine.

“There are very few experiences now since we don’t have movies or theaters. So people are coming here for the experience. We see license plates from many different states in the parking lot,” Jacques said.

Couples still choose L’Auberge Chez François for date nights because they trust the restaurant. Jacques and his team think that it’s because diners tend to choose establishments they have confidence in.

“They know we’re going above and beyond the COVID-19 requirements and more. That has helped us keep our business the way that it is,” Jacques told us.

L’Auberge Chez François has built a group of devoted fans over more than 60 years in operation. It has also become a destination for couples and families celebrating special occasions. Long-time patrons continue to travel to the restaurant to mark their memorable events, a new generation of diners is also making the restaurant part of their lives.

“A younger population of people have been coming here since their grandparents brought them when they were young. Now, they’re bringing their own children,” Jacques said.

The restaurant has also been courting a younger crowd by opening a less-formal brasserie and developing an active social media presence. L’Auberge Chez François also hosts regular events during which it showcases fine food, wine, craft beer, and live music.

For instance, couples can choose to attend a musical brunch or a wine tasting dinner. The restaurant hosts events like those to shake up the routine.

Still, L’Auberge Chez François won’t disappoint its dedicated diners — or its founder François — by moving away from a traditional French menu.

“We do the French classics without apology. A classic by definition is something that’s withstood the test of time — with our little twist,” Jacques said.

That attitude has made L’Auberge Chez François a place where couples and families have celebrated date nights and special occasions, including engagements, weddings, and anniversaries.

“We want to be the keeper of people’s memories. That weighs heavy on me. That’s why I want perfection in my staff and my kitchen,” Jacques said.