MANCAN Wine: Innovative Wine for Adventurous Daters Who Want to Skip the Beer

The Scoop: Couples wanting to ditch the beer and try something a little less filling often turn to wine. But wine bottles and stemware aren’t always a good idea when having a special evening at home, at a bar, the beach, or other lively locations. MANCAN Wine pioneered wine in a can that does away with both the inconvenience and the pretense. The brand’s most popular product, Graham + Fisk’s Wine-In-A-Can, comes in four delicious varieties that daters can enjoy for Valentine’s Day or whenever and wherever.

Fisk Biggar’s friend Graham Veysey was sitting in a craft beer bar back in 2014. He had just finished his shift working at a construction company and was ready for a relaxing drink — but he didn’t feel like having a beer.

Even as many people still enjoy beer, the desire for something a little less filling is not uncommon. According to a Gallup poll from 2019, 38% of respondents said they prefer a beer when they want an alcoholic drink. Wine and liquor were tied for the second-most popular beverage.

However, beer can make people feel lethargic and less sexy, according to a study published by the British Medical Journal. The study also showed that liquor made people more aggressive and more likely to feel ill.

Many couples enjoy wine, but struggle to enjoy it with their active lifestyles. They also may visit bars where wine is left for days in between customers ordering it. Fisk and Graham recognized there should be another choice besides stale wine, a hangover, or a beer gut. 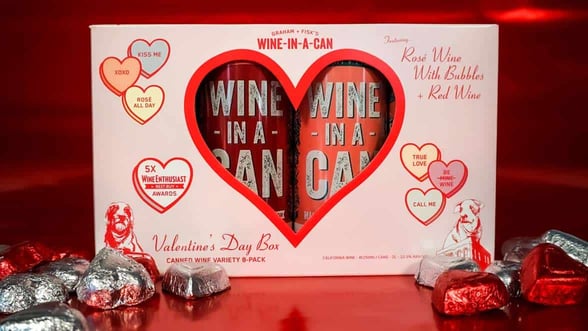 That’s how Fisk and Graham got the idea for MANCAN Wine, a canned wine that has soared in popularity since its launch in 2015.

One of the company’s most popular products is called Graham + Fisk’s Wine-In-A-Can, named after its innovative founders. Wine-lovers can also order Valentine’s Day Boxes for a significant other, with guaranteed delivery if they order by Feb. 5.

“Everyone was drinking craft beer, but Graham wanted to drink wine. He looked behind the bar, and every bottle that was there was probably opened for two weeks,” Fisk said. “It isn’t going to be very good. He thought, ‘Why isn’t there wine in a can?’”

Daters can find the brand throughout the United States at large retailers like Walmart, Buc-ee’s, and Whole Foods Market.

And couples can easily enjoy MANCAN Wine on the beach, at a picnic, or with friends at a backyard BBQ while leaving the wine glasses at home.

On a Mission to Make Wine Easy and Awesome

After that night at the bar, Graham called Fisk, and the two collaborated to open the first exclusive canned wine company in America. While the concept was simple, the execution was not.

“We were on a mission to make wine easy and awesome through the delivery device of a proven vessel like a can. Then we got to work,” he said. “We didn’t want to make the mistake of giving someone their first canned wine and having them think, ‘Ugh, I never am going to be drinking canned wine again.’ We’re going to be drinking this stuff all the time, so we better like the wine.” 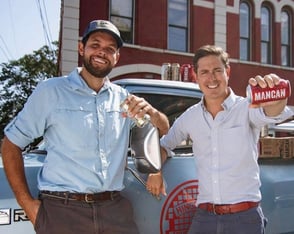 MANCAN Wine Founders Fisk Biggar, left, and Graham Veysey spoke with us about their inspiration for starting the company.

The friends set out to get an in-depth education about making wine. They traveled to California and met with a winemaker who has more than 30 years of experience in the industry.

The goal was to create blends that weren’t just delicious to the founders but that also had universal appeal to those with many different preferences. In 2015, the team launched its product in a San Francisco Bay area store. According to Fisk, the experience was like jumping into the deep end.

“At the time, people thought we were crazy,” he said. “We proved that there was a market for this and that people wanted to take it to the park with them. They wanted to put it in their fridges.”

Winning over daters and wine enthusiasts isn’t easy for any vineyard or wine company. It was even more challenging for a brand like MANCAN Wine that was looking to disrupt the industry. Fisk said that initially they set up booths at festivals in San Francisco to offer free samples, and many people simply said, “No.”

However, it wasn’t long before people started coming around to MANCAN Wine and its delicious and versatile wine cans.

Cans are Tried-And-True, Yet Innovative for Wine

Fisk and Graham opened their business headquarters in a firehouse that dates back to 1854. Then, they towed a 1969 Corvair Ultravan around the state to drum up attention and interest in their products.

“The thing with cans is, there is a stigma in the wine industry,” Fisk said. “We’re proving that the can protects from UV rays and oxygen: it’s a better seal.”

Cans are also better for the environment because they recycle more easily, especially after a picnic date at the park. Many places refuse to recycle wine bottles at all. Plus, shoppers dramatically reduce their carbon footprint by buying wine from local growers rather than from wineries around the world. 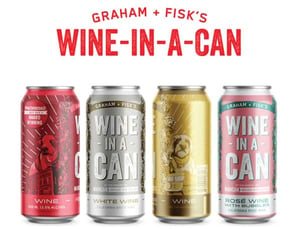 MANCAN Wine offers a variety of different blends and styles, including its popular Wine-In-A-Can product.

All of that is meaningless if the product doesn’t taste good. Today, the MANCAN Wine brand features four different wine varieties. Customers can purchase a red wine blend, white, a bubbly rosé, and white with bubbles. Fisk said the carbonation makes the white and rosé bubbly wines popular with wine drinkers who prefer both dry and sweet versions.

“In the U.S., the individual palettes vary with different regions. The Midwest, for example, has a sweeter palette. We found our blends span across all those,” he said. “Our red is fruity even though it’s a dry wine. It has a low tannin structure, so you don’t have to pair it with food. You can grab it and go.”

Fisk and Graham said that at tastings, one person would come up and say that they thought the red was the best, followed by someone else preferring their rosé. The diversity of opinion has to do with the different acidity and sweetness levels designed to appeal to everyone.

MANCAN Wine: Great for Couples Who Want to Enjoy Something Different

In an industry steeped in tradition, some may find it surprising that canned wine is currently the fastest-growing wine category. That means the demographics are expanding for products like MANCAN Wine.

“Early on, it was the millennial soccer dad crowd,” Fisk said of the product’s demographics. “Our customers now range from that initial demographic to across the board.”

MANCAN Wine allows daters to pack wine in a cooler and enjoy it anywhere.

Fisk said the canned wines are great on a date because they’re easy to pack, and you don’t have to open a fresh bottle if one person wants white and the other wants red. Plus, there are no glasses to wash.

“We have tons of testimonials. We watch what people are saying because it’s so important to have a conversation with the people who are buying our wine,” he said. “We want to make sure it’s the best possible experience that we can provide. We’re always here to listen to feedback and meet everyone’s expectations.”

Fisk added that he and Graham are proud of how their company has grown from just an idea on a barstool to sales across the nation.

“There’s nothing better than going to a place, a baseball game, and being in line, watching someone order your product,” Fisk said. “I like to introduce myself and thank them. We’re so grateful to everyone who loves our product. It’s a small business. When you create something, you never know. To see it happen, it’s so rewarding.”