FANDOM Unites People Through the Power of Fictional Stories & Relationships

The Scoop: FANDOM is home to over 250,000 fan communities that delve into fictional storylines, characters, and relationships. The website covers news in the entertainment industry and fosters fan-driven discussions and friendships in its niche wikis. The shipping wiki has a particularly passionate vibe because it promotes fantasy relationships and provides space for fan fics, fan art, slash ships, and meeting like-minded people in the fan community.

Shipping is a slang term that comes from the word relationship. If you want two fictional characters to get together, you are “relationshipping” them. For example, when I was reading the Harry Potter series, I was shipping hard for the two smartest Gryffindors — Hermione Granger and Neville Longbottom — because I wanted them to realize their nerdy love for one another. Alas, Nevmione was only meant to be in my imagination.

FANDOM has created a fun space where shipping ideas can be shared, discussed, and appreciated by the fans. The platform supports a shipping community with nearly 4,000 pages dedicated to fan-favorite romances, including Harry Potter ships.

FANDOM is the world’s largest fan platform. Its content creators love to nerd out about beloved fictional characters and stories. The website has a global audience of over 300 million unique monthly users, and it represents more than 250,000 communities dedicated to the imagined worlds of entertainment and gaming.

FANDOM launched a shipping wikia in 2013 to showcase fantasy relationships.

Since its launch in 2013, the FANDOM shipping community has grown steadily in large part due to the enthusiasm and input of active fans. The forum saw a 12% increase in users and 20% increase in pageviews in the spring of 2021.

The shipping community is a great place for people to explore their feelings and fantasies among friends. All types of shippers are welcome to read and post in the community. A lot of fans ship romantic connections that never happened in the original books, movies, TV shows, or video games. These are called non-canon relationships because they’re not sanctioned by the original creator(s). But that doesn’t stop fans from talking about them and imagining their own what-if plotlines.

From anime ships to Zootopia ships, FANDOM covers a lot of ground to entertain and unite people who share common interests and passions. The forum can spark lively conversations and forge meaningful relationships by harnessing the power of a good love story.

The first use of the word shipping has been traced back to the X-Files fandom. Many fans shipped the main characters of the science fiction show. Fox Mulder and Dana Scully did form a romantic relationship toward the end of the series, so this is a canonical ship.

Across the FANDOM platform, specific pages are dedicated to fiction’s most iconic relationships. For example, the Friends community has provided a detailed history about Ross and Rachel’s rollercoaster relationship. And yes, it covers the “on a break” controversy. The Ross and Rachel page also offers theories about whether the couple stayed together or got remarried after the show ended.

FANDOM respects the integrity of beloved stories and characters, and its pages offer a good combination of astute analysis, character quotes, fan art, and fun trivia. The community pages can answer questions about a character’s background, family conflicts, and relationships, so it’s a great resource for fans who want to discuss the nuances of an imagined world. 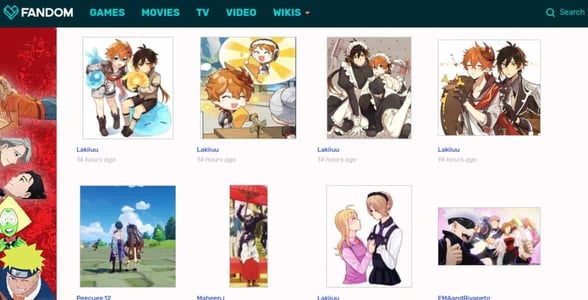 Fans come together on the shipping wikia to create content, tell stories, and explore their emotions.

The pairings are called OTPs (one true pairings) for short, and the couple will usually have a cute nickname that combines their names — as in “Bennifer” for Ben Affleck and Jennifer Lopez.

EreMika is one of the most popular and widely discussed OTPs in the shipping wikia. The page describes the complicated relationship between Eren and Mikasa in a Japanese manga series called “Attack on Titan.”

“Animation is popular in shipping,” the FANDOM team explained. “Anime has strong themes of romance. In this genre, fans have several outlets where they can express the ships, like fan art and cosplay, that make them more real.”

FANDOM’s shipping community has attracted many anime fans. All of its top-10 pages are either anime pairings or category pages for specific anime franchises. “Attack on Titan” and “My Hero Academia” have highly detailed sections that include heterosexual ships (Het), gay ships (Slash), lesbian ships (Femslash), and other pairings.

As a whole, the shipping community has grown to 550,000 monthly users averaging about 2 million pageviews a month.

FANDOM has shipping pages that run the gamut from silly flirts to passionate lovers. It includes fictional romances that get fans talking and even stir up some controversy for not being strictly part of the series canon. Sometimes a beloved character would have to come out of the closet for a particular ship to work, but that type of forbidden love can be exciting for fans. The slash ships category page sees over 30,000 monthly views alone.

It’s pretty common to see LGBTQ+ fans gushing over slash ships between canonically straight characters. The slash ship between Draco Malfoy and Harry Potter (Drarry) is the most iconic example. Readers put these two schoolboy enemies together because they had strong feelings about one another, and there’s a fine line between love and hate. 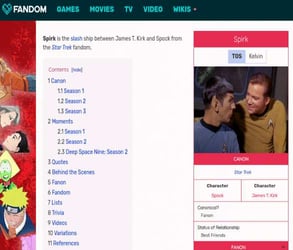 The Smirk page describes the close relationship between Spock and Captain Kirk in “Star Trek: The Original Series.”

“Slash ships are very common, likely because we still don’t see enough same-sex relationships in movies and television so fans create their own,” the FANDOM team explained. “It’s human nature to look for depictions of our own romantic ideals.”

Fans can get a lot of pleasure and inspiration from reimagining straight characters from a queer or poly lens. The FANDOM pages create a nonjudgmental space for exploring the chemistry between the Doctor and the Master or imagining a Star Trek series where Spock fell in love with Captain Kirk. Talk about where no man has gone before!

The top gaming ships come from Genshin Impact, an action role-playing game (RPG) that immerses players in a magical world. One commenter said their sole purpose in downloading the game was for shipping. “It’s fun. So much fun,” the fan said. “I even skipped homework yesterday for this.”

Sometimes ships can involve real people. The YouTube community has sparked many fun pairings between acclaimed influencers and creators. For instance, George Davidson of GeorgeNotFound has been connected in a poly ship with fellow YouTubers Dream and Sapnap. They’re known collectively as the Dream Team.

“They are all good friends and make frequent collaborations together on Twitch and YouTube,” the page notes. “There are many fans who ship the Dream Team as a poly ship rather than a friendship.”

Whether it’s Black Widow and the Winter Soldier from the MCU or Adrien Agreste and Marinette Dupain-Cheng from “Miraculous Ladybug,” the ships pages explore relationships that may not have appeared on the screen or the page, but they came alive in some people’s hearts and minds.

Friendships and relationships naturally form when people share similar perspectives and interests. That’s why fan communities have become hot spots in the modern dating scene. Two people can get to know each other by discussing their favorite characters, and they may discover their shipping interests are naturally aligned.

The FANDOM shipping community gives people a chance to talk about their romantic fantasies and relationship goals in a safe and friendly environment. The forum is all about love, both real and fiction, so fans should feel free to follow their hearts and embrace their inner nerds.

FANDOM offers a world of entertainment and fellowship for movie buffs, gamers, bookworms, binge-watchers, cosplayers, and a host of other types of fans. Whether you’re a fan of a cult classic, a manga comic, or a billion-dollar franchise, you can connect with like-minded people through the FANDOM communities.