The Scoop: DNA Romance has pioneered a genetic matchmaking system that takes some of the guesswork and randomness out of online dating. Launched in 2017, this smart dating app provides users with a swab kit, so it can analyze their DNA for markers related to romantic compatibility. Thanks to DNA Romance, singles can find new dating insights written in their genetic code and make scientifically sound decisions when choosing their next partner on the app.

Netflix has come up with all sorts of attention-grabbing and thought-provoking series over the last few years, and one of its newest original series has an intriguing premise. “The One” focuses on a DNA company that claims it can find a person’s soulmate by analyzing a strand of hair and identifying the genetic markers of love. “The One” premiered on Netflix March 12.

“‘The One’ is set five minutes in the future, in a world where a DNA test can find your perfect partner,” the show’s description reads. “The idea is simple, but the implications are explosive. We will never think of love and relationships in the same way again.”

At first glance, this mind-bending thriller seems like pure science fiction, but the founders of DNA Romance tell us it’s closer to science fact than the average person may think.

DNA Romance is a groundbreaking dating app that uses genetic markers as one of the data points in its match algorithm. The app offers a DNA Collection Kit, so singles can take a cheek swab, send it to the lab, and start receiving genetically compatible matches in the app.

The team also accepts autosomal DNA data from third-party testing companies, including 23andMe, Ancestry DNA, Family Tree DNA, We Gene, My Heritage, Dante Labs, Genes For Good, Vitagene, and Living DNA. If a new user connects their DNA Romance profile to one of these accounts, their DNA data can be downloaded and saved immediately, which means their genetic matches will appear within less than two minutes.

“This is the way to find ‘The One’ in 2021,” a Seattle single named Jessica said. “DNA Romance matches DNA using an opposites attract approach. I love applied science!”

Taking a Scientific Approach to Matchmaking

DNA Romance has distinguished itself from other online dating apps by investigating romantic chemistry on a genetic level. The app uses DNA analysis to decode the secrets of love and make a scientifically sound prediction about which two people will hit things off 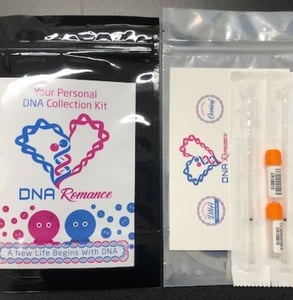 “We are the first platform to match people based on all three elements of human attraction: appearance, personality, and chemistry,” the DNA Romance team said. “We are pioneers in understanding how DNA plays a role in human attraction and relationships.”

The app is the passion project of married couple Dr. Timothy Sexton and Judith Bosire. Timothy has a PhD in population genetics, and Judith has a master’s degree in financial economics and international studies. The couple actually met on a dating app and found they shared an interest in the science behind love.

In 2014, the couple incorporated the company DNA Romance to raise the profile of genetic testing in the online dating industry.

The DNA Romance app launched in 2017, and it is currently available in 94 countries, including the U.S., the U.K., Canada, France Brazil, and Australia.

Many singles have been intrigued by the idea that a cheek swab can unlock a proven path toward love, and the app has earned praise for its innovative approach to online dating. The GeekWire blog featured DNA Romance in its Startup Spotlight, and Griffith University’s tech podcast interviewed Dr. Timothy Sexton for his insights on the potential of genetic matchmaking.

“We have selected candidate genes that have been shown to play a role in the formation of relationships, and we have weighed our analysis towards loci that have been confirmed by several independent studies,” the DNA Romance founders explained.

How the Genes of Love Can Inform Swiping Choices

Some scientific studies have investigated romance from a genetic perspective and found chemistry is more than skin deep. As it turns out, humans have a sense for finding partners who are genetically compatible and can improve the genetic makeup of their offspring. That sense is the olfactory system aka the sense of smell.

“Our sense of smell is wired to our brain and detects potential relationship partners who are resistant to different diseases,” Dr. Timothy Sexton explained. “This is important because when one person is sick, then the other might be healthy. In addition, children will inherit a more diverse set of genes from their parents.”

An old saying tells us that “opposites attract,” and genetic research has borne that out by showing that potential partners with different immune system genes are consistently seen as more attractive. These genes of love are not exclusive to humans either. Fish, birds, and primates also have displayed major histocompatibility complex (MHC) dependent on mate selection. 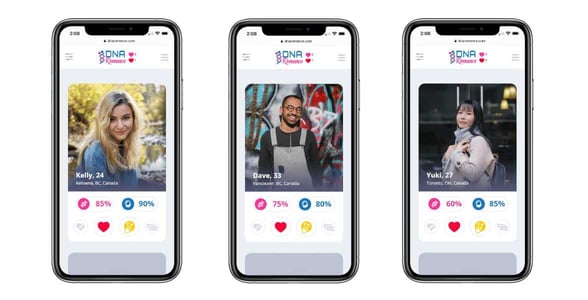 Finding a compatible partner is much easier when singles have the right tools and information.

The DNA Romance app has harnessed the power of this genetic phenomenon and applied it as a predictive tool. That way, singles can make an informed decision and discover a romantic chemistry that is backed by science.

Of course, chemistry isn’t the only factor in a successful relationship, so DNA Romance has also incorporated more traditional online dating features, including personality testing and photos, to make sure online daters have all the data they need to pick up a compatible date.

“Our DNA romance score reflects your potential for chemical attraction with another person,” according to the app. “Like any online dating site, DNA Romance provides a short-list of matches whom you can communicate with and see if there is a meaningful connection.”

Some people may feel hesitant to share their personal information, let alone their genetic information, with an online dating app. But DNA Romance takes privacy concerns seriously and endeavors to put user’s minds at ease by implementing secure methods of data collection and storage.

DNA Romance users have complete control over their personal data. The app does not sell DNA data to any other companies. The user’s DNA data file is encrypted and stored in a secure location with a two-factor authentication system to restrict outside access. 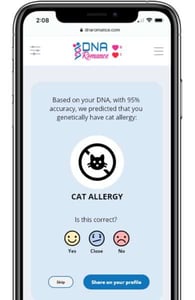 “We respect your right to be forgotten,” the DNA Romance team said. “You can delete your profile and raw DNA file in the settings section of your DNA Romance account dashboard.”

Job one of selling DNA Romance is making single people feel comfortable with genetic testing as part of online dating.

The DNA Romance team has been proactive about educating the public about the science behind DNA matchmaking. Through podcasts and interviews, the team promotes DNA Romance’s genetic testing formula as a solution to online dating frustrations.

If you become a fan of DNA Romance, you can even make some easy money by helping to spread the word. The app has a Refer a Friend program that pays cash for every person who makes a purchase on DNA Romance using a unique referral link. Affiliate partners also receive commissions based on the online activity of the people they send to the app.

Thanks to “The One,” Netflix has tantalized audiences with the idea that a person’s genes can identify a one true love. As crazy as it sounds, this idea isn’t all fiction. DNA Romance has unlocked the secrets of genetic compatibility and made scientifically backed DNA matches available to the online dating world.

As the first dating app with genetic matching, DNA Romance is pioneering new techniques to inform and improve relationships. Since its launch in 2017, the app has assisted tens of thousands of users around the world, and it has been growing more robust and precise with every update.

“Our mission is to enrich people’s lives by helping them make genuine connections that lead to lasting love,” the DNA Romance team said. “We aim to improve the accuracy of our romantic predictions with each new member.”

321Chat is a Safe Space to Meet Like-Minded Singles