The Scoop: Christine Baumgartner became a dating and relationship expert out of a desire to change her own dating destiny and find a man who would be worthy of her love. She runs a dating coaching firm called The Perfect Catch to share her insights and experiences with singles facing personal relationship problems. Christine understands that a little soul-searching can go a long way in the dating scene, and she encourages singles to ask themselves what they really want in a partner and how far they’re willing to go to get it.

When, at the tender age of 18, Christine Baumgartner married her high school sweetheart, she thought she had love all figured out. She’d followed her heart, but she realized she had rushed into a committed relationship with someone who wasn’t a good match for her emotionally, mentally, and spiritually. Christine and her first husband were unhappily married for 13 years before they decided to call it quits.

After that painful experience, Christine embraced being single. The professional event planner spent the next 20 years dating all kinds of men. She met handsome men in person and online, and she pursued relationships that would never lead to marriage. They were all good guys, but they were all wrong for her.

“I never had a really bad date,” she told us. “Everyone I dated during that time was nice, but I wouldn’t marry them.”

At last, Christine had to take a hard look at her dating habits and figure out why she was attracted to incompatible partners and which traits she should be looking for. She went to therapy, adjusted her expectations, and began seeking men who met her standards. 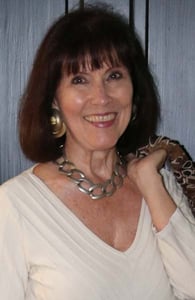 Dating coach Christine Baumgartner learned a lot about herself by dating for over 20 years.

Christine didn’t just have a checklist of superficial traits — she had a spreadsheet of date attributes (i.e. being financially stable) that she valued above all others. She outlined her personal dealbreakers and dealmakers to help her recognize the man of her dreams. So, when Tony gave her diamond earrings and his credit report after three months of dating, she knew he was the one for her. They were together seven years until his untimely death a few years ago.

By identifying her relationship priorities, Christine empowered herself to make smart decisions in the dating world, and she increased the quality of guys on her date card at the same time. Now Christine offers clients her insights as a professional dating coach who has been through the ringer and knows how to avoid common mistakes. The Perfect Catch has given hope to many singles over the last 10 years and provided a concrete strategy for building relationships that last.

“My being single had nothing to do with the guys I was dating and everything to do with me,” she said. “That’s the good news. If it is you, at least you have control over it and can make a change.”

Christine offers a complimentary introductory coaching session for anyone thinking about becoming a full-fledged client. She uses these 60-minute phone conversations to get to know someone and see if her coaching style is the right fit. She said even those who don’t sign up for a coaching program or class still learn something new about themselves or the dating world after talking with her.

“My goal is to always have people leave having learned something,” Christine said. “I want them to learn more about themselves, the dating world, and how to be successful in it.”

When she sits down with a new client, Christine said her first priority is to listen to them talk about themselves, their experiences, and their hopes for the future. She wants to understand who they are, so she knows how to help them reach their dating potential.

“Everyone has their own story,” she said. “My clients tell me they feel seen and heard during our discussions, and that’s really important to me. That’s my biggest strength as a dating coach.” 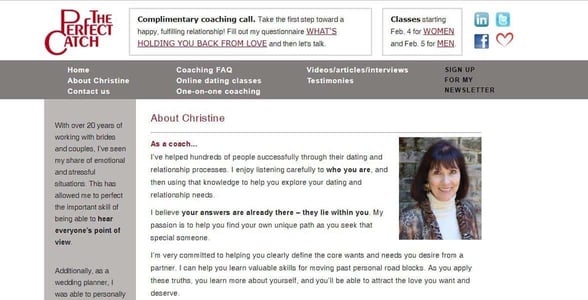 Christine has a way of knowing what her clients need to hear and delivering the truth in a way that resonates with them. Her one-on-one sessions can cover a lot of ground and lead singles to eye-opening conclusions about what they want and need from a relationship.

Whether she’s giving tips on what questions to ask on a first date or pinpointing areas of miscommunication in a relationship, Christine offers practical guidance and deep insights for anyone struggling to find their heart’s desire in the dating scene.

“After years of writing, crying, and going to therapy, I came up with this process of meeting the right dates,” Christine said. “My credentials as a dating coach is that I’ve been where my clients are, and I am where they want to be.”

In addition to one-on-one coaching, Christine hosts six-week teleclasses. She teaches single women on Mondays and single men on Tuesdays. Christine divides her classes by gender because she recognizes that men and women approach dating differently. She explains those differences and translates what the other side is thinking and feeling.

John Gray, who wrote “Men Are From Mars, Women Are From Venus,” was one of Christine’s early mentors in the dating industry, and she has modeled her classes to bridge the divide between the genders. 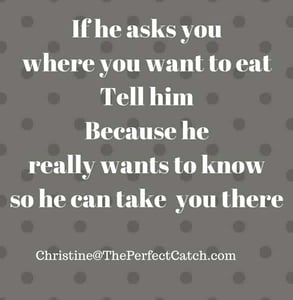 Christine encourages daters to stop playing mind games and communicate clearly with one another.

The Transform Your Dating Life curriculum challenges men and women to look at dating from a different perspective and develop strategies to improve their relationships. Christine told us clear communication between genders is the first step toward a healthy relationship. She encourages her clients to express their needs openly to their partners, so they can establish reasonable boundaries and expectations.

Christine used her own relationship with Tony as an example of how honest communication can help couples avoid conflict. Tony often pranked his children, his friends, and the people in his life, and Christine told him that she thought practical jokes were hurtful and did not want to be involved in one. And she wasn’t. Tony respected her wishes and never pranked her at any time in their relationship.

“Men will go so far out of their way — to the ends of the earth — to make the woman they love happy,” Christine said. “But they’re waiting for us to tell them what would make us happy.”

Clients Learn to Look at Love From a New Perspective

Christine has been in the dating industry for a long time, and she has received wonderful feedback from her former clients. Her testimonials page is overflowing with positive comments from men and women of all ages and dating histories.

“Christine has an amazing insight into what makes men and women tick, and relationships work,” said Laurie. “She worked with me on my level, and intuitively understood where I was in my relationship.” 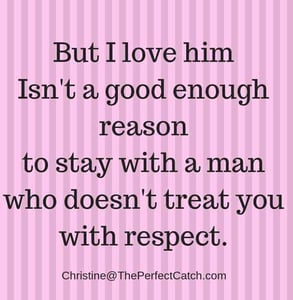 After years of navigating the dating scene, Christine has developed her emotional intuition and learned to listen to her gut during individual coaching sessions. She told us her coaching instincts tell her what questions to ask or where to direct the conversation.

Cija Black said Christine had a knack for saying what needed to be said to foster personal growth and a deeper understanding of relationships. “Christine is absolutely amazing,” Cija said. “It’s clear she has a passion for coaching and knows how to listen and highlight those things we might miss on our own.”

Christine acts as a sounding board, a cheerleader, and a mentor for her clients. Her goal is to help them identify roadblocks on the way to love and push through them with greater self-awareness and self-confidence. When she hears her clients say, “I’ve never thought about it that way,” Christine knows she has done her job.

“I can teach my clients techniques on the spot to use with a significant other and make life happier,” she said. “I make a difference in my clients’ lives, and they spread that happiness to people in their lives, and that’s a great feeling.”

Christine has experienced the highest highs and the lowest lows in the dating world, and she can empathize with singles struggling in the search for love. She knows what it’s like to be stuck in a bad relationship, to pick the wrong partners, and, finally, to enjoy dating and successfully find love.

Ever since she was a teenager, Christine has had to learn the hard way that the person you want to date isn’t always the person you should marry. She had to go through those experiences to recognize her mistakes and make better decisions in the future. Now she seeks to help her clients figure things out a lot more quickly and get on a healthier, happier path.

This knowledgeable dating coach offers a shortcut to fruitful and satisfying relationships. The Perfect Catch is on a mission to ensure that singles everywhere have the skills and insight they need to choose the right person for them.

“We think we should just know how to date. Well, we don’t,” Christine said. “You need to learn how to date in a way that’s healthy, and you don’t have to learn the hard way.”