The Scoop: Getting Married in Denmark (GMID) is a consulting agency that specializes in helping international couples get their paperwork in order for their wedding day. The documentation experts offer free resources and paid services to make planning a wedding in Denmark much easier for couples living, working, or studying abroad. The bureaucratic process can appear intimidating from the outside, but the insiders at Getting Married in Denmark can answer your questions and prepare your application so everything goes smoothly on the big day.

While studying in Scotland, Rasmus and Zoo met and fell head over heels in love. They got engaged on New Year’s Day after dating for three months and began planning a wedding for the following winter.

Rasmus is Danish, and Zoo is British. But they met in Scotland, so they had a lot of options for where to get married. They chose Copenhagen, Denmark’s capital, because that’s where they wanted to build a life together. 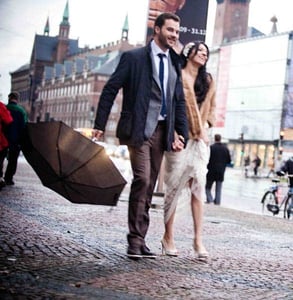 Zoo and Rasmus turned their international love affair into an inspirational business plan.

Zoo blogged about her experiences planning a wedding as an international bride, and she shared the challenges and joys of the process. Her readers began to ask for help with planning their own wedding days, so Zoo and Rasmus started consulting on the logistics of Danish weddings.

As Rasmus and Zoo worked with couples, they saw that international couples needed particular help navigating the bureaucracy in Denmark. The couple realized they could do a lot to help couples overcome borders and other obstacles in their journey down the aisle, so they launched Getting Married in Denmark (GMID) in 2014.

“We felt we could make a difference, especially after the trouble and anxiety we had gone through when we applied for marriage here at the town hall in Denmark,” Zoo said. “Our own experience was the inspiration behind it all.”

Today, Rasmus and Zoo are happily married and offer guidance that’s instrumental to couples from all over the world. Getting Married in Denmark has become their love letter to same-sex and opposite-sex couples who, for whatever reason, want to say their vows in Denmark.

In 1989, Denmark became the first country in the world to recognize same-sex unions through registered partnerships. This was a crucial first step toward legitimizing same-sex relationships, and the government officially legalized same-sex marriage in 2012.

As one of 28 countries were same-sex marriage is legal, Denmark has become an understandably popular wedding destination for LGBTQ+ couples from all over the world. However, it’s not always easy for couples to plan a wedding on foreign soil — particularly if they’re unfamiliar with the nuances of the law.

Getting Married in Denmark is a go-to resource for international couples.

That’s where the team at Getting Married in Denmark steps in. Rasmus and Zoo have personal experience planning a wedding in Denmark, and they know how challenging the bureaucratic process can be for international brides or grooms.

Zoo said collecting the documents needed for her wedding was daunting at first because she didn’t have a birth certificate, and that was one of the requirements. However, she kept planning and eventually found a solution with the town hall in Frederiksberg.

Getting Married in Denmark offers step-by-step planning services for couples planning to get married and who wonder what documentation is required. Its free resources include a list of required preliminary documents and answers to common questions like “How long do we have to stay in Denmark?” and “How does the application process work?”

For a low one-time fee, the team can provide more hands-on assistance, including acting as a middleman between couples and the Danish government. The team facilitates weddings by assisting with the paperwork and document gathering, and they refer couples to professional wedding planners for help with the day-of details.

“We love it this way because we can just totally concentrate on what we feel is the most important step — which is making the wedding possible,” Zoo said. “Most of our couples just want it super simple and low-key.”

Getting Married in Denmark’s client base ranges in age from 18 to 85, and they come from all walks of life. Some are planning to move to Denmark for the long haul, while others live in Europe or the U.S. but find it easier to get married in Denmark for legal reasons. Zoo said some couples marry in Denmark to avoid persecution back home because of who they are or who they love.

Whatever the reason, GMID is there to help the application process run smoothly, so couples can start their lives together without unnecessary hassles or delays.

Trying to apply for a marriage license in Denmark can be time-consuming and complicated if you don’t know what you’re doing. The Agency of Family Law’s primary objective is to see the law upheld, and the office doesn’t have the resources or manpower to hold the hand of every couple thinking of submitting an application.

The government may not have amazing customer service, but an agency like Getting Married in Denmark can fill that gap and provide personal support to navigate the bureaucratic process.

Getting Married in Denmark is a family-run business with eight team members who truly care about their customers. Half the team are close friends of Rasmus and Zoo, and the Co-Founders make an effort to make everyone feel like part of a big extended family.

“We feel this is healthy for the team and that our customers benefit from this positive atmosphere,” Zoo told us. “There’s always something new to learn from each other, and everyone has some talent to bring to the table.” 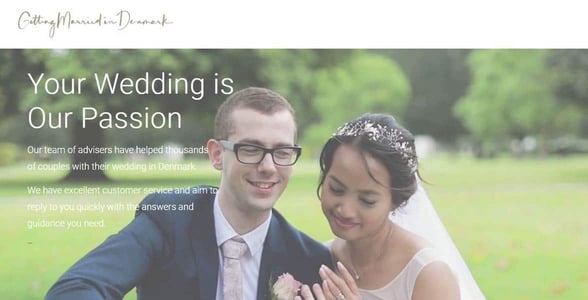 Getting Married in Denmark employs a responsive team of documentation experts.

From start to finish, the Getting Married in Denmark team can take the headaches out of applying for a marriage license and give international couples the tools to succeed.

These consultants act as a friendly bridge between couples and the Agency of Family Law. After learning about a particular couple’s circumstances and nationality, they can offer advice and tell them what the government will need to issue a marriage license. They can even arrange and organize the documentation before sending it through the proper channels.

The GMID team takes heart from every thank-you note or wedding picture they receive from couples who used the service to make the wedding day of their dreams possible.

The Site Has Helped Over 3,500 Couples Tie the Knot

Getting Married in Denmark has come a long way in the last few years, and it’s become an authoritative resource on the documents, applications, and bureaucratic processes involved in being wed in Denmark. Many international couples have relied on this guidance to make their special days a reality.

In fact, the team estimates that they’ve helped between 3,500 and 4,000 couples get married in Denmark. Each story is meaningful to Zoo, but she told us a few customers stand out because of their remarkable journey to marriage.

In 2015, a same-sex couple from Australia, which hadn’t yet legalized same-sex marriage, traveled to Denmark to hold a small wedding during their Christmas holiday. Zoo and Rasmus invited the couple over for Christmas dinner where they toasted their good health and happiness. Zoo said she still keeps in touch with the couple and considers them good friends.

“I was able to experience their happiness in December 2017 when same-sex marriage became legal,” Zoo said. “This couple’s marriage became accepted in their home country, and their union acknowledged. When enough people stand up for what they believe in, then their governments start to listen, and I think we help some people to do this.” 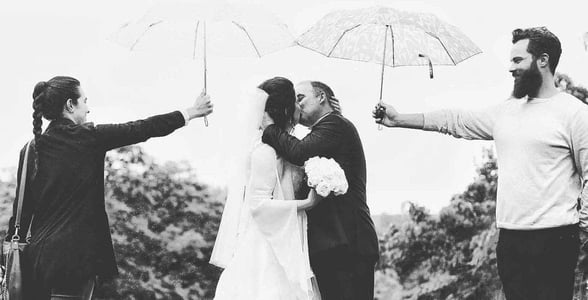 GMID works closely with couples and Denmark’s town halls to make the big day a success. Photo by Elena Belevantseva.

One couple reached out to Getting Married in Denmark because they were encountering racism trying to get married in their country of residence, and they hoped Denmark would be different. The experience was like night and day. The bride said she felt welcomed by Denmark’s town hall, and she felt overwhelmed by the love shown by everyone.

Zoo said it still brings tears to her eyes to think about what that couple had to go through just to get married. “I was so happy to have been able to offer that experience,” she said, “but the fact that that sort of racism still goes on so close to home just makes me feel like there’s so much work still to do”

Every union facilitated by Getting Married in Denmark is important as it leads to new families, new experiences, and new life, but sometimes a marriage can have an even larger impact. Some married couples can put political pressure on governments, lawmakers, and voters to rid the law of prejudice and move society forward.

“We like knowing we’re bringing people and families together, no matter the border or the obstacles,” Zoo said. “It makes us feel useful and like we’re doing something meaningful.”

When a Danish man and a British woman meet and fall in love in Scotland, where do they get married? Denmark, of course! After graduating from university, Rasmus and Zoo started a marriage and a business in Copenhagen, and they have brought love and happiness to thousands of couples as a result.

With supportive resources and services, the Getting Married in Denmark team champion love in all its forms. The Danish agency offers wedding consultations and checklists that make it possible for couples from all over the world to celebrate their relationship and build a life together that starts with vows in Denmark.

Zoo said her fondest wish for the future is to see all couples, no matter their sex, skin color, or cultural background, acknowledged and accepted in all corners of the globe.

“Rasmus and I once talked about what we’d do because if that all happens, we’ll no longer have a company as people won’t need to come to Denmark to marry,” Zoo said. “And we concluded that when that happens, it’s going to be such a happy time that we’ll be too happy for everyone to get upset about it.”