FollowUpThen: How Dating Professionals Can Set Email Reminders to Keep in Touch With Clients & Coworkers

The Scoop: Ever lose track of a business contact in your inbox? Forget to send a follow-up email to a client? Let deadlines slip by your remote team? Then you could use the organizational power of FollowUpThen, an email tool that can help dating professionals stay on top of their contact lists and clear out their inboxes. You can easily schedule email reminders for yourself or a group by using this intuitive system.

You can tell a lot about a person by how they manage their email inboxes. Some people are meticulous about keeping the number of unread emails in their inboxes close to zero, while others are decidedly less diligent about it and end up with thousands of messages cluttering their inboxes.

According to a 2012 study, 70% of work emails are attended to within six seconds of receipt. But that doesn’t mean those emails disappear entirely — some stick around like virtual ghosts haunting the recipient with the need to follow up.

Dating professionals can receive hundreds of emails from clients, colleagues, journalists, and others in the industry, and it can be difficult to filter, organize, and keep up with all these requests. Some contacts are bound to get lost in the shuffle in such a crowded inbox, and that can be bad for business.

It works like this: Say you’re onboarding a new client in your coaching program, and you want to reach out via email and then send a follow-up message one week later. You can send your welcome email and schedule a follow-up email simultaneously by writing 1week@followupthen.com in the  bcc field.

FollowUpThen will send you a reminder based on the time frame given in the email address. The time period can range from 10 minutes to 10 months to anything. You can set specific dates (as in December20.2020@followupthen.com), or you can arrange regular reminders for a specific day of the week (as in EveryMonday11AM@followupthen.com). FollowUpThen will automatically send you your original email as a reminder at the appointed day and hour.

FollowUpThen is an effortless and efficient way for business professionals to keep up with their contacts. If you write Tomorrow4PM@followupthen.com in the blind carbon copy (Bcc) line of the email, you will be the only one who can see the forwarded email in your inbox when it arrives the next day. Or you can add it to the Cc line to loop your coworkers in the chain.

“Building a relationship with someone has a lot to do with the frequency of your interactions over time,” Reilly said.  “FollowUpThen can help you connect with someone at the exact right intervals so you can make the most out of that relationship.”

Build Working Relationships One Email at a Time

FollowUpThen can help you schedule regular email reminders to follow up with a matchmaking client, a business partner, a coworker, or even a significant other. You can use it to remind yourself of important deadlines and dates — some have even used it to remember anniversaries.

While the functionality is versatile enough to help anyone, Reilly estimated that about 80% of FollowUpThen email reminders are sent for business reasons. It’s an efficient way to up one’s networking game and make sure no potentially lucrative opportunities slip through the cracks of an email inbox.

“It’s right for a certain type of person,” Reilly said. “I’d describe them as self-proclaimed productivity geeks. These people love to find new ways to get more done in less time.”

FollowUpThen users typically spend a majority of their work days in their email inboxes reading and responding to messages. These networking professionals are interested in a tool that helps them shave off 30 seconds of time on a task they do 50+ times a day. Some have been using FollowUpThen for nearly a decade.

FollowUpThen prompts professionals to send the right email at the right time.

The simple FollowUpThen system empowers business professionals to schedule a follow-up email while staying in their emails, and it works seamlessly and intuitively. You can even save valuable keystrokes by using the short domain @fut.io instead of @followupthen.com.

Looking to the future, Reilly and his team are developing a new MailBots platform to help developers add their own productivity tools to their email inboxes.

“We are building a platform that lets developers build applications like FollowUpThen that allow people to get things done without leaving their inboxes,” Reilly said. “It will be more of a developer platform.”

Inbox Triage: The Art of Managing Your To-Do List

As a dating professional, you only have so much attention to go around, so it’s vital to put your resources where they’re needed the most. You should handle important tasks immediately while leaving semi-important tasks for later by setting reminders through FollowUpThen.

Reilly recommends going through what he calls inbox triage to get your messages down to zero (or at least a more manageable number than 1,000+). You can start at the bottom or top of your emails and deal with the ones that are important while forwarding the ones that can wait to FollowUpThen.

Professionals can use FollowUpThen to set easy reminders to deal with a particular issue later. Say a media outlet contacted you about an interview on Monday. You can set a reminder by putting NextMonday@followupthen.com in the Bcc line, and then delete the email from your inbox.

“Amazing reminder application. The genius is in its simplicity.” –FollowUpThen user @JPCromwell

When the interview date arrives on Monday, FollowUpThen will send a reminder email with the thread for you to read. Thanks to this system, you can clear out the email until the moment you need it. That allows professionals to move on and address other more pressing obligations.

“When you go to your inbox and see piles of things from the previous day, that can interrupt your workflow,” Reilly said. “You should try to clear out as much as you can and distill your emails to a short to-do list of action items.”

Reilly also advised professionals to cut the fluff out when writing emails in the business world. He said the ideal email should be informative and brief. It should say what must be said with no words wasted. That means skip the pleasantries and get right down to business.

“It’s a unique skill to write something with a lot of meaning and data but few words,” Reilly said. “Maintaining a culture of brief emails can save a lot of time.”

A Startup Geared Toward Productivity & Innovation

Reilly Sweetland founded FollowUpThen with a friend as a side project to their development work. They wanted to create an email to-do list that would help them stay on task. On a Saturday night in 2010, the two developers dreamed up a simple email tool that would automatically remind them when they needed to send follow-up emails to one another.

Over time, Reilly realized the email tool, which they called FollowUpThen, was the coolest thing they were working on, and he decided to put all his energy into making it available to everyone. He contacted LifeHacker about his innovative tool, and the blog wrote a feature about FollowUpThen’s utility as a productivity hack.

“It surprised us just how FollowUpThen resonated with so many people,” Reilly said. “It’s great for professionals who need to set periodic reminders for regular tasks.” 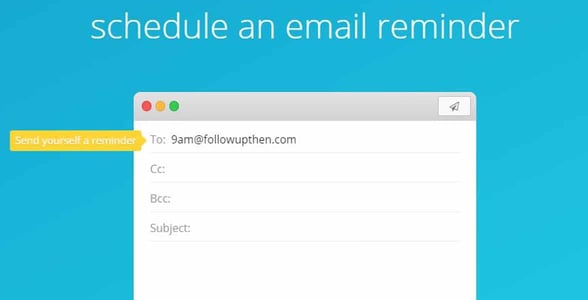 Reilly said he has enjoyed hearing from users who found the tool valuable in their personal or professional lives. Some people told him they felt less stressed when looking at their emails, while others said the tool enabled them to expand their business reach. One man even said FollowUpThen helped him save his marriage.

Over the years, FollowUpThen has grown by word-of-mouth, and Reilly has now bought out his co-founder and raised a round of fundraising to take FollowUpthen to the next level.

Reilly has tapped into the global workforce by hiring remote team members. He currently employs two highly motivated and intelligent developers who are passionate about FollowUpThen’s potential to grow.

“When I’m hiring, I look for people who can be effective while working independently,” Reilly told us. “It’s important to feel that you’re working with a real person, not a robot.”

Everyone has a different process for managing their inboxes. Some people tackle their incoming emails right away, while others let tasks accumulate and then get it all done in one big push. No matter what your workflow is, it helps to have a quick way to cut down on the clutter in your inbox. That’s where FollowUpThen comes in.

FollowUpThen can help dating professionals deal with an onslaught of emails by giving them tools to respond in a timely fashion. Whether they’re following up with a client after an arranged meeting or motivating a team to accomplish specific goals, it’s important for professionals to organize their emails so they work in tandem with their calendars. FollowUpThen can make that happen by sending email reminders when you need them the most.

“FollowUpThen allows people to put things in the future and be more in the present,” Reilly said. “With three seconds of work, you can have a followup with that person and build that relationship through email.”