Political polarization has impacted the modern dating scene in subtle yet pervasive ways. It’s not uncommon for today’s singles to see a date’s voting history as a dealbreaker, and some Trump administration staffers have admitted to downplaying their political opinions on dating apps to avoid rejection.

Couples who once agreed to disagree now argue over the facts (or the alternative facts), and those heated discussions can instigate breakups and divorces. This isn’t just an American phenomenon. In the U.K., eHarmony found that the Brexit vote has led to over 1.6 million failed relationships. 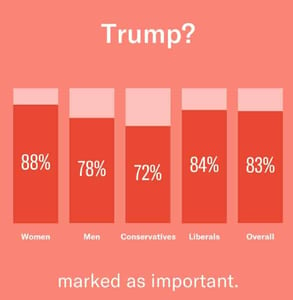 A majority of OkCupid members have rated Trump as an important dealbreaker in the dating scene.

OkCupid has tracked how political opinions have impacted daters in a post-Trump world. According to the dating site, 73% of millennial women and 56% of millennial men said they would prefer a romantic partner who agrees with them about politics. They’re serious about it, too. About 83% of OkCupid members said their date’s opinions about Donald Trump were important in terms of overall compatibility.

Couples build relationships based on shared values and mutual respect. However, the current political climate has disrupted that process by pitting the right versus the left, men versus women, old versus young, and on and on. In the face of such turmoil and conflict, the Media Bias/Fact Check website has arisen as a trustworthy news resource where people can come together in support of the truth.

As we approach 2020, it’s not yet clear who the candidates will be or which issues will drive people to the polls, but Media Bias/Fact Check will be there to separate the truth from the lies so couples can rise above the vitriolic debate and get the facts about what’s really going on.

“I certainly think that couples with differing political positions can get along just great as long as there is respect for each other’s positions,” Dave said. “However, I believe the current environment can certainly negatively impact couples.”

Media Bias/Fact Check began as a small personal blog, but it has expanded rapidly in the last few years. The site currently averages about 2 million pageviews per month with roughly 600,000 unique visitors. Approximately 85% of the site’s audience is in the U.S., and 60% is under 35 years old. The majority of its readership has at least a bachelor’s degree.

Curiosity leads people to this site, and many find its straightforward and truthful assessments a breath of fresh air. Media Bias/Fact Check has delivered reports on over 2,500 media sources. The site rates media on a partisan bias scale and identifies outlets reliant on pseudoscience or questionable sources. Its list of least-biased news sources gives a seal of approval to factually driven and credible media outlets around the world.

It’s safe to say that much of Media Bias/Fact Check’s success stems from the polarizing and opinionated nature of today’s politics. The 2016 presidential election (and the birth of fake news) made this fact-checking site a necessary resource for anyone looking to stay informed without being misled by partisan new sources. The site can help couples filter out the false claims and emotionally charged rhetoric that can be damaging to building consensus.

Dave’s credibility as a crusader for truth has earned him a following of millions of politically engaged individuals. He doesn’t claim to be without biases himself, but he does his level best to stick to the facts on his website and listen to the opinions of reasonable people who disagree with him. Anyone can help fact check media outlets for the site.

“Our team consists of volunteers from many different backgrounds and also political philosophies,” Dave told us. “None of us are immune to bias, so having a diverse group of people is important to provide balance.”

The Media Bias/Fact Check follows the code of principles set down by the International Fact-Checking Network (IFCN) at Poynter. This group is among the most credible fact-checkers in the world. 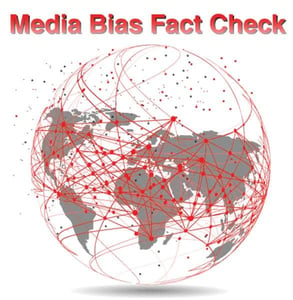 The Media Bias/Fact Check scale reveals where media outlets fall on the political spectrum from far right to far left.

Media Bias/Fact Check assesses media outlets and publishes bias ratings according to its high-integrity standards. Its fact-checking methodology is transparent and evidence-based, and the site builds trust with its audience by holding journalists accountable for being honest, accurate, and fair.

The site’s most popular sections are the ones listing biased media resources. The Left Bias List and the Right Bias List both include hundreds of local, national, and global media sources that appeal to people by delivering misleading reports that fit a certain worldview.

“Rating sources is a thorough and lengthy process,” Dave said. “It’s done through researching the history of the source as well as their funding or ownership, and then finally digging deep into the content to look for biased wording, misleading statements, or outright false information. We then take this information and numerically score it with an established methodology.”

MBFC readers can use the site’s dedicated media search to find reputable sources devoid of such biases. Media Bias/Fact Check also publishes and republishes fact-checking articles (courtesy of the IFCN) and news summaries from low-bias and highly factual sources. It’s no wonder the website claims the title as the most comprehensive media bias resource on the web. Its well-reasoned and fact-driven content can steer people away from misleading emotional arguments and toward truthful conversations about important social and political issues.

If a person buys into alternative facts and conspiracy theories, that can be a huge obstacle in a relationship. It can be difficult to find middle ground with someone who sees the world through a warped lens and calls anything outside that view “fake news.” Romantic partners have to commit to set aside their personal biases and be open to another way of thinking — yet such compromise is increasingly rare in this politically polarizing atmosphere. 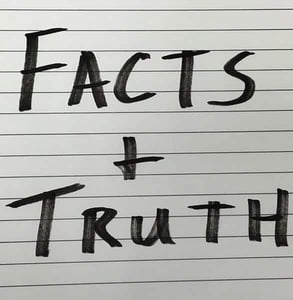 If you want the truth, you can trust Media Bias/Fact Check to point the way.

“Over the last few years, it seems that facts and evidence have become subjective for some,” Dave noted. “When a term like ‘alternative facts’ is coined, that indicates just how far we have moved away from reality.”

Since its launch, Media Bias/Fact Check has offered its readers a reality check. The website provides a balanced look at the headlines of the day, and its informational resources have been a positive influence on many people. Reading its fact-checked articles can help people open their minds and change how they view the world.

Dave told us the story about one conspiracy theorist who had believed false and misleading information prior to coming to Media Bias/Fact Check. Some disreputable news sources had colored his worldview, but he got back on track by following Media Bias/Fact Check’s recommendations. Thanks to these resources, he learned how to properly vet information and discover the truth.

“Some of our readers never realized they were consuming nothing but one-sided information before they came to us,” Dave said. “When we get these positive stories, it makes it all worthwhile.”

American politics can force people to take sides and become entrenched in all-or-nothing attitudes. You’re either with me or against me — you’re for an issue or you’re against an issue. Such passionate stances are great motivators on election day, but they are hardly conducive to building relationships across party lines. For that, individuals need to compromise with one another and share a reality-based view of the world.

Media Bias/Fact Check can help couples get on the same page and see reason even when surrounded by biased information. In the coming years, Dave said he plans on building on the website’s success and producing reliable fact-checks on thousands of media sources. Readers can expect Media Bias/Fact Check to continue calling out questionable media outlets and ferreting out bias across the political spectrum.

“At this point, our website will only help those who are evidence-based,” Dave said. “If a person declares ‘fake news’ whenever there is a position they do not agree with, then we will not be much help. However, if people are interested in evidence and willing to accept their own confirmation biases, then I think MBFC can help steer people in the right direction.”