The Scoop: Meatless Monday is a campaign that began during WWI and has continued to inspire individuals, couples, and families to eat less meat and more fruits and vegetables. Some people may think going meatless is difficult, but it can be as simple as substituting tofu for chicken or adding twice as many greens in a stir-fry. We asked two couples how they enjoyed their meatless cooking adventures, and they gave us some tips to make Meatless Monday date nights truly special.

Preparing a home-cooked meal is definitely one of the most classic and delicious ways to show you care. Such a heartfelt gesture means a lot to couples because you’re sharing a piece of who you are and what you like. Plus, you can get immediate brownie points by volunteering to cook for your significant other at the end of a long day.

Many couples enjoy dinner date nights at home where they can relax, maybe try something new, and heat things up in an intimate environment.

Meatless Monday, with its collection of recipes, blog articles, and other resources, can support couples who want to blend healthiness with deliciousness during their dates. The campaign urges people to do what’s best for themselves (and the environment) and reduce their meat intake — at least one day a week.

Some individuals, couples, or families may make a pledge to go meatless, but they may not know how to stick to that promise and still make flavorful, filling, and original meals on their own. That’s where we come in.

Our dating experts asked a married man and an engaged-to-be-married man what went into their Meatless Monday date nights, and they gave us some pointers for anyone looking to stir up romance on any weekend or weeknight.

Kai Olson-Sawyer, who’s married and has a 9-year-old daughter, said his family isn’t vegetarian, but they make an effort to pack more fruits and vegetables into their meals, particularly when cooking at home. Kai is a senior analyst who works on environmental issues, so the Meatless Mondays mission to protect animal rights and reduce carbon emissions is close to his heart.

Employment attorney Stephen Stecker and his fiancée, Nara Sandberg, typically try to cook vegetarian meals, particularly when Nara is in the kitchen. The couple enjoys joking around as they make healthy “foodies” together with a roll of fresh-made garlic bread to share.

“You can smell that delicious garlic bread toasting in the oven,” Stephen said. ” I call it bread potpourri.”

Kai and his wife enjoy all sorts of cuisine from Mexican to Japanese, and they enjoy experimenting in the kitchen as a way of spicing up their date nights. Kai said he often has to go the extra mile (to the grocery store) to satisfy his wife on their at-home dinner dates.

“What I think my wife likes above all is fresh food, so that means going to the grocery store to get fresh ingredients,” he said.

Kai will fill his grocery cart with lots of different, nutritious foods, including quinoa, beans, legumes, and mushrooms. Then he’ll get into the kitchen, put on a fun playlist of music, and start mixing his veggies in pasta or rice dishes. 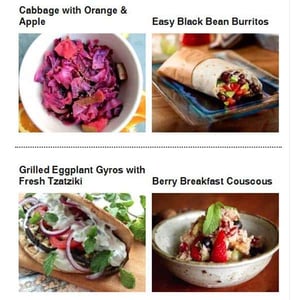 The Meatless Monday website shares many simple dishes that would be perfect for any date night.

Sometimes his wife will put a centerpiece or a vase of flowers on the table to add that romantic finishing touch to their meal.

A nice vegetarian meal doesn’t have to involve complicated steps and advanced cooking techniques. Sometimes going simpler on your date nights can allow you to spend less time stressing over the stove and more time laughing with your cooking partner.

Stephen said his go-to Meatless Monday meal is a simple stir-fry with tofu and veggies galore. He sticks to simple recipes that allow him to throw some greens in a pan and turn out a tasty meal within 20 minutes.

“My cooking skills are less Tom Brady and more Jimmy Garoppolo,” Stephen said. “So I cannot rely on a complicated recipe.”

Stephen said he’s been looking more at healthy recipes lately because he has a wedding coming up, and he wants to make sure he looks good in the pictures.

Food is a common joy that brings couples together and gives them something they can share. It’s no wonder that food is the centerpiece for many date nights — from cheesy flatbread pizza to cherry tomato cobbler, many vegetarian dishes can tantalize the taste buds and add a little decadence and sweetness to any night in.

Kai said his wife has wowed him many a time by making a quinoa enchilada dish topped with avocado or sour cream. He said he also likes preparing hearty soups with crusty bread or tortilla chips for dipping. These dishes warm you up from the inside out and lend themselves well to quiet evenings of conversation and connection.

“Salads are another thing that people seem to forget about as a good meal,” Kai said. “You can make different kinds of salads or sides to make your own version of a mezze platter.”

Stephen commented that it’s always a treat to get a little creative in the kitchen and explore new foods with his soon-to-be wife. Not only is it a good excuse to hang out at home, but it’s also a fun way to find new flavor combinations or ingredients. For instance, one night Nara made a jackfruit barbecue dish that blew Stephen away.

“I did not know even know jackfruit existed,” he said. “I did not even know it was one word!”

Both Kai and Stephen support Meatless Monday because they believe in the mission to eat healthier and improve the world one vegetable at a time. They may not be full-on vegetarians, but they’re doing their part to reduce meat consumption and up the quality of their meals.

Kai said being intentional about what goes on his plate has made him all the more appreciative of the smells, colors, and flavors of a healthy home-cooked meal.

“Having a Meatless Monday date night doesn’t have to be a big deal,” Kai said. “Keep it simple. Whatever type of cuisine or style of food that you like to eat, you can make it meatless. It’s also an easy way to start eating a little less meat if that’s what you aspire to.”

Meatless Monday Can Bring Couples Together

If you want to wow your date, you can take a page from the Meatless Monday recipe book and get into the kitchen. Whether you’re cooking for someone or with someone, you can satisfy your craving for romance by making a scrumptious meal for two and building the foundation of a fruitful relationship.

It doesn’t always take a lot of cooking prowess to impress a date — simply putting in the time and energy to cook something, set the table, and create an inviting candlelit dinner can be enough to inspire many warm and fuzzy feelings. Couples can crank up the heat on their date nights at home by making wholesome meatless dishes.

“I think a Meatless Monday date night is fun because it makes you think more imaginatively,” Kai said. “Instead of the same old meat and potatoes or pasta with meat sauce, there is an element of inventiveness that keeps things fresh.”

Meatless Monday has crafted all sorts of easy, vegetable-heavy recipes that couples can try out on their next date night. Bon appétit!