The Short Version: When Donald O’Finn started managing the old Freddy’s in 1996, he wanted to create a safe haven for musicians, artists, rebels, outsiders, and other soulful types in Brooklyn. He booked local bands to bring in the crowds and give people something to talk about. Today, the newly opened Freddy’s Bar & Backroom is a local institution known for its free shows, cheap drinks, and unique sense of style. Couples can have a date here and enjoy a live performance, make new friends, and hang out in a chill atmosphere.

About 30 years ago, Donald O’Finn was a bartender at O’Connor’s, a humble speakeasy-style bar in Brooklyn’s Park Slope. Locals knew the bar as the only place to get a hot meal after 10 p.m. It was a quiet place with a long history and zero music scene.

Donald soon changed that. As he made sandwiches and poured drinks for customers, he made conversation and met a lot of artists and musicians in the area. He realized the bar could offer a platform for their work, so he started booking live shows that acted as fundraisers for the now-defunct Lurch Magazine, which was run by a bar regular named Mike Morgan.

In 1996, Donald left O’Connor’s to join the crew at the old Freddy’s a couple blocks down. He brought many regulars and talented musicians with him, and the tough cop bar soon transformed into a more eclectic, friendly, and artsy haven. 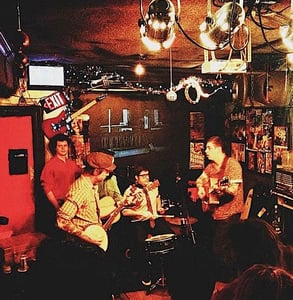 Freddy’s Bar & Backroom has become a rallying point for local artists and musicians in Brooklyn.

Donald even convinced the owner, Frank Yost, to let him host events throughout the week. In 1998, at the Old Freddy’s, John Pinamonti was the first Backroom performer, and Les Sans Culottes the second, and a musical tradition was born.

When the old Freddy’s closed its doors in the summer of 2010, Donald wasn’t going to let the community he’d helped build disappear forever. He joined forces with local legendary bartenders Matt Kuhn and Matt Kimmett to revive the beloved neighborhood bar by opening Freddy’s Bar & Backroom on Fifth Avenue. The resurrected dive bar opened in 2011 and been rocking it ever since.

Now, as the co-owner and booker of the new Freddy’s, Donald is constantly on the lookout for ways to wow folks and bring new people into the fold.

Freddy’s may have an old-school look, but its event calendar features many rising stars and local talent, and the one-of-a-kind shows attract people of all ages and backgrounds. Whether you’re going on a date or looking for an after-work retreat, Freddy’s is there to welcome newcomers, foster conversations, and create fond memories that last a lifetime.

When the new Freddy’s opened its doors, the owners tried to preserve the history and culture of the original location while giving it a fresh polish. They brought the entire Cir 1950s Red Mahogany Bar & Back bar, tables, chairs, and bar stools from the old location, but they also installed flat-screen television sets, a long church pew, and comfortable seating. The result was an interesting blend of tradition and innovation.

A Freddy’s regular named Bill Carney brought his mysterious band Les Sans Culottes to headline during the re-opening night, and then Fred Thomas, who was the bass player for James Brown, closed the night with a funky and soulful dance party that assured locals that the live shows would be just as wild in the new Freddy’s as they had been at the old. Nine years later, Les Sans Culottes still blasts their mock, pop, French lounge music, and Fred continues to perform on the second and fourth Fridays of the month at Freddy’s.

Freddy’s has become famous for hosting 60-80 performances a month and highlighting knowns and unknowns on its small stage. The backroom frequently reaches its full capacity of 50 people during its weekend shows, which typically include four local musicians or bands doing sets that last about 45 minutes. During the week, the bar has one available time slot for singer-songwriters, guitarists, comedians, and other low-key performers.

“Room capacity has never stopped us from putting on some of the best shows in Brooklyn,” Donald assured us. “It restricts the crowd size and band volume, but it intensifies intimacy.”

In the old days, Donald used handwritten calendars with slot times to book musicians over the bar top, but now Freddy’s has become so popular and in-demand as a venue that he’s had to create an online booking system to keep everything straight. It’s not as punk-rock as Xeroxing handwritten show schedules, but it gets the job done.

Freddy’s has a long tradition as one of NYC’s most popular dive bars and music venues.

Freddy’s offers free shows throughout the week and doesn’t have any cover charge at the door. The bar has a suggested drink minimum for show attendees, but even that isn’t really enforced. The bar owners are more interested in the party than in the profits, and they don’t want to monetize events and deter people from enjoying good music with good people.

Freddy’s has always supported a diverse creative scene, and it has launched many musical traditions, including the CasHank Hootenanny Jamboree and the first Annual Brooklyn Country Music Festival, which started in 2004 and is still going strong. Opera on Tap started at Freddy’s and now has chapters all over the world.

Donald has a deep appreciation for the many voices, styles, and personalities that find a home at Freddy’s, and he aims to promote inclusivity, artistry, and love with this humble stage in Brooklyn.

“It is a big part of who we are. It is part of the free and creative environment we are known for!” Donald said about Freddy’s shows. “I’ve always said that, if I can get a band in here one time and have their friends walk through the bar to get to the performance space, then I got ’em!”

As an internationally famous music venue, Freddy’s brings in talent from around the world and around the block.

The edgy and experimental calendar includes several regular performances and events. Dave Keener runs a Song Writer’s Death Match on some Saturday afternoons, and a punk duo called Even Twice plays at Freddy’s late night every chance they get. Some bands, like Pocket Monster and the American String Conspiracy, have been with Freddy’s from its very early days, while others are new to the stage and have a chance to win over fans.

A Freddy’s show can be chill and intimate, or it can turn into a fast-paced dance party. Joe Cantor seduces crowds with his guitar playing, but DJ C Prod-G turns up the heat with lively beats. Regulars have come to Freddy’s for a monthly knitting club, and otheres to dress in drag for some Transsexual Vaudeville shows. 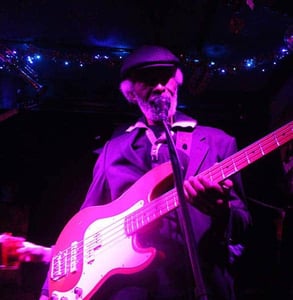 Fred Thomas was James Brown’s bass player for 33 years, and now he plays on Fridays at Freddy’s.

Freddy’s isn’t just for one type of music fan or artist. It welcomes everyone from twangy country singers to punk-rock bands. Its events have covered an imaginative array of entertainment — including an International Rock-Paper-Scissors tournament televised in Japan and a Doggy Fashion Show televisted in France — and it’s worth stopping by to see what the bar has going on.

On Sundays, the front room has a piano lounge, and the Backroom features VHS cinema or old-school karaoke hosted by H-Bomb & Emma C. Hammer. There is no teleprompter; instead, singers have lyrics on paper.

Comedy Mondays feature an “Ed Sullivan on Acid” stand-up performance. This is the longest running stand-up comedy event in Brooklyn. Donald said Janeane Garofalo is probably the most famous comedian to get a laugh here.

If you’ve got a date on Tuesday, you can head to Freddy’s to check out BluesDay TuesDay and listen to some bluesy guitarists, sax players, and bands, including Binky Griptite and Freddy Deboe. Every third Tuesday is also ladies night, which means some of Brooklyn’s finest female performers take the stage.

Whether you’re watching pyrotechnics, singing karaoke, or digging into a friendly holiday pot luck, you can count on Freddy’s to provide a lot of laughs and conversation starters throughout the evening.

Customers love the personal touch and gritty vibe at Freddy’s. The bar has a lot of funky decor, including a fish tank, a red bull statue, and a glittery stiletto heel, that has accumulated throughout its history. Donald uses his own artistic flair to create video collages that run in the background at the bar and are projected behind bands during some performances.

Many regulars add to the fun and personality of the bar. Freddy’s has created a quirky family of music lovers, artists, and bar flies, and they often inspire events, clubs, and activities throughout the year. Some spirited regulars even wrote and performed in an original musical “The Leonard Cohen Christmas” for eight years. 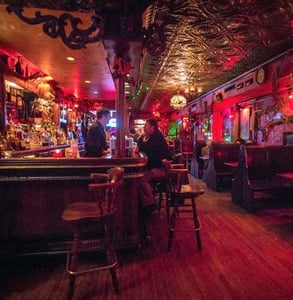 All it takes is one visit to fall in love with the whimsical and unique spectacle that is Freddy’s.

“Freddy’s basically has it all,” said Lauren M. in a Yelp review. “Divey vibes, delicious food, good drinks, a garden, live music, and a karaoke setup. What more could I ask for in life?!”

“The staff is friendly. If you come often, they’ll remember you,” said Sarah T. “It’s a great place to hang with a large group.”

“This is a bar like they don’t make ’em anymore,” said another New Yorker on Yelp. “A bar with longtime regulars…Go for drinks, a show, or just out of curiosity, and tell me you didn’t have a fine time!”

Donald said Freddy’s Bar & Backroom’s lasting success and popularity stems from the quality of folks piling in for drinks, music, and laughs every night. He credits their creativity and passion for making Freddy’s a show-stopping destination in Brooklyn.

“Going back to the beginning of the Old Freddy’s, I have always been very fortunate with the character and quality of both the staff and the regulars,” he said. “I don’t think sentient folks can walk through our bar and not get a comfortable sense of ‘Wow, what is this, exotic, strange, beautiful, old world, another world.’ We are not for everybody, just the good ones.”

As far as date activities in Brooklyn go, Freddy’s is a place you can find a lot of entertainment and romance. The events calendar is full of opportunities to discover, explore, listen, and learn, and it could be a fun experience to share with someone special.

Freddy’s welcomes people of all ages, orientations, and backgrounds, and it prides itself on having a little something for everyone.

As an artist turned barman, Donald relies on his intuition when booking talent for one-of-a-kind events. He said his biggest concern is entertainment value, not monetary value, and Freddy’s has thrived and established a loyal following as a result of his passion and integrity.

“I thought of the whole thing as a social experiment, an adult playground,” Donald said. “I learned the job by doing it. Experience is the best teacher of all. But there are no guarantees you are doing it right. I expected to make it big as an artist, not as a bar guy. But I did learn that the highest form of art is a life well lived.”