8 Dating Tips From Couples Who Have Been Married 50+ Years

My great-aunt was in her 20s when she met a young military man standing in line at a taco stand on the fairgrounds of a small town in New Mexico. Her beautiful red hair caught his eye, and he started chatting her up. Not long after, they got married, and they stayed together for over 60 years until he died at the age of 92.

Whenever someone would ask them for their advice on how to make a relationship last, my great-aunt would look heavenward. “Lord knows,” she’d say.

And my great-uncle would just laugh and tell us, “You have to have a sense of humor.”

If you’re looking for the secret sauce to make your relationship work, turning to your elders for wisdom or guidance isn’t a bad idea. Old married couples often have a pretty good idea about what makes a marriage last because they’ve spent decades resolving conflict, overcoming obstacles, and keeping their romance alive. We’ve combed through the dating and relationship insights of several couples who have been together for 50+ years to help young couples replicate their success. Here’s what we learned.

Virginia and James met in the seventh grade and never dated anyone but each other. They were married in 1954 after graduating college. In 2017, they told ABC what they thought was the secret to their long and happy marriage.

“Communication,” Virginia said. “We communicate with each other.” She said that, whenever they have a disagreement, they talk it out, and they keep talking it out until it’s resolved.

“We have so few conflicts, but we talk about it,” James agreed. “She expresses her side, and I express mine.”

A gerontologist named Karl Pillemer interviewed more than 700 Americans who’d been married 43 years on average. He concluded that communication was one of the pillars of a lasting marriage. “Even the toughest old guys said you have to be able to convey your feelings and talk about important experiences,” Karl said on “The Today Show.” “As one old fellow said colorfully, ‘Keep yapping at one another.'”

2. Always Find a Reason to Laugh Together

Jean and Paul Vagianos have been together 30 years, and they had two pieces of advice for couples. “Find your best friend and marry them,” they told the Huffington Post. “And weekend mornings are made for hours of talking and laughing over coffee.”

“Life is hard. Marriage is hard. We find a reason to laugh every day. Because of that, we have stayed in love for 51 years.” — Deborah W., a 71-year-old married woman

As the years go by, being able to laugh and enjoy each other’s company is a great gift. Many couples said they enjoy similar activities, and that keeps them connected.

“We do things together,” said Sammy Waller, who has been married to the same woman for 75 years. The 97-year-old said it was love at first sight for him. They now have six children, 11 grandchildren, and 19 great-grandchildren. “We just got along. I didn’t go to the bar and leave her home,” Sammy said, “and she didn’t go places and leave me home. We just hung together. I’m still hanging.”

3. Be Patient — Especially During Conflict

Frank Hoffman met his future wife in the 1940s while they were vacationing separately at a resort in the Catskills. Frank spotted Thelma walking out of the dining room of the resort, but his friend got to her first and asked her out. “But I had a car, and he didn’t,” Frank said. “So we’d double date, and, after a while, we switched it.” Frank and Thelma got married on June 12, 1949. They live in Savannah, Georgia, where they raised two children.

Thelma said the secret to her long marriage was simple: love and patience. She said her relationship has lasted because she and Frank are both willing to give and take. Even when a conflict arises, they put their relationship first and work things out.

According to Thelma, the secret is “loving one another and a lot of patience. And knowing what’s important in life.”

4. Choose Someone Who is Your Best Friend

John Kasper met his future wife on the playground in the Twin Cities. They were 10 years old then, and now they’re in their 90s and still in love. Though, they said, the reason they hold hands as they walk has changed — now they do it to stay upright.

“It seems impossible that we’re that old,” said Evie Kasper in a video that had over 40 million views on Buzzfeed. “The important thing in a marriage is to be nice to each other and to be good friends. To remember that, all the time.”

“We always kiss goodnight. Always. And profess our love for one another,” said John. “I don’t think we’ve ever missed that.” After 75 years of marriage, that’s saying something.

“Part of what makes them so charming is they both have a great sense of humor,” said Danni Munro, who interviewed her grandparents about their relationship. “That’s got to have a huge impact on the success of a marriage.”

5. Don’t Engage When the Other Person Wants to Fight

A 76-year-old married woman named Marianne S. said she never lets a fight with her husband last longer than 10 minutes. “There’s no need. No need to be the winner of a fight,” she said. “Instead, be the one who grabs the other and says, ‘I love you. Let’s move on and let this go.'”

Frank joked that he handles marital conflict by letting his wife win all their fights. Even when his wife wants to argue with him, he doesn’t let a simple disagreement escalate into a serious fight.

“He doesn’t argue. He doesn’t fight,” Thelma said. “It’s very difficult to make a point when you’re doing the arguing; he just will not argue.”

“We work it out, and we get along. We go forward,” Frank said. “We’re both understanding and can appreciate each point of view, and we try to correct those problems. It’s discussed and dropped.”

6. Try to Understand How Your Significant Other is Feeling

Empathy is an important part of any relationship. A good spouse needs to be a good listener because their goal should be to make their significant other feel, well, significant. Whether you’re dating or married, making that special someone feel like what they say, think, and feel matters to you is a crucial part of building a relationship.

“Try to understand each other,” Virginia advised. “And try not to go to bed angry with each other.” 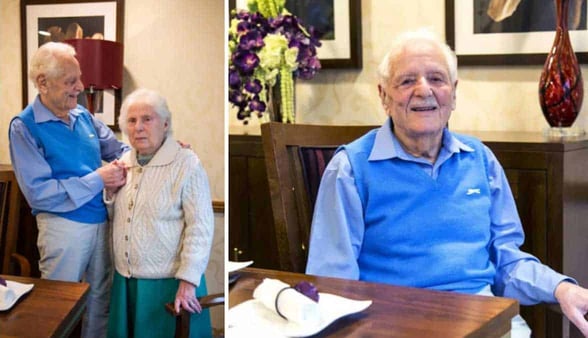 Betty and Morris, who’ve been married for 60+ years, said it’s OK to argue, but move past it once it’s over.

“People say ‘never argue,’ but the thing is, if you have an argument, you get over it,” said Morris in an interview with Buzzfeed. Morris was 19 years old when he met Betty, his future wife, at a Christmas party in 1947. They got married two years later and have been together ever since.

“When you meet someone you feel is right for you, then accept that, but don’t rush into it,” said Daphne, who had been married for 50 years when her husband passed away. “Give yourself time to make sure it’s right. Because if it wrong, it’s not going to last.”

7. Make Time for One Another

Grace H. said one thing that worked for her marriage was eating dinner together every night. They would sit down at the kitchen table and connect while they ate. They also made time for each other for at least one day on the weekend.

8. Stick It Out When Things Get Tough

Conflict is going to happen as the decades roll by, and those trials can make or break a marriage. When you reach a rocky road, how you act is going to determine if your marriage makes it.

Linda P. told Elite Daily she got married at age 18 because “it was just what you did.” At first, she said being married was fun and easy — and then they had four children, and everything got a little harder.

“There is no secret. Marriage is hard work.” Joe P., a 71-year-old married man

“We grew up together, and we stayed together as our kids grew up. The secret is that it is hard,” Linda said. “When you realize that, you are on track to having a marriage that is filled with love.”

“There is no secret. Marriage is hard work,” Joe P. agreed. “If you want it to work out, you have to not give up on it.” Joe added that it takes years of commitment and a lot of personal strength to stick with a marriage — even when things get rocky — and make it go the distance.

There you have it. Hopefully these words of wisdom from old married couples, like my great-aunt and great-uncle, have inspired you to strengthen your relationship for the long haul so that, one day, you can sit beside your sweetheart and tell young people how you did it.

Whether you’ve just started dating someone or you’ve been together for years, these touching dating tips are important reminders of what really matters when two people decide to spend their lives together.

“Love one another and create a companionship,” said Frank Hoffman after 67 years of marriage. “Your relationship should be one that you like to do the same things or you think about doing the same things.”