And Vinyly™ Memorializes Relationships by Pressing Loved Ones’ Ashes Into Records

The Scoop: And Vinyly offers loved ones a nontraditional way to commemorate their departed loved ones. The company facilitates the preservation of ashes onto a vinyl record. Family members can choose to record a favorite song or the deceased person’s voice on vinyl. The company gives customers the chance to design the album sleeve and a sticker that incorporates family photos or favorite expressions of the departed. People who have lost their partner or spouse sometimes make these records to honor them with a touching and meaningful memento of their relationship.

Jason Leach grew up hearing stories about how his great-grandfather’s ashes were scattered at sea. An unexpected gust of wind had blown the ashes backward, and crewmen had to sweep them into the water. Decades later, a similar accident occurred when he and his family tried to scatter his grandfather’s ashes into the ocean. The wind blew back into their faces, and Jason ended up with an eyeful of powdery remains.

Jason came up with the idea for And Vinyly out of a desire to find a more dignified ending for himself. The 30-something musician thought about what he wanted his loved ones to do with his remains, and he asked his friends to help brainstorm ideas.

“In the West, we’re not surrounded by death. I started to find it interesting,” he said. “I thought a lot about how I want to be remembered.”

Around the same time, he happened upon a new article about writer Hunter S. Thompson’s unusual memorial. He had his ashes put into fireworks.

The story gave Jason an idea: What if he put his ashes into a vinyl record? That way, his loved ones could keep a piece of him and remember him when listening to music at home.

Jason started And Vinyly as a side gig to see whether anyone else was interested in this unique way to preserve a loved one’s ashes and their memory. It has resonated among music lovers and has gotten attention for its touching approach to memorials.

“I put a website together exploring the concept. People were interested, especially the press all over the world. It almost pursued me,” he said.

Instead of a traditional urn, And Vinyly offers the option to customize an album in honor of their loved ones (or in preparation for their own death). All vinyls come with a customized sticker on the center and a sleeve that typically features photos of the deceased individual.

Whether it’s in recognition of a spouse, a parent, a sibling, grandparent, or a friend, And Vinyly can help with the mourning process by creating something beautiful that can be shared with loved ones and passed on for generations.

Records Include Meaningful Recordings and Music

Jason told us he didn’t expect his vinyl memorial to become a full-fledged company. It was a thought experiment that took off thanks to national press and widespread interest in the music community.

And Vinyly’s reputation grew rapidly, and it became a useful resource for people who weren’t satisfied with the burial or cremation options at hand. 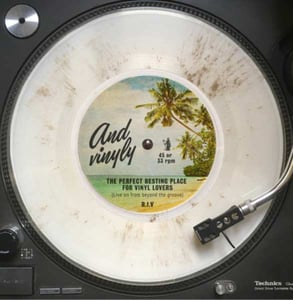 And Vinyly can create a personalized tribute with ashes sprinkled into the vinyl record.

Most of the company’s clients are women who are making records for a loved one. The website sees a lot of widows who want to commemorate their significant romantic relationships. The company typically memorializes people, but occasionally a pet owner will use the services as well.

Clients can plan ahead for themselves or on behalf of a loved one who has passed on.

“Some people are planning for themselves. It’s great because you can pay for it upfront and get it made upfront. Your relatives don’t have to spend money. You can even hear what the vinyl is like before you’re in it,” said Jason.

When developing the records, clients can decide what they want to have on the album. This can include phone messages, film clips, videos, and other snippets of the loved one’s voice.

After a client approves the record, And Vinyly asks for a small amount of the deceased person’s ashes, usually less than one teaspoon per vinyl. Most clients order enough records to give one to each family member or friend. It can be a touching gift for funeral attendees or anyone who had a close relationship to the departed.

And Vinyly has bespoke pricing, but Jason told us there isn’t much of a price difference between getting one record or getting 20.

One of And Vinyly’s first customers was John Hobson from Scarborough. He and Jason met at a pub, and the concept of memorializing loved ones on vinyl struck a chord with John. He decided to honor his mother by putting her ashes on vinyl recordings of her discussing her family history. That way, her story would be saved with a piece of her with it.

“She had a phenomenal memory,” John said. “It was amazing, and she did tell good stories.” 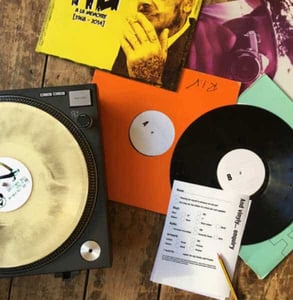 And Vinyly creates touching keepsakes that family members and friends can add to their personal music collection.

Jason helped John create the perfect tribute for his dearly departed mother. The album’s sleeve features photographs of his mother and his family through the years. He said it is one of his most precious possessions.

And Vinyly honors the wishes of customers and customizes options for everything from the recording to the record sleeve and sticker.

Many of the album sleeves feature photographs, artwork, and, of course, birth dates and death dates for the deceased. The record stickers typically match the sleeve. Jason said customers often say they enjoy going through their photo albums and treasured keepsakes in search of the perfect images to include on the vinyl record.

Singer Joe Talbot of the band Idles is perhaps the most famous of And Vinyly’s clients. When he and the band were recording an album in 2017, they focused on his mother, who had recently passed away after a long illness. When the band’s debut EP “Brutalism” came out, Joe and the band wanted a way to commemorate his relationship with his mother.

“She was that album. That’s why she was on the cover,” Joe said.

Not only did they put her on the cover, but they also made records with a sprinkling of her ashes pressed in them. Joe said he thought that would be a fitting tribute to the woman who inspired the record.

And Vinyly helps people create a voice or music recording as a tribute to a loved one’s life. Such tributes can be a good way to recognize the friendships and relationships that mean the most.

“It’s nice because so many more people can have a record, rather than just the few family members who might have an urn,” said Jason. “Friends don’t always get a memento of loved ones who they spent lots of time with over the years. They love and cherish these records, and it’s great to have something that’s personal.”

And Vinyly records offer a way to keep a loved one’s story alive after they have passed on. The record can provide a more dynamic impression than a photo in an album or a headstone in the graveyard. And that appeals to some people who want a memory to last.

Jason said he likes to think of And Vinyly as the closest thing to time travel humanity has available.

“It’s your voice on there. I would love to have a record of my great-great grandfather, and I like to think of my future descendants speaking to them in 150 years,” he said.

And Vinyly isn’t for everyone, but some people have found peace and enjoyed the harmony of the concept. The service is a way to ensure that a person’s stories continue on after death. It’s much more personal than an urn on a mantlepiece, and it often becomes a meaningful family heirloom.

“It’s just something that your great-great-great grandson or granddaughter can be sitting in their room listening [and] reading the cover and learning a bit about you, really. And about the time when I was here,” Jason said.