The Scoop: EMO nite invites singles and couples to join a head-banging, heart-thumping, voice-raising event where pop-punk songs of the past come back with a vengeance. The DJs play classics from the 2000s and encourage everyone to be an all-star and have the time of their lives. Since the COVID-19 pandemic, Emo nite has taken the party to a virtual stage with frequent video livestreams that continue to show the emo community love, even if they can’t gather in person.

In 2014, two friends saw a need for a pro-punk oasis in Hollywood. Morgan Freed and T.J. Petracca are lifelong punk fans who rejected the phoniness and glam of the mainstream nightlife.

“All the shows and parties in L.A. were so much about who you knew and going there to look cool,” T.J. said. “It wasn’t actually very fun.”

So, one fateful Tuesday night, these punk enthusiasts threw a party at a dive bar to unite all the rebels, goths, and emo kids in the area. The bar reached capacity within hours, so they moved the event to the Echoplex on Glendale Boulevard. Everyone continued dancing and singing late into the night.

That was the beginning of EMO nite. The idea kicked off in Los Angeles, and it grew into a nationwide effort to support the emo community — one party at a time. Emo nite events promise to be all about the music and the fans. There is no VIP section or reserved seating. Everyone is on equal footing in the mosh pit.

Singles and couples can embrace their inner punk at Emo nite events.

Emo nite brings in DJs, plus the occasional musical guest, to play punk hits from the 2000s and let the crowd dance and sing to their heart’s content. The vibe at these events is full of nostalgia, diversity, and out-loud fun.

Over the last seven years, Emo nite has captured the hearts of singles who have fond memories of old-school punk music playing at prom nights or on iPod shuffle playlists. These old-school songs were the soundtrack for a generation of misunderstood youth, and they continue to evoke emotion and make outsiders feel included.

“It’s just one big, sweaty, fun mess where you can sing along to your favorite emo and pop-punk songs from the mid-2000s,” TJ said.

Emo nite makes a strong impression by featuring the head-banging hits of Good Charlotte, The Killers, Fallout Boy, Blink-182, and other pop punk giants. Singing along to the music is encouraged. And it’s not unusual to see singles embrace the chaos and use it to fuel their next chemical romance.

Attendees enjoy the chance to layer on their black eyeliner again and join a crowd of people with similar tastes and temperaments.

T.J. said the sweet spot in terms of age is between 21 and 35. Basically anyone who was a punk kid, goth adolescent, or emo teen in the 2000s. Emo nite invites young adults to relive those glory days, listen to their favorite punk songs, and make new friends in the emo community.

“It’s people from all walks of life, but I’d say many people were that weird, creative emo kid at their school,” T.J. said. “We went through that emo phase, and that never really leaves you.”

Emo nite has tens of thousands of fans across the U.S.

The pre-pandemic Emo nites were crowded celebrations with DJs playing hit after hit. The events rely on classic pop-punk music to get people in the doors. The songs are all the original hits heard on the radio, not covers or alternative tracks. Some events have live bands and musical guests to add to the fun.

Emo nite made a name for itself in Los Angeles and rapidly expanded to meet demand for a proper punk event in other parts of the U.S. The party has reached over 20 cities from coast to coast. In New York City, some of the events have lasted until 4 in the morning.

T.J. said he has seen lines wrap around buildings in excited anticipation for an Emo nite event. He has also seen many love stories come alive in the heat of the moment. In fact, that’s where his love story began.

A few years ago, T.J. uploaded a photo of himself at an Emo nite event with the crowd in the background. Unbeknownst to him, his future wife was visible in the photo. They matched, and she messaged him, “I can’t believe you’re using my picture to pick up girls.”

Even though they didn’t meet at that Emo nite, it gave them enough common ground to spark interest and get a conversation going.

Building a Virtual Community During the Pandemic

Throughout the years, Emo nite has built momentum in the punk world and gained a reputation for throwing a wild, carefree party. But the COVID-19 pandemic brought a significant change to this space. Without missing a beat, the team shifted from hosting live events at local venues to broadcasting live shows for a digital audience.

By April 2020, Emo nite was streaming shows about five times a week and seeing tons of people logging in to dance and party in their bedrooms or common areas.

The Tuesday night shows were particularly popular because they took music video requests from the audience. A person could dedicate a song to their partner or their friend, and the hosts would deliver the message and play the video for everyone.

Emo nite engaged audiences with its dynamic, imaginative, and authentic content. It created a sense of togetherness that got punk lovers through personal difficulties and gave them a reason to cheer. One time, Mark Hoppus from Blink-182 even came on screen to surprise a superfan with a special performance.

“We tried our best to bring in the full Emo nite experience,” T.J. said. “It was a variety show of DJ sets, live performances, and surprise content.” 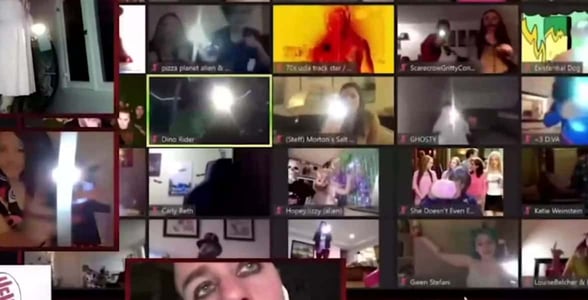 Audiences can expect a lot of fun and entertainment during Emo nite’s livestreams.

Emo nite currently hosts a bi-monthly livestream show and has a Patreon account with extra podcasts, videos, playlists, and content available. Members of the Nite Fam gain access to a punk-friendly Discord channel where they can make friends and talk about their favorite songs, bands, and shows without restraint.

The support from everyday fans online has helped EMO nite stay in business through the lockdowns. Looking ahead, Emo nite will continue to jump on opportunities to strengthen and support its fan base by playing classic punk music at online and offline events.

“I’ve seen some members of our virtual community start dating each other,” T.J. said. “It serves as a good icebreaker. If you like the same music, it’s a good way to connect right off the bat.”

Emo nite started with punk-loving friends who were so over the pretentious music scene in L.A. and wanted to enjoy good music with real people. In 2014, they threw a raging punk party, and it grew into a nationwide phenomenon.

Although Emo nite has currently paused its live events, the pop-punk music continues to play on livestreams and virtual shows. These events offer a safe haven for singles and couples in the emo community. It’s a great opportunity to let loose with friends and get to know people who wear black and live with high emotion.

“It’s meant a lot to see the way our digital community has grown and embraced all of this,” T.J. said. “I really enjoy hopping into these Zooms with people and hearing their stories about how much these streams have helped them get through the pandemic and feel less lonely.”