The Scoop: The allure of international romance has tempted many men to go on Ukraine dating sites and put their hearts on the line. For the last 10 years, UkrainianDating.co has welcomed and supported international daters seeking genuine connections online. UkrainianDating.co is a well-established dating platform where Western men can meet real Ukrainian women and build a long-distance relationship that leads to marriage.

International dating sites have gotten a bad reputation in the dating industry because some of them have allowed scammers to run rampant. Certain disreputable sites promise marriage, yet only offer fake profiles and frustration to users.

Fortunately, not every Ukrainian dating site falls into that stereotype. UkrainianDating.co has taken a stand against dishonest business practices by offering real profiles, legit matchmaking services, and transparent pricing.

UkrainianDating launched over a decade ago to provide real assistance to marriage-minded singles looking for love abroad. Its international following includes men from all over the world — from the U.S. to Italy — and its single women database is centralized in Ukraine.

Ukrainian women on this dating site range in age from 31 to 65, but they all share a common desire to marry a man from another country. 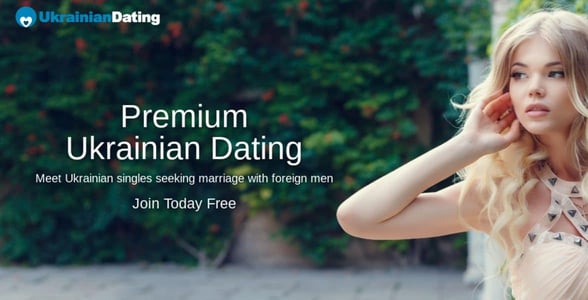 UkrainianDating.co is a secure dating site backed by CupidGuard technology.

The UkrainianDating team takes pride in the quality of its female members. The moderators are diligent about removing inauthentic and inactive profiles from the database because they want to make sure only honest and active daters show up in its search results.

“These are not young models. They are real Ukrainian women,” a spokesperson said. “We are not trying to sell anyone a Ukrainian dating fairy story where an older guy can marry a young beautiful Ukrainian woman.”

Over the years, UkrainianDating has distinguished itself as a trustworthy place to meet authentic singles and spark an international romance that leads to marriage.

The Team Promises a Scam-Free Environment

A man named Stefan Hendrick established UkrainianDating.co in 2009 because he wanted to make international dating more safe and accessible for single men who want to meet authentic Ukrainian women.

He established an upstanding dating platform where marriage-minded adults could mingle without worrying about scam profiles and expensive fees.

UkrainianDating is part of a chain of independent niche dating platforms powered by the RedSquareCupid network. This long-standing Russian company reaches a global market with its diverse offerings, and it appeals to romantics who don’t let borders stand in the way of love. 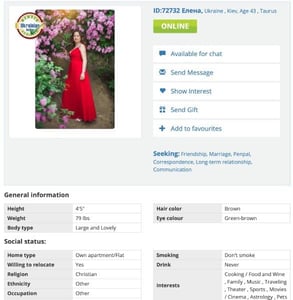 UkrainianDating verifies a woman’s photos and profile information before publishing it online.

The vast majority of women on UkrainianDating are over 30 and serious about settling down with a foreign man. The dating site does not promote young models or actresses. Its dating personals show women as they are and provide important details about her lifestyle and relationship goals.

For instance, a woman can disclose in her profile whether she’s willing to relocate to another country.

UkrainianDating has put up a CupidGuard shield to keep users safe as they browse for dates online. The site uses a combination of technology and manpower to screen new members and remove online fraud from the website.

Fraudulent members have no place on the UkrainianDating site. Once the CupidGuard system identifies a fake profile, it is swiftly and permanently deleted from the database. That way, users can have greater peace of mind that the people they chat with are genuine.

“We have a top-notch scam-free dating experience,” the UkrainianDating team said. “UkrainianDating.co uses CupidGuard technology to keep the site totally free from scammers.”

It only takes a couples minutes to complete a free profile on UkrainianDating.co and see what the site is all about. The free membership includes unlimited browsing, but not unlimited communication, so it’s a good test run for newcomers to international dating.

Free members can use search filters based on age range, appearance, and lifestyle to find compatible women, and they can send likes to show their interest. All women can send messages for free on UkrainianDating, whereas men must invest in the dating service if they want to make a genuine connection. 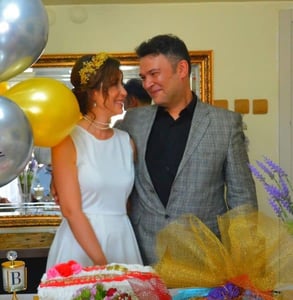 Saban and Irina met on UkrainianDating, and now they’re married.

UkrainianDating is not a pay-per-letter site. Its subscription plan unlocks all communication windows and allows men to chat with any women they like. Single men can upgrade to a premium membership for a monthly fee of $32.

Unlike some international dating sites, UkrainianDating does not require users to only chat through its platform. They are free to exchange personal contact information and communicate via Whatsapp, Kik, or another international chat app.

The UkrainianDating team does not set up meetings, first dates, or matchmaking events for its users. Couples have to make those arrangements themselves.

Over the years, the UkrainianDating team has seen many success stories arise between members who hit it off online, started a long-distance relationship, and eventually got married.

Saban lived in Istanbul when he joined UkrainianDating and started courting a Ukrainian woman named Irina. They are now happily married. “I have used many Ukrainian dating sites with no success, but I found my love finally on UkrainianDating.co,” Saban said.

UkraininanDating gives couples like Saban and Irina the opportunity to find common ground and establish a solid relationship. Physical distance doesn’t matter to users of this Ukrainian dating site because they have online chat tools to bridge that divide and create emotional intimacy.

“We are not selling fantasies; we are selling realities,” the UkrainianDating team said. “We have real women looking for serious men. Not young dolly birds looking for sugar daddies.”

UkrainianDating.co isn’t a typical international dating site. It doesn’t use stock photos, fembots, and other shady tactics to trick users into paying for something that isn’t real. The UkrainianDating team is honest about what they can offer Western men, and they encourage genuine relationships to blossom as a result.

Many international couples have said in testimonials that they never would have met had it not been for UkrainianDating.co. This dating site connects marriage-minded men and women in a user-friendly forum, and its chat tools empower them to pursue serious relationships on their terms.

Instead of promoting a fantasy, UkrainianDating maintains a database of real people who want to find international love and marriage.

“There are many older Ukrainian women looking for foreign men for marriage,” said the Ukraine Dating team. “If you are one of those men with realistic expectations and searching for a Ukrainian woman within a realistic age group, then Ukrainiandating.co is definitely for you.”