The Scoop: Since 1999, TGPersonals.com has given trans men and women a place where they can be themselves and find dates who cherish them. The trans-friendly dating site has cultivated a US-based membership of over 189,000 users and promoted 100% free chat, search, and matching features. TG Personals Founder Mike Kasper said he currently runs TG Personals as a hobby because its operating costs have exceeded its revenue since Google AdSense banned the platform in 2012. However, Mike has pledged not to charge his members for the niche dating services, and he intends to remain true to his values and continue supporting transgender singles and their admirers in a free, safe, and welcoming online community.

In the mid-1990s, a college student named Mike Kasper started chatting with a transgender woman he’d met online. It was a simple online crush, nothing more, but then his college roommate spied on his communications and revealed his private life to the entire school. Word about Mike’s affiliation with a transgender woman spread, and many of his peers made a joke out of it.

But Mike didn’t think it was so funny. He’d witnessed firsthand how ignorant individuals can shame someone for their choices, and he refused to give in to their peer pressure.

He had no plans to meet the transgender woman he had been talking to, but he did pursue a long-distance relationship with another trans woman on a dating site.

“I learned two important lessons from that experience,” Mike said. “First, that there was no difference between the transgender and genetic women I had dated, and second that online dating was the best way to meet someone.”

Mike said the major drawback he saw to online dating was how much it cost users to actually meet and communicate with one another. He decided to do something about that by launching a 100% free transgender dating site where singles could feel free to be who they are.

He launched TGPersonals.com in 1999 as a safe haven for transgender singles and anyone who wants to date transgender singles. He offers all features on his dating site for free and has promised to never use subscription plans or paid features to turn a profit. Instead, he uses banner ads and affiliate partnerships to generate revenue.

“The reason I can do this is that the sites run on open source software,” Mike said. “For a few hundreds dollars a month in hosting fees, anyone with the right motivation could start a dating site. Although they should be aware the internet is not the field of dreams. Building a great web site is not enough. You also need a strategy to promote your site and build a community of users so your site reaches that critical mass.”

A Labor of Love Staffed by Volunteer Admins

Originally, Mike used a modified version of the WWWBoard script from Matt’s Script Archive, an open source Perl/CGI script, to run the site, but he found the layout and functionality too limited to be useful for the average online dater. Mike continually tweaked the design and looked around for different solutions until he settled on Elgg in January 2011. Elgg offered a highly customizable open source networking software that was perfect for TGPersonals.com’s needs.

“TGPersonals.com had just started generating a profit for the first time through the Google AdSense program,” he said, “so I decided to hire a contract programmer to help create custom Elgg plugins so I could move TGPersonals.com to Elgg.”

At the same time, Mike launched a mainstream dating site, MyFreePersonals.com, in hopes of replicating TGPersonals.com’s success for a larger market. Both sites run on the same software, but TG Personals is by far the more popular product because it fills a need in the online dating space. Transgender singles can feel marginalized on general dating platforms, so they appreciate a dating community where being trans isn’t a dirty secret but actually something desirable.

“Running a free online dating site takes a lot of time to do, but it’s a rewarding experience.” — Mike Kasper, Founder of TG Personals

Today, Mike and a team of volunteer admins monitor TG Personals and make sure it remains a safe and friendly place for singles of all orientations and backgrounds. They closely monitor the profiles and content on the dating site to protect vulnerable members from being taken advantage of or harassed.

Yet, its strict safety measures failed to satisfy Google AdSense, which removed TG Personals from its ad program in 2012. Mike said that, even though he and his team cracked down on nude photos and other inappropriate content, they didn’t have the resources or inclination to pre-approve all content on the site. Google AdSense banned TG Personals for displaying dating profiles that used the word “bondage” and posted user pictures of themselves in provocative poses.

“I cannot prove it, but I got the strong impression that Google was being so severe with my sites due to the fact that they contained transgender personals,” he said. “I believe some of their advertisers objected to having ads being displayed on a transgender dating site, and Google took action due to those complaints.”

TGPersonals.com has over 189,000 current users, and MyFreePersonals.com has over 80,000. These stats do not include members who joined the network and then deleted their accounts. Mike told us 80% of the TG Personals community live in the US, while the rest live in Canada, the UK, Australia, New Zealand, and other predominantly English-speaking countries.

Some users are single transgender men and women while others are cis daters who are interested in meeting and dating a trans person. Mike said straight men far outnumber transgender women on the site, so the women tend to have their pick of partners. TG Personals requires users to state their intentions when creating their profiles and separates those looking for love from those looking for sex. 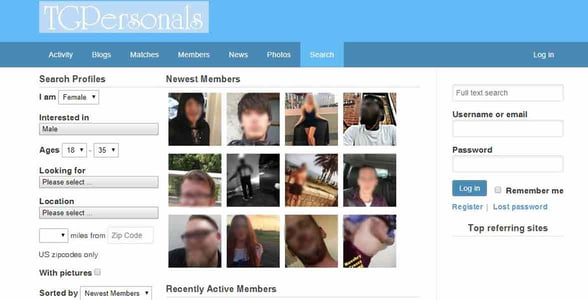 Anyone can create a profile on TG Personals and start chatting for free.

Mike said he plans to expand the gender options on the site in the coming years and grow his team to include more volunteer site admins who can screen profiles and photos. TG Personals members can also expect to see improvements to the site’s messaging system.

“Now that the majority of users are using mobile, they really expect a messaging system on a site to mimic text messaging,” he explained, “so that’s another area I’d like to pursue as well.”

It’s difficult for dating sites to track their success stories. Oftentimes, a member who has found a relationship will simply stop visiting the site or delete his or her account without explaining why. Couples in the bliss of a new romance may not think to write a thank you to the dating site that introduced them in the first place.

For the time being, TG Personals only accepts zip codes in the US. Other users can search by country.

However, Mike said he has received dozens of thank-you messages from TG Personals members over the years. Some have gotten in long-term relationships while others just appreciate having a community that understands and accepts them for who they are.

In 2017, one user wrote, “I met someone here. Thank you for the free website. My partner is planning to bring me to the US.” Mike said this was the first TG Personals marriage he had heard about, and it made him happy to help advance civil rights on a global scale.

Transgender singles can have a difficult time on mainstream dating sites or apps — not only do they face harassment from other users, but they can also be banned or blocked from the platform because of their gender identities. So it’s important for them to have a safe and accessible dating environment, which is what Mike strives to foster. He values the integrity of the dating site and its mission to support transgender singles and their admirers throughout the world.

“I’m actually the most proud of being able to offer a completely free service,” he said. “I’ve pledged never to sell user data to anyone, and I don’t have investors or venture capitalists so I can maintain complete control of my sites and their dating profile databases.”

TG Personals is a Safe & Reliable Place to Connect Online

Although Mike has faced opposition from his roommates, his classmates, and even Google Ads, he has not wavered in the belief that transgender singles are equal to cis singles and should have every opportunity to find friendship, romance, and love online. He started TG Personals in 1999 to support transgender dating and create a community free from judgment.

Today, TG Personals is a completely free dating resource for singles hoping to find someone who loves and accepts them for who they are.

“Running a free online dating site takes a lot of time to do, but it’s a rewarding experience,” Mike said, “knowing that just spending a few hours a week you can help people to find love.”