The Scoop: It isn’t always easy for members of the LGBTQI+ community to be themselves, especially when discriminatory laws and attitudes are still prevalent in many parts of the world. TAIMI is an app that combines aspects of social media and dating platforms to help foster connections among those members of the global LGBTQI+ community. Users can view posts and videos from other members and find like-minded friends or romantic partners.

Alex Pasykov believes that members of the LGBTQI+ community around the world should have the chance to express themselves freely. That belief drove him to develop the TAIMI app, which combines elements of social media and dating platforms.

“Alex wanted to develop a platform where LGBTQI+ people had a space to voice their thoughts and opinions without the fear of harassment or bullying. TAIMI stands for that freedom of expression, equality, and diversity,” said Helen Virt, Head of Business Development .

Individuals face discriminatory laws aimed at their sexual orientation or gender expression in more than 70 countries. In some of the most repressive countries, people suspected of being LGBTQI+ can be imprisoned or worse.

The TAIMI app offers members of the LGBTQI+ community a place to make friends or romantic connections.

“The company’s goal is to contribute as much as possible to impact LGBTQI+ individuals worldwide. TAIMI is working on partnerships with organizations in places where being yourself continues to be illegal,” Helen said.

That mission is also important to the TAIMI staff because they are members and allies of the LGBTQI+ community. Team members live around the globe and communicate with TAIMI users in many different languages.

“TAIMI has come a long way from its humble beginnings. We’ve become a truly global company with staff working in every corner of the planet,” Helen said.

The goal to build a global community is what sets TAIMI apart from other LGBTQI+ dating and social media apps. Instead of only giving users a way to meet up for short-term flings, the app emphasizes togetherness by connecting people as friends, allies, and partners.

Users Can Find Both Friends and Dates

TAIMI has more than 7 million users and counting, and while 85% of those identify as LGBTQI+, 14% are allies. Those allies often use the platform to interact with others or show their support for the community.

The app — available on iOS and Android — has a presence in 45 countries, and the company has plans to continue expanding. The app is available in many languages, including English, French, German, Italian, and Spanish, among others. 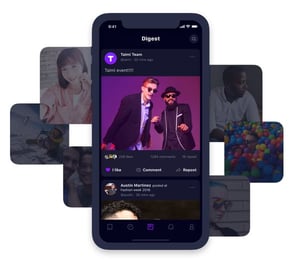 “For now, most of our users are in the United States, Canada, and the U.K., but recently we’ve seen tremendous growth in French-speaking and Spanish-speaking countries,” Helen said.

When users download TAIMI to find friends or dates, they can use it as they would many other dating platforms. They can search for people by their characteristics, swipe on the users who interest them, and chat with those they deem compatible.

Other helpful features include video call matches and a function that lets users search for others near them who have found their profile appealing.

Users also appreciate TAIMI Spot, which lets them search for partners or friends in particular locations around the world, not just in their current location. And users can send other members a TAIMI Rainbow Like, which cuts through the pleasantries and says: “I really, really like you.”

TAIMI also offers a paid subscription that provides more robust features than those available in the free version. TAIMI XL subscribers can like more members, see every user who visits their page, and boost their profile so it’s easier to find, among other exclusive features.

The most significant difference between TAIMI and other dating apps is that users can see more about potential matches before making contact. They can share pictures and videos, write their thoughts, and interact with others through their TAIMI pages. Then, they can look through that content to see if they relate to what others post.

Now that a global pandemic has caused people to turn to online communities more than ever before, it’s perhaps no surprise that the social media features of TAIMI are growing in popularity.

“Since the start of the Covid-19 pandemic, the social networking aspect of TAIMI has nearly doubled, with more than 25% of new users joining groups, creating posts, and sharing stories,” Helen said.

One of the most popular social networking features on the app is groups. Users can create groups that others can then follow. For instance, they could follow the Bad Boys Club or Wonderful Places group.

Users also appreciate the news digest that allows them to share news stories with their followers. That is one of the most effective ways users can connect, as others can comment, like, and share what they’ve written.

While many users enjoy the social media elements of their profiles and find friends and dates, others join the platform to become influencers. For instance, one of TAIMI’s tools alerts users when a post is gaining traction on the platform to understand the aspects that made it popular.

“Recently, TAIMI launched #Taimiinfluencer for our users to become more involved in the social life of the platform; it has been getting a lot of positive feedback so far,” Helen said.

One TAIMI influencer named Jerry said: “TAIMI is such a fun, easy app to use when I want to connect with the people in my community. The new TAIMI app offers a pleasing experience when it comes to meeting new friends.”

Another influencer named Michael added: “TAIMI allows me to personalize my profile in a way that makes me feel well represented and confident when talking to new people. You can even add your Zodiac sign!”

TAIMI aims to connect members of the LGBTQI+ community around the world. And while it has fostered plenty of friendships, many users have also found lasting love.

Lauren, from San Antonio, Texas, shared her story of meeting her girlfriend on the platform:

“I met my partner, Fey, 30, through TAIMI. I like that it isn’t just a typical dating app, it’s more of a ‘community app.’ Fey was the second or third profile I came across. I thought she was beautiful, so I messaged her,” Lauren wrote in a testimonial. “Within 10 minutes she’d messaged me, and we’ve been in touch ever since. We found out later on that we’d downloaded TAIMI on the same day, within hours of each other. I’m so thankful for TAIMI, in fact, Fey and I are about to move in together!”

Since it launched in 2017, TAIMI has upgraded its features and interface, but it doesn’t plan to stop innovating.

In addition to improving its functionality and safety, the company wants to partner with more organizations fighting for equality for LGBTQI+ people.

“It means that we are doing our part to make this world a better place. People are social creatures, and giving all of us means to connect, communicate, and create relationships is great,” Helen said.