The Scoop: Some captains feel on top of the world when on the deck of a boat, but they’re at sea in the mainstream dating scene. Fortunately, a niche dating site for seaworthy folk can steer them in a positive direction. If you’re looking for a shipshape date, then SeaCaptainDate could be the right online dating vessel for you. SeaCaptainDate can act as a lighthouse for singles in search of a friendly port, and its fun matchmaking features can put wind in the sails of sea captains and their admirers.

The OkCupid team loves to crunch numbers in the dating scene, and sometimes its reports lead to some eye-opening insights into the human heart. For instance, in 2011, OkCupid analyzed about 35,000 matches that had formed on the site and found that one-third of those couples agreed on the question “Wouldn’t it be fun to chuck it all and go live on a sailboat?”

That’s no coincidence. Couples who sail together, stay together. At the end of the day, it’s important for people in a relationship to share similar hobbies, aspirations, and desires.

A dating site called SeaCaptainDate.com has made waves by tailoring its services to buccaneers young and old and offering a salty space where sea captains can meet like-minded companions.

Since its launch in 2011, SeaCaptainDate has become the premier (because it’s pretty much the only) dating site and app for seafaring folk.

Seeking a seaworthy date? SeaCaptainDate promises not to leave you high and dry.

The SeaCaptainDate team uses the term “sea captain” broadly to mean “pretty much anyone who enjoys boating,” and its open registration has attracted signups across the seven seas. Many sea captains, sailing enthusiasts, and water lovers have been intrigued by this dating platform, and it has begun to chart a new course in the online dating scene.

Anyone over 18 can take the plunge on SeaCaptainDate and use its engaging interface to make friends, find dates, explore unknown waters, and hopefully not encounter any sea monsters along the way.

“The earth is 70% water — there is a void in the market for women and men engaged in seafaring activities,” said a spokesperson for SeaCaptainDate.com. “We’re not for the faint of heart, but, remember, you can’t say ‘relationship’ without a ‘ship.'”

Singles often have to navigate a lot of rough weather and turbulent seas to find the safe harbor of a relationship, and that can be tiring for anyone. But it’s particularly frustrating for individuals who are accustomed to being the captain in their personal and professional lives.

Captains see the world in terms of a series of destinations and goals. They’re used to striking out and exploring unknown waters, so they typically don’t balk at trying a unique and untested dating site like SeaCaptainDate.

SeaCaptainDate allows singles to browse its profiles without registering an account, and full-fledged members can click the Message In A Bottle icon and send a message to someone online.

The free search needs very little information to plot its course — users simply identify as a man, woman, or sea captain, and then they state what type of relationship they’re after (dates, friends, pen pals, sailing partners, or casual sex) and what type of person they want (men, women, sea captains, or all of the above). Last of all, users put in their ZIP code and click search to bring up a list of potential mateys. 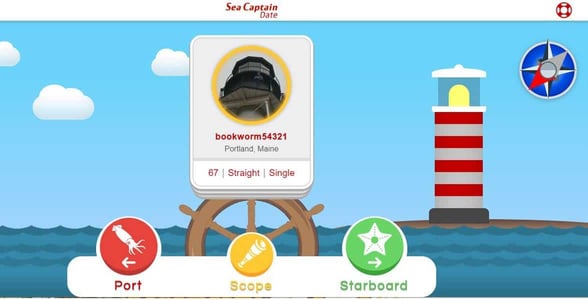 Thanks to SeaCaptainDate, all you have to do is say aye aye, and you’ll find a great catch online.

Members do not need a captain’s license to create a profile, and they don’t even have to be an experienced captain or sailor. The only requirement is a valid email address or Facebook account. That means anyone who loves the water and wants to set sail on a dating adventure can sign up to SeaCaptainDate to weigh anchor.

SeaCaptainDate members range in age from 18 to 95, and they come from all types of backgrounds. Some are literal seamen, while others treat seafaring as a leisurely activity. A majority of users are straight men seeking a siren in the online dating scene.

The website can help captains and their admirers connect while docked at home, but singles who are drifting across the dating scene may find the SeaCaptainDate app a sea-worthy companion for the journey. The app offers a simple, fun, and cartoonish interface where users swipe port and starboard (instead of left and right) on potential matches. Users can click the Scope icon to learn more about that person and what he/she is looking for online.

“I’m back in port. I need a woman,” said one 42-year-old user from Aberdeen, Scotland.

“I’m a Navy man, so you will never hear me complain,” said an Australian named Chuck. “You will always feel appreciated.”

SeaCaptainDate may seem more than a little silly on its surface, and the website certainly enjoys its nautical puns. But a deep dive into its mission and membership base reveals a lot of heart beneath the humor.

The idea of meeting a sea captain may seem far-fetched, but sea lovers can meet one another on SeaCaptainDate and plan a date on a boat, ferry, or yacht. The interface is simple and straightforward, so it shouldn’t be too rough to make port.

“It’s for sea captains,” said one user in a video. “They’re always on the move. They want to find someone who loves the ocean as much as they do.”

SeaCaptainDate is a safe harbor for sea-loving singles of all types.

“SeaCaptainDate.com is the premier destination for sea captain dating on the internet,” the site’s Founder Billy Kay said. “Over the years, we’ve been lucky to have countless captains and landsmen alike share their romantic journeys with us.”

Some singles use SeaCaptainDate to arrange one-night stands and booty calls from ports around the world. However, others go online in search of something more serious and lasting. A fair number of singles have even closed their SeaCaptainDate accounts because they’d found a sailing partner and no longer needed the site’s assistance.

Every success story buoys the SeaCaptainDate team and serves as a reminder of the good the site can do for the seafaring community.

“We are thrilled to help, making someone smile and say thanks is all we can ever ask for,” the SeaCaptainDate crew told us.

Ultimately, if there’s one thing SeaCaptainDate teaches its users, it’s that there are always more fish in the sea, so it’s worth continuing the search from sea to shining sea.

SeaCaptainDate Puts the “Ship” in “Relationship”

Many sea captains see the ocean as their first love, but seafaring can be lonely without someone special to share in the adventure. If you jump on board SeaCaptainDate.com, you have the opportunity to meet experienced and passionate seafaring folk from all over the world.

Looking to the future, SeaCaptainDate plans to keep love afloat for many generations of sea captains and help singles find their ideal first mate. Instead of tying singles to shore, SeaCaptainDate encourages them to direct their sails toward a seaworthy date and sail off into the horizon.

“We pride ourselves on being the non-corporate alternative to mainstream dating sites. We let relationships form organically,” the SeaCaptainDate spokesperson said. “If you find you are dissatisfied with cookie-cutter sites and prefer quality over quantity, give us a try.”