The Scoop: The GoGaga dating app has established itself as a relationship-driven middle ground between casual dating and arranged marriages in India. The app has appealed to 20-somethings who are interested in settling down and want to use a smart online networking system to find the right person. The GoGaga app encourages friends to act as matchmakers and make introductions in a fun swiping interface, and its intuitive AI tools have led to over 10,000 success stories in the Indian dating scene.

In 2016, Neha Kanodia took on the role of personal matchmaker and wingman for her brother Meet Kanodia. Their traditional Indian parents wanted Neha to use her social contacts and sisterly intuition to find Meet his ideal bride, so the siblings started sifting through potential prospects on matrimonial portals.

This process was slow and ineffective, so Meet decided to speed things up by swiping on matches on his own through some of India’s most popular dating apps. These apps gave him access to a lot of casual dating options, but not many serious women he felt had long-term potential. 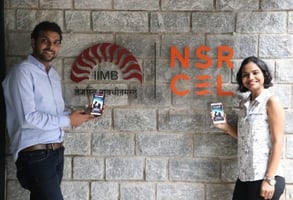 Neha and Meet created GoGaga to solve a problem they experienced in the Indian dating scene.

After both dating methods failed to help Meet fall in love, the siblings put their heads together to figure out what was missing in the Indian dating scene.

While talking through their experiences and frustrations, Neha and Meet realized that Indian’s social scene is built on trust, and no app where strangers meet each other at random could provide that sense of trust and community that would make relationships flourish.

Neha and Meet did some research in this area and found that 70% of couples in India meet through a common connection — either at school, university, workplace, or friends parties. These relationships were built on trust, and that’s what the siblings decided to bring to online dating with the launch of GoGaga.

GoGaga is a dating app that supports a growing network of matchmakers who pair their mutual friends in hopes of creating a new relationship. Its referral-driven matching system has been extremely successful at giving users date options they know are genuine.

Now Indian singles can have their friends and family members vet their date prospects and recommend the most promising matches in their social circle. That makes online dating much more engaging and adds a level of accountability that’s lacking in the casual and anonymous swiping interface.

Within 18 months of the app’s launch, GoGaga collected over 10,000 success stories from its users and demonstrated the power of referrals in the modern dating scene.

“GoGaga’s mission is to keep dating fun, trustworthy, and close to real-world dating,” the team said. “We have been experimenting with other trustworthy methods of how we can show more profiles. In 2020, we developed GoGaga 2.0 where users are shown AI-picked matches along with friends of friends.”

The App Now Curates a List of AI-Driven Matches

GoGaga became famous by matching users through their friends network, but the dating app didn’t stop there. In the last few months, the team has been focused on providing more avenues to romance for Indian singles searching for a legit partner. 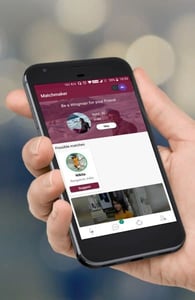 GoGaga users can receive match recommendations from friends and from the AI algorithm.

Artificial intelligence has been key to GoGaga’s latest matching feature. The app has developed an AI-driven matchmaking system that relies on user profile information to find commonalities in work, education, interests, and lifestyle. Only users who have completed their entire dating profile have access to this new feature.

The GoGaga team has identified 12 personality types based on its relationship questionnaire, and this information leads to smart matches between compatible people who may or may not have mutual friends.

A GoGaga user can access up to one curated match per hour — they have to spin a wheel of chance to earn the opportunity to view a match or get up to 40 Flames deposited in their account. Flames are the virtual currency used on GoGaga to conduct transactions within the app. Flames can also be converted to fiat currencies once a user reaches a particular threshold.

Spinning the wheel isn’t the only way to earn Flames. Users will receive 30 Flames when they get someone to join the dating app, and they’ll earn 40 Flames for every successful match they create in the app.

The GoGaga app focuses on providing quality and trustworthy love matches for singles, and that’s why it limits users to only one curated match per hour. The team reasons that singles will value each dating profile more because it takes more time, patience, and even a little luck to receive a curated match.

The GoGaga leadership team said, “With the launch of AI matches already underway, our technical team is working round the clock to add more features to help people interact with their date better. We hope to launch GoGaga 3.0 soon in the coming weeks and empower users further using the power of referrals.”

Since GoGaga has unveiled its intuitive and algorithm-based matching feature, the app has seen an uptick in the number of singles swiping, matching, and chatting online. In fact, the team told us that online dating has increased by 20% over the last few weeks, and they expect it to continue trending upward in the coming months.

Of course, GoGaga is a relationship-driven dating app, so all this matching would be meaningless if it weren’t leading to good conversations, real-life dates, and meaningful connections. While GoGaga doesn’t track its users’ dating activity, the team does see some positive indications that the matching is working for most people. 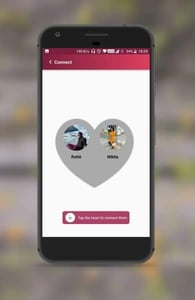 “About 31% of the matches have led to a proper conversation, which is very high compared to industry standards of single-digit percentage points,” the GoGaga team said. “Users are liking the gamification approach of displaying a profile.”

Some users have dropped the GoGaga team a note to let them know that the dating app has helped them go on dates or find suitable partners.

One user described a low-key cooking date with his GoGaga match. He led his date to believe that he was making pasta himself, but he really used Swiggy’s delivery service to bring in a professional meal and wow his date. “But unfortunately, my misplaced Swiggy’s delivery box gave it away,” the user said. “Later, she mentioned that the mutual friend had already warned her about my tricks and pranks, so she was expecting something like that.”

The GoGaga app is still relatively new to the Indian dating scene, but it has already made inroads by promoting trustworthy matches and giving singles more quality-driven date options. Looking to the future, the team is focused on combating online harassment by implementing a proactive profile screening and reporting tool that could keep unsavory characters from causing trouble on the app.

Not Even a Pandemic Can Slow GoGaga’s Momentum

In early March 2020, GoGaga busted onto the national stage when the government of Karnataka named the dating app as the winner of the Elevate Award. This honor was given to the top 100 startups bringing innovative technological change to India, and GoGaga took great pride in being counted among the movers and shakers of the tech world.

Winners of the Elevate Award will receive government support and mentoring to help foster their growth, advancement, and expansion — but that has had to be put on hold while India is in the throes of a COVID-19 lockdown. 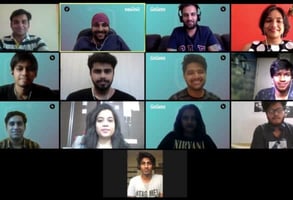 The GoGaga team is made up of youthful and energetic problem solvers.

On the bright side, the GoGaga team is more than capable of working from home and hunkering down while the pandemic runs its course. And the GoGaga app has actually gotten more attention from lonely singles who are stuck at home wishing they were in someone’s arms.

These singles want to make a deep connection without exposing themselves to the virus or taking too big a risk, so they’ve turned to the trustworthy network offered by GoGaga.

“Go-gaga-app.com has always been of the belief that people should know each other better before meeting,” the team said. “A lot of users feel more comfortable to meet friends of friends versus complete strangers in these times. Hence, they resort to GoGaga.”

GoGaga serves a young user base of 20-somethings, and the app has done its part to educate them on the importance of staying home and keeping themselves and their loved ones safe during the pandemic. Through in-app notifications, the GoGaga team has shared important coronavirus dating tips and safety guidelines for its users to keep in mind as they date in unprecedented circumstances.

In April 2020, the Indian government announced it would launch a contact tracing app called Aarogya Setu. The GoGaga team immediately got to work spreading the word about this app and encouraging its users to download and register on it.

Go-Gaga-App.com Leads the Way to a Bright Dating Future

Since its launch, GoGaga has taken a unique approach to online matchmaking by sparking connections through mutual friends. This brings greater trust to every match and turns online dating into a shared experience. With the introduction of AI matching, GoGaga has increased the number of date options it can offer users, and that has led to a dramatic increase in online activity and conversations.

Whether singles are asking their friends to play matchmaker or spinning the wheel to meet date prospects on their own, they can trust GoGaga to provide authentic and trustworthy profiles worth getting to know better.

“Over the last few years, while casual dating was picking up, the pandemic seems to have changed the way people see things. There is a lot of emphasis on trust and referrals,” the team said. “In this situation, GoGaga is well poised to benefit from the referral model we have in place.”

321Chat is a Safe Space to Meet Like-Minded Singles