AsexualCupid.com Connects Users With Other Singles Who are Looking for Emotional Partners

The Scoop: Asexuals may experience challenges in finding partners who understand their preference for a relationship without sex. That’s why they should consider turning to AsexualCupid.com. This dating site, which is available in the U.S., Canada, the U.K., and Australia, helps asexual men and women find matches who can provide companionship, emotional support, and even romance. Regardless of what singles seek, they’ll be accepted and appreciated by AsexualCupid’s members.

While many people know someone who’s part of the LGBTQ community, asexuality is less common — and perhaps even less understood.

About 1% of the population is asexual — also referred to as “Ace” — which means that a person doesn’t have sexual feelings for others. Many psychology experts believe the percentage is that low because asexuals often face pressure from family members, friends, and others to conform to social norms.

That could be a large number of people, especially when compared to the 1.6% of Americans who identify as gay or lesbian and 0.7% who identify as bisexual. Asexuals can find themselves in awkward situations when they explain on dating sites that they’re looking for a relationship without sex.

That’s why so many asexual singles turn to AsexualCupid.com, which is available in the United States, Canada, the U.K., and Australia. 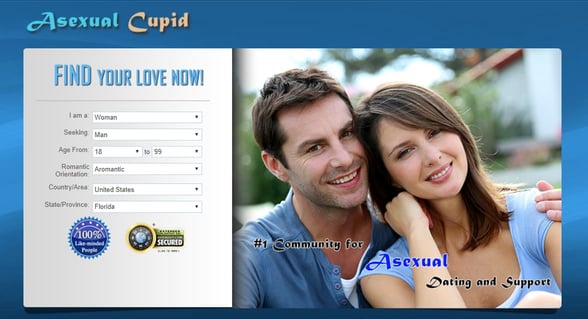 AsexualCupid.com is a platform for people who want to find non-sexual relationships.

AsexualCupid.com is all about what makes people happy. Just because its members may not be sexually attracted to others doesn’t mean they can’t make meaningful connections. According to the team, asexuality has many subidentities, many of which include people who still experience romantic attraction to others.

On the site, members don’t have to wade through profiles of people who may just want to hook up. Instead, they can start chatting with someone who wants to enjoy their company.

Offering Online Dating Options for Asexuals of All Types

One of the reasons that asexuality is often misunderstood is that, as with other sexual identities, it encompasses a wide range of behaviors and interests. Some asexual people will engage in sex to see what it’s like or because they think it might be pleasurable.

But others don’t engage in any kinds of sexual acts, and those preferences may last a lifetime — or not.

Asexuality is different than celibacy, where someone consciously chooses to refrain from sex. Celibate people have a sexual attraction to others, but they choose not to act on those desires. It’s also not related to sexual aversion disorder (SAD), which is a fear-based avoidance of sexual contact.

There is no fear of intimacy — quite often asexual people will seek out and enjoy short- and long-term relationships that include plenty of romantic connection. These can be with people of the same or different gender.

AsexualCupid.com caters to all types of asexuals, and many other types exist. The site includes definitions for those who want to learn more about the types of people they can meet on the platform.

Those types include heteroromantic, panromantic, and polyromantic asexuals, each of which has different relationship preferences.

Signing Up for the Site is Easy and Intuitive

Anyone interested in platonic dating can sign up for AsexualCupid.com, and the process is simple. Users start by creating a personalized profile, which includes a photo and short description of themselves, their passions, and their preferences. AsexualCupid.com suggests they also describe their ideal partner, so other users will know precisely what they’re looking for. Once users submit a profile, it becomes searchable, and other users can view it and connect with them.

Those users can start browsing the site, as well. They can find other asexual singles by searching and applying a few different filters. One of the most popular filters is location, and the website is available for asexual people living in the United States, Canada, Australia, and the U.K.

Singles can quickly sign up for the platform and start connecting with other asexuals.

Besides browsing for people who are closeby, users can search for connections based on their sexual orientation. That allows users to determine whether someone would return their romantic feelings, and it provides clarity on the level of emotional connection they can expect.

Finally, users can browse based on lifestyle preferences. It may not matter where an asexual partner lives or what their sexual orientation is if they don’t have anything in common with the other person. It’s important to share interests and values to truly connect platonically because that emotional connection can be the most powerful component of a lasting relationship.

If someone finds a potential partner who sparks their interest, they can send that user a wink or write them a message. That communication could be the beginning of a journey that ends with finding a new friend — or someone that turns out to be an asexual partner for life.

AsexualCupid.com Wants People to Know That Asexual Daters Have the Same Emotional Needs as Anyone Else

They can choose to have amazing, fulfilling partnerships without sex being involved. In fact, many people have found their special someone through AsexualCupid.

The dating site’s team often gets feedback from satisfied members who have found what they were looking for on the site.

“The connection we have is so strong and so surprising. I was really just hoping to make some friends, but I ended up falling in love!” — A user success story on AsexualCupid.com

“Yes, I found someone on your site,” read one online testimonial. “I obviously cannot speak to her feelings on the matter, but I am very optimistic about the whole situation, as she and I seem to have very similar interests and backgrounds. We’ll see how things go.”

Like any relationship, sometimes things start slowly, while other times they develop quickly. When things happen quickly on AsexualCupid.com, matches can be made from the first message.

“He was the first person to message me, and, after chatting back and forth for two months, we can’t wait to meet each other,” reads another success story on the site. “We live 1,000 miles apart but plan to meet in person next month. The connection we have is so strong and so surprising. I was really just hoping to make some friends, but I ended up falling in love! That is a nice plot twist.”