The Scoop: Tracey Cox is a go-to source for the answers to sex questions that people may be afraid to ask. She’s an author with an academic background in psychology and sex therapy, and she has been dispensing advice for more than 30 years. Tracey has written for top publications, including Cosmopolitan and the Daily Mail, and lent her expertise to dating shows on the BBC, HBO, and the Discovery Channel. She’s currently working on her 17th book while also selling two lines of sex toy products, for which she partnered with Lovehoney.

Tracey Cox has been comfortable talking about sex and dispensing advice since her formative years growing up in Australia. Her older sister worked in family planning, and she would discuss aspects of her job with Tracey and recommend resources to understand sex better.

“She would tell me that I had to read about certain things before I thought about having sex myself,” Tracey told us. “So, at school, I was someone who knew everything about sex, even though I had never had it. That made me feel so much less embarrassed.” 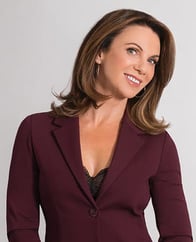 After her parents split up when she was a teenager, Tracey became interested in how sex impacted loving relationships. In college, she studied journalism, psychology, and sex therapy — topics in which she was interested, but she still wasn’t quite sure of her path.

“I veered to the journalism side. I didn’t practice as a sex therapist or a psychologist, even though I had a degree,” she said. “But that’s how I ended up writing about my favorite sexual topics — because I had an academic background in it.”

Now, 30 years later, Tracey is working on her 17th book and has written more than 400 columns for publications like the Daily Mail in the U.K. and Cosmopolitan magazine. She’s also appeared as a sex expert on television shows on the BBC, Discovery Channel, and HBO.

Tracey has branched out to help people feel comfortable exploring their sexuality. She’s an active consultant in designing two different lines of sex toys and she’s preparing to launch a radio show that will reach listeners around the globe.

“When I turned 50, I thought I wanted to calm down a bit, but now it seems to be speeding up again,” she told us. “I love to be busy, and it’s nice to be on my terms now. I’ve got lots of new content.”

Practical Sex Guides Based on the Latest Research

“My job is to look at all the research and bring it back down to a practical basis. That’s what I think has been the recipe for success in my books and my writing,” she said. 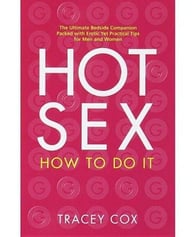 Tracey’s first book, “Hot Sex: How To Do It,” is a bestseller that has been translated into more than 20 languages.

Tracey describes her writing as down-to-earth and infused with common sense. She often details sexual strategies step-by-step, backed up by the latest academic research. That introduces the academic world into everyday practicalities.

Now, it’s available in 140 countries and in more than 20 languages.

“I’ve grown up with my readers. My new book is about women over 50 and sex, and hopefully the same people who bought my first book will buy it,” she said. “Our attitudes about sex have changed, and we’re having sex longer. All the books are practical, helpful how-to-do-it sex manuals.”

She said she knew she had found her niche with her first book when her editor’s grandmother bought it. The older woman said she wished she’d had it earlier in her marriage because her sex life would have been completely different.

“That was one of the best compliments I’ve ever received. I’ve had a massive amount of people tell me that I changed their lives,” she said. “That’s my inspiration, wanting to help people.”

Tracey provides her advice through a variety of channels, not just her popular books. She has a long-standing column in the Daily Mail and frequently appears as a sex expert on television shows in the U.S., including Oprah, CNN, and “The Today Show,” among other primetime chat shows.

“I’ve done lots of TV shows and taught people about both sex and body language. ‘Would Like To Meet’ was a U.K. TV show about people who hadn’t had a date in years, and we’d work with them over a few weeks. It was really successful,” she said.

In 2020, she plans to start a new radio show in the U.S., which will be streamed online through Jack Radio. Her scheduled Wednesday 1 p.m. to 2 p.m. time slot is perfect for a spicy midweek break.

Tracey said it’s surprisingly easy to come up with new topics about sex and relationships, even her regular blog posts.

“There are so many ideas with sex and relationships, and so many things that are universal,” she said. “Life changes bring up ideas, and I write about what I’m going through, what my friends are going through, and people who write to me.”

Tracey was educated about sex during her formative years and carried that desire to learn through college. She has been teaching others techniques and strategies for improving their sex lives for more than 30 years through books, columns, and TV appearances. Now, in addition to a radio show, she has gone even further to help her followers find pleasure.

Tracey designs and promotes two adult product lines in partnership with Lovehoney. One is called Supersex, geared toward couples or anyone who wants to have fun in the bedroom. The other is called Edge, which is geared toward men who want to improve their sexual performance.

She has more than 50 products available through her website for all kinds of titillating, sexual fun.

Tracey has two adult toy lines in partnership with Lovehoney — one for men and one for women.

“That was an interesting experience. I’ve written about sex toys for ages, and now I’m in the driver’s seat designing. It’s a learning curve with fun parties, as well,” Tracey told us.

She said that she suggests the concepts and Lovehoney takes care of the research and design.

“I was sick of sex toys that didn’t work. I wanted products with clear instructions that we know work with female or male anatomy,” Tracey explained.

Tracey said those lines are always growing, and she doesn’t plan to stop writing for her readers anytime soon. She’s excited for her new book to connect with women over 50, which is slated to hit shelves in February 2020. Topics include practical advice for navigating and negotiating the world of sex for wise, experienced women who have been there — and back.