The Scoop: Every now and then, everyone feels a little lost in life. Maybe they’re dissatisfied by their relationships, or maybe they’re at a crossroads and unsure what they want. In those moments, people need guidance from someone they trust, and Joel Sinclair, certified life and relationship coach, can be that person for singles and couples. Based in Calgary, Alberta, Joel has transformed countless lives by providing individual coaching, relationship coaching, and marriage counseling. He calls himself a transformational life and relationship coach because he focuses on the internal barriers and emotional issues that keep people from having the lives they want. Joel meets his clients face to face and via phone or video call and gives insightful pep talks to get them out of their funk and into a joyful frame of mind.

Some people just have a trustworthy vibe to them. They’re the rock family members go to in times of trouble. They’re the sounding board friends use when facing a hard decision. Joel Sinclair is that type of person.

Joel Sinclair is a certified relationship coach who specializes in working with singles and couples.

Growing up, he noticed a lot of people gravitated toward him for advice, and he felt gratified when he was able to help them solve their personal problems. When he started thinking about what he wanted to do for a career, helping people was high on his priority list.

He worked with prison inmates at the Calgary Young Offender Centre. He worked with at-risk high schoolers in a mentorship program. He volunteered on the board of the Alberta Society of Artists. Eventually, he found his life’s calling when he earned his certification as a professional life and relationship coach.

“I believe in helping others and making myself available to them,” Joel said on his website. “I’ve always coached and counselled people, but didn’t realize that’s what I was doing until I was introduced to the world of coaching.”

Joel offers personalized coaching for women, men, and couples who are seeking help with their sex lives, dating, or marital separation. His coaching clients run the gamut, but they all come to him because they’re ready to make a change in their lives, particularly their love lives.

Taking on a dating coach is a big decision, and it can be an expensive one, too. Singles and couples don’t want to spend their money on a coach unless they’re sure that person can help them. Confident he can win them over, Joel offers a complimentary 30-minute consultation to prove his value to new clients.

This no-obligation session allows singles and couples to get a feel for Joel’s down-to-earth coaching style and decide if he’s worth investing in over the long term. Joel uses that half an hour to get to know his prospective clients and paint a picture of what he can do for them. 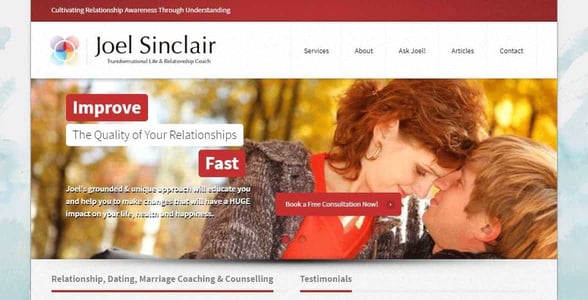 Joel Sinclair opens a dialogue with singles and couples in person, over video calls, and online.

Joel’s face-to-face coaching sessions typically take place in his studio in downtown Calgary. He can also meet clients at a coffee shop or their homes. He wants his clients to feel safe and comfortable, so he offers flexibility for individuals and couples setting up an appointment.

Of course, not everyone feels comfortable going in person and opening their hearts to a perfect stranger. That’s why Joel offers online coaching via Skype or FaceTime. He doesn’t require clients to use video. He’s also willing to do a coaching session via MSN messenger if clients prefer that.

The free Ask Joel tool allows singles and couples to anonymously ask him a question and receive a detailed written response. This makes his coaching accessible to anyone with an internet connection. People have posted asking Joel for his advice on a variety of personal issues, including age-gap dating, breakups, and dissatisfying sex.

“In the end, your own actions (whatever they may be) should NOT be born out of your sense of loss and a fear of being alone,” Joel said to someone dealing with a painful breakup, “but should be sourced out of love — not only for him, but for yourself.”

Joel distinguishes his transformational coaching style from the typical transactional coaching by saying it’s more about “being” than “doing.” Transactional coaching focuses on meeting goals, taking actions, and getting something tangible out of coaching sessions. Joel, on the other hand, chooses to focus on the intangible goals and emotional hurdles that motivate how people behave, feel, and think.

As a transformational coach, Joel seeks to change his clients from the inside out. Instead of telling them to alter their actions, he challenges them to transform themselves, reset their expectations, and see their lives from a new, positive perspective.

“I believe in helping others and making myself available to them.” — Joel Sinclair, life and relationship coach

To use the words of his website, “With transformational coaching, you discover that you are a powerful and accomplished being who can solve any problem or tackle any issue that you see in your life.”

Joel calls himself a solution-focused coach because he excels at getting to the heart of an issue, offering instrumental guidance, and setting people up for a bright future. His goal is to shift his clients into a new way of being so they can live a life centered around positivity and openness. Through weeks of supportive coaching sessions, he points out the joys and  possibilities available to anyone who chooses to become the best version of themselves.

Positive Testimonials Speak to His Success

Highlighting the words of real people can be a convincing way to establish one’s credibility as a dating expert, life coach, or inspirational figure. Dating coaches often rely on testimonials to help them show potential clients what they can do.

Former clients can offer wonderfully genuine commentary on what it was like to work with a particular dating coach and how their lives changed because of their influence. Joel Sinclair has received some kind words from former clients who strongly encourage people to give his coaching services a try.

“Joel helped me identify the things that really matter to move forward,” said M.J., a client from Calgary, Alberta. “Though the time we spent together was limited and over a relatively short period of time, the value was immeasurable.”

“Not only was my relationship saved, but I also now have a better idea of who I am and what I want.” — R.W., a former client

Another client named S.W. echoed this statement, citing Joel’s “unassuming approach” as the key that helped clarify what was important and how to move forward.

“Joel is the true expert in relationships!” said an enthusiastic A.B., who turned to Joel because she was having issues with the men she was dating. “He helped me significantly improve by giving specific instructions and examples on how to understand and effectively communicate with men. I was surprised to find out how quickly my relationship improved.”

“I would recommend Joel as a personal, life, and business coach to anyone [who is] struggling,” said M.H. in a testimonial.

Over the past eight years, Joel has developed his skills as a relationship coach by working with singles and couples from all walks of life. He relies on years of training as well as his own instincts to counsel his clients through some of their toughest trials.

Joel’s positive outlook on life often draws people to him. He seems to have it all worked out, and he’s eager to share the secrets to his personal and professional success. After having a heart-to-heart conversation with Joel, some of his clients learn to see their lives and relationships in a new light, and they realize that the power to change their lives has been inside them all along.

According to the website, “His unique approach to coaching and relationships will not only educate you for life, but assist you in having the relationships you dream of — and the life that you were meant to live.”