The Scoop: Technology has created many unique challenges for modern parents. When do you give a child their own phone? How do you monitor or limit their screen time? When should they have their own social media profiles? What can you do to keep your child safe? In 2016, one filmmaker and mother released a documentary to start a national discussion about these pressing issues. Delaney Ruston’s “Screenagers” shows how technology impacts teenagers at home, in the classroom, and in the dating scene, then she offers practical tips to encourage responsible usage.

When a childhood infatuation escalated out of her control, a teenage girl felt she had to keep a terrible secret from her mother. She had texted a photo of herself in a bra to a boy, and he had shared the pic with her classmates. The girl was naturally mortified and uncertain of what to do, but she didn’t feel comfortable turning to the adults in her life for guidance.

She worried that her mother would punish her by taking away her phone, which is a social lifeline to today’s teenagers. Even though it had gotten her into trouble, the teenager couldn’t bear to let go of her phone, so she bore her pain in silence for months. Finally, she opened up about what had happened to her and discovered a support system.

This is just one of the stories told in “Screenagers,” a documentary about how smartphone usage can affect developing minds.

The idea for “Screenagers,” which was released in 2016, began with a family argument. Filmmaker and mother Delaney Ruston disagreed with her husband about when it was appropriate to buy a smartphone for their two children. They experienced firsthand the challenges and uncertainty faced by parents in the age of technology.

“I was worried about what they would be exposed to — and that they wouldn’t be able to turn off on their own,” Delaney said. “Smartphone technology is making parenting a huge new task, and I believe that’s important to study.”

“Screenagers” not only studies teen technology habits, but it also offers practical solutions for parents and teens to moderate screen time and stem the addiction to texting, swiping, gaming, and posting. The documentary navigates a complex social issue without placing blame, and its educational content empowers viewers to change their habits and create a healthier, balanced future for themselves and their families.

A Data-Driven Approach to Modern Issues With Technology

Delaney began investigating what it’s like to grow up in the digital age over six years ago when she saw the beginnings of the technology tsunami headed toward families. When she learned that the average kid spends 6.5 hours a day looking at screens, she knew she had to take action, so she decided to produce an educational film called “Screenagers.”

While making “Screenagers,” Delaney did her own research, talked to experts in childhood development, and asked parents and children for their input. The more personal stories she heard, the more passionate she became about getting a positive and proactive message out to families everywhere.

Delaney’s film prompts parents and their children to communicate openly with one another and come to an agreement about how much screen time is safe and appropriate. She emphasized that setting rules without discussion or explanation can be harmful to the parent-child relationship.

“Teenagers are always going to have drama,” she said. “Our goal as parents is to have our children come to us when they’re in trouble. If we overly punish, then they’re not going to come to us in the future, and that’s a huge disservice to our children.”

“Screenagers” sheds light on how excessive screen time can hamper a child’s development and social skills.

“Screenagers” sets forth a science-based narrative about how trends in technology impact child development, impressing upon viewers the need for boundaries. The film promotes strategies to handle video game addiction, sexting, short attention spans, and other issues that arise when a child is always online.

“First and foremost, ‘Screenagers’ is about helping parents find solutions for parenting around screen time,” Delaney said. “That’s the most challenging thing we do as parents.”

Anyone Can Find or Host a Screening in Their Area

“Screenagers” is only available for public screenings. It’s not available online. Delaney has done this as a conscious choice to support getting people off their phones and laptops and into a face-to-face community setting. She wants her film to motivate people to come together, and she sees the screenings as a perfect forum to elicit honest conversations about technology. 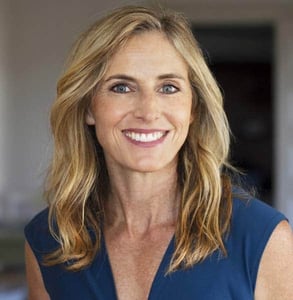 So far, over 3 million people have seen “Screenagers” in screenings at schools, churches, independent theaters, community centers, and public events. Dozens of private screenings are already on the calendar for 2019. You can find an upcoming screening here. Plus, anyone can volunteer to host a screening. You can call (415) 450-9585 for more details.

“To reach so many people has been incredibly rewarding,” Delaney told us. “The documentary came from my own personal struggle, and I’ve been able to find healing and meaning in the challenges I’ve faced.”

By prompting thoughtful discussions, “Screenagers” has positively influenced many families throughout the U.S. Delaney set out to find answers for herself, and she has ended up creating a guiding light for parents and teenagers facing similar struggles.

“It’s about helping the next generation find balance in the technology age,” she said. “The power of film can help people see things in a new light and take action.”

Delaney is on a mission to provide families and educators with data-driven resources that raise awareness about the high-tech challenges facing today’s youth and offer practical solutions based on years of study.

By educating the public, the “Screenagers” platform inspires parents and children to talk to one another about how they want to handle screen time and improve the quality of their lives. Delaney furthers that discussion every week in Tech Talk Tuesdays, an informative and down-to-earth blog. 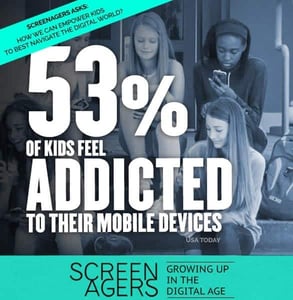 “Screenagers” equips parents with the knowledge and tools they need to guide their children in the digital age.

Individuals can subscribe to Tech Talk Tuesdays by submitting an email address on the “Screenagers” site. Delaney said she has collected over 100,000 signups to date and hopes to see that number continue to grow over time.

Delaney brings her experiences as a parent to the table in articles designed to start a conversation between digital families. She uses anecdotal evidence as well as scientific research, psychological studies, and statistics to help readers deal with everything from online bullying to online pornography.

In a thoughtful article about sexting, Delaney encourages parents to ask their children to consider the potentially traumatic consequences of sending a nude or revealing picture to a crush. The article doesn’t judge teens for exploring their sexuality, but rather it recommends strategies to keep them from going too far and putting themselves in a vulnerable position.

“I wanted to shift the thinking toward how to make this challenge something we can learn from,” she said. “Kids, teens, and parents can relate to these stories, and the whole family can discuss these issues.”

Modern technology can seduce young minds into making mistakes and limiting their potential — all for the thrill of instant gratification — and that’s a danger many parents struggle to circumvent. Some set strict rules that lead children to rebel and keep secrets, while others give their children unlimited screen time and foster addictive habits.

Delaney argues that there has to be a healthy balance between these two parenting styles. Her documentary makes a case for setting reasonable limits and discussing your rationale with children and teenagers so they understand why it’s important to turn off their phones and laptops.

Attending or hosting a “Screenagers” screening can lead families to talk about how to use smartphones, social media, video games, and other technology responsibly. These conversations can effectively prevent issues by empowering teenagers to make the right choice when faced with sexting, online bullying, and other issues unique to this generation.

“We need to make sure we put limits around excessive screen time,” Delaney said. “In this revolution of technology, it’s paramount we have a revolution in how we teach and parent young people.”