The Scoop: MissUA, a dating and marriage agency based in the Ukraine, was founded to bring Western men and Eastern women together through a process of authenticity, respect, and hope. That process is also part of the reason MissUA has been responsible for more than 300 marriages over the last 15 years.

Decades ago, the idea of international dating often brought to mind the concept of the mail-order bride. However, as near-instant communication technology has made the world smaller, allowing more people to work remotely, the idea of dating internationally is very different today.

Anna Zvarich noticed that shift early on, which is why she founded the Kiev, Ukraine-based dating and marriage agency MissUA more than 15 years ago.

MissUA was founded to foster international love that leads to marriage.

“I wanted to provide a different kind of service to prove that it’s possible to find love through an agency,” she said. “I understand all of the different mentalities, and I’ve traveled around the world. My husband is a foreigner as well, so this was something straightforward and very intuitive to me.”

Anna’s vision was to create a system that allowed clients to make real connections quickly and easily. MissUA has played a role in more than 300 marriages since it was founded, and, as international dating continues to evolve along with technology, the agency strives to be a part of many more.

“If people want to have family and kids and they have similar values in life, then why should it matter that they’re in different countries?” Anna said. “American and European men come to us because we focus on family traditions and values. It’s so much easier today because people are becoming more and more similar.”

Anna works with many different types of people, including those who may be disappointed with the dating scene or who have recently been through a divorce.

“They often come to an agency when they feel bad or even frustrated. Many of them had a wife or husband, and they come to us for a chance to feel alive again,” she said. “Sometimes, my job is to talk with the person and give them emotional help to recover. When you start comparing people or try to replace one person with another, it will not bring happiness into your life.”

When a client is ready to meet someone and develop a new relationship, MissUA provides many different services to help. Most importantly, men are introduced to beautiful women living in Kiev who are members of the agency. They can also use mail forwarding services, so they can rest assured that every letter sent to a love interest is received.

In the early stages of a relationship, the MissUA team will translate messages between men and women if they don’t speak the same language. The team also offers English lessons for women if they wish to communicate directly with men.

The dating agency can send flowers and gifts on behalf of clients to show interest, arrange romantic tours, and help men rent apartments in Ukraine to visit a woman to see if there’s a love connection.

Men Travel to Meet Women, Not the Other Way Around

Anna said that she works with plenty of men who may not understand the ins and outs of international dating. The first suggestion she often makes is for the man to travel to meet the woman as soon as possible instead of spending months writing back and forth.

“When people are writing too many letters early on, both can be waiting for a reply for a long time,” she said. “Then, when they meet in the real world, there’s no chemistry. But when you meet in person early on and see the other person’s eyes and smile, you often know right away.” 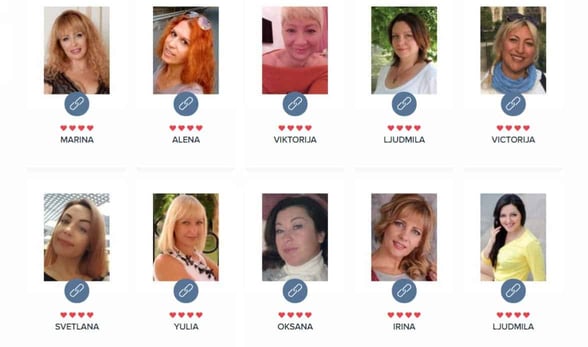 Men can find beautiful Ukrainian women by browsing their profiles on the MissUA website.

Anna’s goal is to make those meetings a reality, and she doesn’t want clients to waste six months or more on correspondence. That’s why she recommends that men travel to Kiev and meet as many ladies as possible. Then they narrow down their interest and energy to one or two women.

While some men want the women to travel to meet them in the United States, Anna discourages that.

“Men should come to ladies, not the other way around. Many men say they’ll pay for the flights and all the fees for the ladies to come to their country, but I always say no,” she said. “In our culture, it is not good for a woman to come to a man. It’s stressful in another country, and she may not know anything about it. She may not speak English and be completely dependent on the man. It can be a disaster if they don’t have a spark or anything to talk about.”

As technology has seemingly made the world smaller, international dating has become more common. However, while this particular dating scene has changed, some of the misconceptions remain, which is why Anna takes extra care to make the women with whom she works feel more comfortable and respected.

“They’re human beings, and the first meeting should be in the country in which she’s comfortable,” she said. “She’ll be more relaxed and open, and that gives the man a better chance to win her heart.”

“I see more American men moving to the Ukraine, and many of those men, whether they’re employed by a company or own one, work remotely. That scenario is becoming much more popular.” — Anna Zvarich, Founder of MissUA

Another misconception is that women who are involved with MissUA just want to move to America. As more companies allow their employees to work remotely, Anna said she often sees the opposite happen.

“I see more American men moving to live in the Ukraine, and many of those men, whether they’re employed by a company or own one, work remotely,” she told us. “That scenario is becoming much more popular as many men like to live here — and find love here.”