The Scoop: Learn French With Alexa has beginner-friendly and advanced coursework that encourages people to master a foreign language while having fun. The video lessons have become phenomenally popular on YouTube — the channel has over 1 million subscribers and counting — and the online course can bring decades of French teaching experience to your screen. Learn French With Alexa can be a great resource for intercultural couples who want to grow together in their relationship and build a common understanding. DatingNews.com readers can get a discount by using the code: BONJOUR10.

French is widely known as the language of love. Perhaps it’s the smooth way the words flow off the tongue with those classic rounded vowels, rolling rs, and soft consonants. Or it could have something to do with the beautiful countryside, the decadent food, or the loving people. Maybe it’s a combination of all of the above.

Whatever the reason, French has an undeniable appeal among young lovers and old sweethearts dreaming of romance. Sometimes learning French can be a wonderful gesture of love, particularly for couples who are in intercultural relationships where one person is French and the other isn’t.

Learn French With Alexa (LFWA) offers online courses that can support individuals who want to work on their French language skills. The lessons give students of all ages the grammar tips and cultural cues they need to reach goals in their personal and professional lives.

Alexa is a longtime teacher turned YouTube educator (aka EduTuber). She started teaching French to children in the 1990s, and now she brings her straightforward lessons to adults. LFWA has a variety of online coursework and video lessons that convey important language skills in a conversational and beginner-friendly tone.

In 2020, Learn French With Alexa surpassed 1 million YouTube subscribers. The education company also has over 100,000 subscribers who pay for special content and live coaching sessions.

“I have been teaching for nearly 30 years, and if you had told me even 10 years ago that I would have millions of followers throughout the world learning French with me, I would have never believed you,” Alexa told us. “It was never my intention. I was just happy sharing my passion for French.”

Learn French With Alexa has reached an international audience that includes people of all ages and backgrounds. One listener may be an American planning a trip abroad, while another is an Indian seeking employment in Canada. No matter what their reason for learning French, the simple coursework gives them the tools to become more adept speakers and listeners.

“In terms of relationships, we see people who have just married a French woman or a French man and have to adapt to the culture,” Alexa said. “Maybe their in-laws speak French, and they want to impress them or connect with them.”

The LFWA has outlined step-by-step coursework that makes learning a new language as easy on the user as possible. Alexa said it’s similar to following a recipe because you move logically from one task to the next and build on your knowledge as you go.

A person who follows the LFWA lesson plan from start to finish will gain language skills that are essential in everyday French conversations.

Throughout LFWA’s growth, Alexa has retained her passion for teaching in person. She continues to engage in live lessons as a way of connecting with French students and learning what they need to work on and how the lesson modules can improve.

LFWA has taken Alexa’s hands-on teaching methods to the digital world and made the French language more accessible to all types of people.

Alexa compared teaching to a performance and noted that it’s important for her to keep her audience’s attention and find ways to engage their imaginations. Her goal is to educate and entertain simultaneously, so people will listen and remember the lesson.

“We touch a lot of lives,” Alexa said. “The lessons are not delivered through software. It’s true contact with a teacher who is approachable and makes mistakes sometimes. I think that makes it easier for people to relate to the lessons.”

Over the years, LFWA has supported people in a variety of language goals. Not every student is looking to become fluent in French. Some just want enough to get by on a romantic trip to Paris, and others are focused on passing a French exam. Learn French can be a relationship-building activity as well.

Nancy Olaoye, who works on the marketing team for LFWA, told us her best student is actually her husband. “He is Nigerian and wants to learn French so we can speak French together,” she explained. “The language is a big part of my life, and so is he.”

The LFWA method has proven efficient at getting students where they want to be and empowering them to expand their social and professional circles. 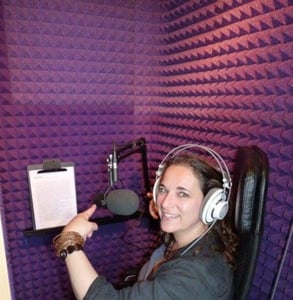 Alexa has turned her podcast into a world-famous educational brand.

After following Learn French With Alexa’s courses for a few months, a British man named Ken Phillips said he had made good progress and felt more confident in his French skills. “Really appreciate the work Alexa and the team do,” he said. “Alexa has a great on-screen persona, which makes the sessions easy to engage with and never a chore. Keep up the good work!”

“I love the personal touch,” said Joe S., who took LFWA lessons from his home in the U.K. “I feel that Alexa is in my kitchen delivering a one-to-one tutorial!”

Alexa said she occasionally receives messages from students who tell her about their lives and their journey to learn French. One time, an email was so heartfelt and powerful that Alexa drove four hours to meet one of her biggest fans at a coffee shop.

Eli’s caregiver reached out to Alexa to tell her about how her videos had touched the life of the handicapped teenager. Eli, who is confined to a wheelchair and unable to speak except through a synthetic voice, learned French through LFWA videos and found a lot of joy in the lessons. During their meeting, Alexa asked Eli questions about French, and he typed the answers with one finger on an iPad keyboard. Every answer was exactly right.

“I wanted to hug him and tell him how proud I am of him,” Alexa said. “It was the most humbling experience of my life.”

Alexa is the person who is in front of the camera, and it’s her name on the website, but Learn French With Alexa is not a one-woman show. She has a dedicated and passionate team behind her producing content and coming up with new lesson plans for people of all skill levels.

“The success of LFWA is mainly owing to a very clever bunch of people working behind the scene,” Alexa said. “We are really on a roll here.”

Learn French With Alexa offers students a flexible and personable platform where they can pick up the basics and expand their knowledge. The team has curated different courses to suit a variety of needs and goals.

For example, the coursework includes reading exercises based on French culture, so a lesson may feature Boris Vian or Le pont du Gard. That way, foreign students can learn about the artists and icons that are well-known by native French people. It’s a great way for someone who is in a relationship with a French person to pick up some engaging conversation topics and show an interest in their partner’s culture. 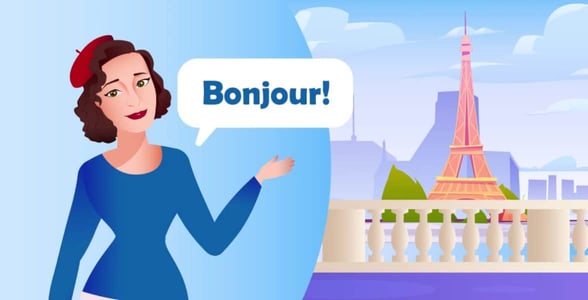 Learn French With Alexa offers an engaging way to connect with a new world.

Subscribers to Learn French With Alexa have the benefit of meeting with Alexa every two weeks for a live coaching session. These sessions allow students to ask questions and get insights from a French educator with nearly 30 years of teaching experience behind her.

Right now, the LFWA team is focused on adding official exam preparation courses to the learning library. Many people are interested in relocating to Canada or France, and they will need to take an exam to show competency in the French language if they want to qualify for citizenship.

“It can be very important for intercultural couples,” Alexa noted. “The exam is the key to having a French nationality and being able to move to France with their French husband or wife.”

Learn French With Alexa Opens a World of Possibilities

Whether it’s the language, the food, or the people, there is just something undeniably attractive and romantic about French culture. International travelers visit France to make beautiful memories with their loved ones, and it’s a dream destination for honeymooners, retirees, and couples of all types.

Learn French With Alexa can support English speakers in their travel ambitions by giving them lessons in the French language and culture. This educational resource has helped millions of subscribers build a foundation of understanding that can reinforce a new career, a new relationship, or a new life in a foreign country.

Alexa said that her biggest dream for LFWA is to create an educational system that will outlast her and continue passing on knowledge and insights for generations to come.

“My ultimate goal is to leave a legacy,” Alexa told us. “Ultimately, I would like people in 40 years to still be able to learn French with me through my videos.”