The Scoop: Relationship and breakup coach Donna Barnes has 30 years of personal experience to back up her dating insights. She didn’t plan on becoming a certified life coach when she moved to New York City, but her down-to-earth perspective and straight-to-the-point advice earned her a stellar reputation in the dating industry. Now the “Queen of Sound Bites” is focused on building her online audience on her YouTube channel and social media.

In the 1980s, 18-year-old Donna Barnes moved from Philadelphia to New York City with dreams of hitting it big. She lived in Manhattan and found work as a catalog model. She became well-known among local model/actresses, and she navigated the social and dating scene with easy confidence.

Then, at age 30, Donna had her heart broken. She had never felt such profound sadness over a rejection before then, and she said that experience gave her a lot of compassion for singles recovering from breakups and going through heartaches. 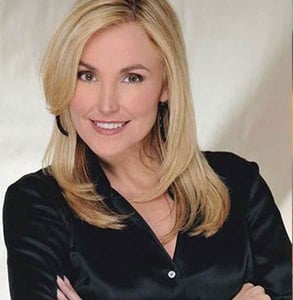 Donna Barnes gained authority in the dating scene after 30 years of living as a single woman in New York City.

“I understood dating differently after that. It set me on my journey,” she told us. “I started reading everything I could get my hands on because it was the only thing that made me feel better — I had to figure out what had happened.”

Ultimately, Donna decided to just be single for a while and focus on her career.

In the early 2000s, a friend introduced her to a producer who was making a documentary about several single and successful women in New York City. She agreed to be part of the project, which aired on Sky UK as “The Real Sex in the City,” and then Metro TV picked up the eight-part series and called it “To Live and Date in New York.” We TV later aired it as “Single in the City.”

The success of this series opened doors for Donna. She landed a gig as a co-host on a local talk show focused on relationship topics, and she spent 205 episodes giving her opinions and advice. A promotional poster for the show branded her as a “dating expert” for the first time, and Donna embraced the title. She enrolled in classes at NYU to become a certified life coach and began working on a book.

In 2007, Donna took on her first coaching clients, and she has been helping people navigate the dating scene ever since.

“It was a serendipitous journey to becoming a relationship coach,” she said reflectively. “What makes me unique is that I don’t just have book knowledge. I have almost 30 years of being single in New York having my own experience and hearing my friends’ experiences.”

Donna told us her acting experience has helped her excel at creating conversational and attention-grabbing videos geared toward singles and couples. She began her YouTube channel in 2011 with modest aspirations but found many people leaving comments asking for more content and wondering why she didn’t have a bigger following. Donna saw an opportunity to grow her audience and her client base, and she threw herself into it. Her channel now has over 376,000 views.

Each video on Donna’s channel covers a particular dating topic — ranging from dating rules to conflict resolution — and offers succinct solutions based on 30 years of dating and 11 years of dating coaching experience.

Donna isn’t yet an expert on social media marketing and online channel optimization, but she’s getting there. She is currently educating herself on how the medium can work to her advantage as a life and relationship coach. Some of her most popular videos have over 1,000 views, and her channel currently has 3,600 subscribers — and it’s still growing.

“It’s still a work in progress, but it’s getting bigger,” Donna said. “Right now I’m investigating doing group chats on my YouTube channel because I think it’d be really helpful to get people talking about dating and giving each other guidance.”

Donna currently facilitates an active dialogue in the comments section of her videos and in her advice blog, but she has her sights set on fostering a real-time conversation among her online audience in the future. Through her YouTube channel, she plans to set up weekly group chats where singles can commiserate with one another and inspire one another.

Over the last few years, Donna has made an impact on the dating scene one conversation at a time. Her work with coaching clients has helped her choose topics that are relevant to the modern dater. In videos lasting no longer than five minutes. Donna sums up the dating and relationship lesson gleaned from her personal experiences and professional knowledge.

Her Pragmatic Voice Cuts Through the Noise

As a life coach, relationship coach, and breakup coach, Donna sees people of all ages and backgrounds. She said her youngest client was a 15-year-old girl whose single father reached out to Donna because he didn’t know how to talk to his daughter about dating and sex.

On the other end of the spectrum, Donna’s oldest client was a 70-year-old woman whose husband had passed away years ago. The widow wanted to meet a new partner but didn’t know how. Donna recommended going to a bar to have dinner because a lot of older single men don’t want to cook for themselves so they’ll have a quiet meal at the bar of a nice restaurant. The first time the woman tried this, she ended up meeting a man.

Some of Donna’s clients have been single for a while and want to get out of their rut, while other clients are recently divorced and don’t know how to adapt to a dating scene now littered with sites and apps. Donna also specializes in breakup recovery and helping clients heal and move forward with their lives after a relationship is over. She’s not afraid to tell her clients the truth, and that’s something that many singles need to break through the echo chamber of quick tips on the web.

“Quite frankly, the truth is there’s no guaranteed way to get your ex back,” Donna said. “People do what they want to do. If your ex wants to come back, that’s the only way they’ll come back.” 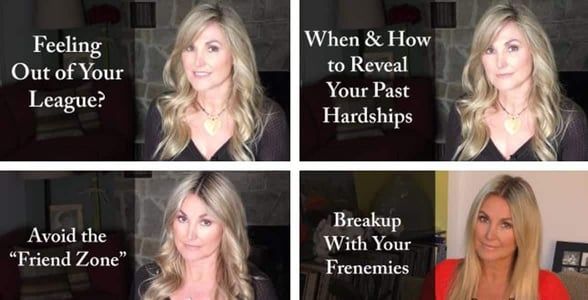 Donna’s YouTube channel and blog get to the heart of a variety of dating and relationship topics.

In Donna’s private coaching practice, she helps her clients get out of their own way so they can get in a relationship. She told us the story about one single man who was adamant that he couldn’t date a woman who was religious. He was culturally Jewish but didn’t follow organized religion, and he wanted a partner to be on the same page on this issue.

Donna encouraged him to make an exception and give all women a chance. “Long story short, he ended up marrying a Catholic,” she said. “He’s crazy about her. They seem happy. I haven’t heard from him in awhile, and, if I don’t hear from my clients, it’s usually because they’re happy.”

Another man told Donna his biggest dating obstacle was his height. According to him, women weren’t attracted to him because he was only 5’4. The dating coach shook her head and spent several sessions telling him it was all in his head, and women were repelled by his negative attitude, not his height.

Donna empowers her clients to confidently pursue the love life they want.

The message sunk in when he told her about a date that he’d thought hadn’t gone well, but Donna begged to differ. She saw signs that the woman was interested in him. Donna pushed him to give her a call despite his pessimism, and the woman ended up sleeping with him on their next date. After that, the single man behaved more confidently with women and found his dating prospects dramatically improved.

“He didn’t think she liked him, but that was his own insecurities talking,” Donna said. “That’s one of my favorite stories because you are what you think you are. You have to stop making decisions for other people. Don’t decide what someone else thinks about you. Just be who you are and be confident.”

Donna worked on her first self-help book for years before feeling satisfied that she’d hit the right tone and said what she felt needed to be said. She published “Giving Up Junk-Food Relationships: Recipes for Healthy Choices” in 2012. The book offers a lighthearted take on maintaining a healthy relationship. Throughout the book, she cleverly compares positive dating habits to going on a diet. In this case, you’re not cutting out breads and cheese, though; you’re cutting out bad influences and cheesy daters. 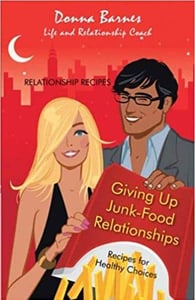 “It’s incredibly well-written,” said Dany M Bouchedid in an Amazon review. “The food metaphors are an absolutely brilliant way of explaining very complex psychological concepts. This book should be required reading before anyone enters into a relationship.”

Another reader said the book’s insights motivated him to turn his love life around. “Ingenious that the author applies humor with intellect allowing us to laugh at ourselves,” Keno said. “At the same time, it drives the point home that you need to learn and apply. A must read!”

Donna wrote “Giving Up Junk-Food Relationships” under the umbrella title of “Relationship Recipes,” which left the door open to turning the book into a series. The dating coach said she intends to write more self-help books to guide singles in need of a wake-up call in the dating scene. “It’s on the to-do list,” she said. “I’d very much like to write at least one follow-up book.”

When Donna first started dating, she assumed it would be easy to find love and get married. As she grew up and gained experience in the dating scene, however, she realized that a lasting relationship doesn’t “just happen” — she had to make it happen. Donna committed herself to mastering the art of relationship-building, and she now has a flourishing coaching career and a dedicated boyfriend to show for it.

Today, Donna offers straightforward insights to singles and couples facing challenges in their personal lives. Her compassionate and conversational coaching style has inspired many clients, viewers, and readers to reassess their dating habits and recognize the mistakes they’ve made in the past.

“Whether it’s through coaching or YouTube, my primary focus is always helping my clients grow and become the best version of themselves,” she said. “It’s really rewarding to look back and feel like all of my mistakes were worth it because I’ve prevented a lot of people from making the same mistakes.”