The Scoop: The Professional Bowlers Association fosters a growing membership base of over 3,000 bowling enthusiasts around the world. The organization’s year-round tournaments bring professionals and fans to the same bowling alley to cheer, compete, and mingle. Some regular attendees, like Monica and Shane Johnson, form great friendships and relationships during these lively events. The thrilling, competitive, and upbeat atmosphere appeals to people who love bowling and want to become part of a unique, welcoming community.

Monica and Shane Johnson have a unique love story because they didn’t meet in school, online, or at a bar. They met at a bowling alley. 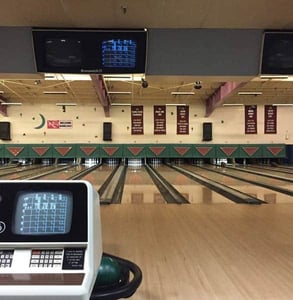 Now closed, Taylor Lanes was once a hot spot for bowlers in Taylor, Michigan.

Years ago, Monica and Shane hit it off while working together at Taylor Lanes in Taylor, Michigan. They bonded over a shared interest in bowling and decided never to split.

The couple had both their wedding shower and baby shower at Taylor Lanes, and, when it came time to name their baby girl, they chose to call her Taylor Layne as a tribute to where their relationship began.

“It started as a joke, but it actually really fits,” Monica told us, “and Taylor likes her name because there’s a story behind it.”

Now, as parents with full-time jobs, Monica and Shane don’t have a lot of time for themselves and their hobbies (Taylor’s dance classes have replaced bowling leagues on the Johnson calendar), but they still make time to attend Professional Bowlers Association events throughout the U.S.

The Michigan-based couple frequently go out of their way to see PBA tournaments, cheer on the pros, and reconnect with their friends in the organization. Bowling has been an important linchpin in their relationship, and the PBA has given them access to a community of folks who love the sport as much as they do.

“At first, it was just something to do, but it became a whole family thing,” Monica said. “It’s our whole life now.”

Bowling has been more than just a fun activity for the Johnson family — it’s been the central focus of their social calendars. They plan entire vacations around PBA tournaments. Monica said they’ve traveled to 14 states to watch the pros play one another.

“It’s funny because, when we first started traveling to watch the guys bowl, a lot of them would do a double take when they saw us,” Monica explained. “After awhile they just got so used to seeing us that it didn’t surprise them anymore.”

Monica and Shane have a particularly good time staying in Las Vegas for the big tournaments, but qualifying events in Ohio, Connecticut, and neighboring states are worth the mileage for them as well. When traveling to another city, they’ll usually stay with people they know in the PBA.

Over the years, Monica and Shane have made great friends at PBA events. They count many pros, including Dave Wodka, Dick Allen, and Jason Couch, as close friends. When bowling tournaments come to Detroit, the Johnsons host some of the players at their house, and they have worked behind-the-scenes to help with these local events.

Whether they’re acting as scorekeepers or just watching the action as fans, Monica and Shane enjoy the enthusiastic and jocular atmosphere at PBA events. It’s exciting for them to be so close to the action. They often trade tips and exchange jokes with some of the best-known pros in the sport.

“The amount of friends we’ve made thanks to the PBA is unreal,” Monica said. “It’s just a great organization promoting a great sport.”

The Organization Has Over 3,000 Members in 30 Countries

The PBA has over 3,000 members worldwide, yet it fosters a neighborly feeling at its bowling tournaments and events. The 2019 Go Bowling! PBA Tour Schedule featured televised playoffs and non-televised rounds in Texas, Ohio, Michigan, Maine, Nevada, and other parts of the country.

One of the most enjoyable aspects of a PBA tournament is that there’s very little separation between the players and the fans. You’re not sitting way back in a stadium seat. You’re not off to the side and craning your head for a good view. You’re right behind the bowlers and close enough to hear their celebratory cries and strategizing conversations.

“It’s a unique experience,” Monica told us. “You’re actually able to interact with the players and say ‘hi’ to them. You don’t get that in any other sport.” 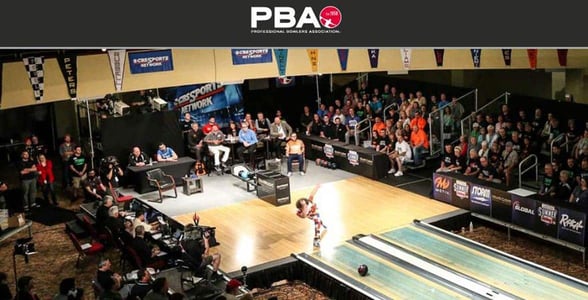 The PBA draws large crowds during its televised pro tournaments.

Monica has been a fan of the PBA for years. She got to know many professional bowlers by regularly attending PBA events, and she said many of her closest friendships began at bowling alleys across the country.

She characterized the PBA as a big family, one where everyone knows each other and keeps in touch. A family that looks forward to the tournaments when they can hold an informal reunion at the bowling alley.

The PBA Tour Twitter account sees a lot of love from the fans. It has over 50,000 followers who enjoy staying up to date with everything going on in the community. While other corners of the internet are swamped with hate and trolls, the PBA fosters a space of goodwill and encouragement.

“I wish we got more televised doubles shows,” Joe commented on a PBATour tweet. “They’re super fun to watch!”

Since its establishment in 1958, the PBA has been a rallying point for bowling enthusiasts who want to turn a traditionally solo hobby into a team sport that inspires community events.

The PBA: A Tight-Knit Community Continues to Grow

From first dates to first birthday parties, Taylor Lanes has been there for many special moments in people’s lives, and the Johnsons certainly see it as an important part of their family history. Monica and Shane built a relationship — and many friendships as well — at the bowling alley, and they continue to find community and camaraderie through PBA events across the country.

For decades, the PBA has brought people together over a love of bowling, and its welcoming atmosphere can make beginners, amateurs, and pros feel right at home. PBA event tickets are on sale online, and attendees don’t need to have any prior experience or knowledge to enjoy the games and activities.

“The PBA has some of the nicest guys and girls you will ever meet,” Monica said. “It’s the most fan-friendly sport out there, and anyone can bowl no matter what age or gender. I honestly can’t imagine how our lives would have been if bowling and the PBA didn’t exist.”