The Scoop: Daniel Cooney Fine Art is an ideal place for an intimate date because it stimulates conversation and deep thought. The gallery hosts accessible exhibitions that focus on little-known artists or rarely seen artworks, and it always has something new for art lovers to explore. The gallery provides support materials that can help couples understand the artist’s background and the artwork’s central message. Couples can take a stroll through Daniel Cooney Fine Art to discover culturally significant works and view life from a new perspective.

The exhibition will feature 20 drawings in colored pencil and pastel that capture an important yet little-examined phase in the artist’s career. Larry was a gay man who died of AIDS-related illness during the 1980s, and he used his artist tools to tell the story of young people just as the AIDS epidemic was beginning. 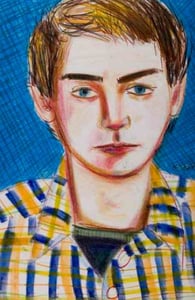 A self-portrait of Larry Stanton, whose exhibit at Daniel Cooney Fine Art captures the faces of young men at the start of the AIDS epidemic.

Larry’s drawings captured the face of a lost generation just as the AIDS epidemic was in its early stages, and the exhibition will pay tribute to them.

“He wasn’t addressing AIDS directly, but it was very much a part of the work because of the time and the social strata he was in,” said gallerist Daniel Cooney.

“A lot of people will love this Jill Friedman show. I know it’s going to be popular because the 1970s, gritty New York City, and policing are hot topics at the moment,” Daniel told us.

As a curator at Daniel Cooney Fine Art, Daniel’s goal is to bring recognition to little-known artists and to highlight underappreciated aspects of a well-known artist’s career. The gallery brings a new perspective to visitors, and that makes it a great choice for a first date or family outing.

“The shows are focused on an aspect of an artist’s larger career. Even if an artist has worked for decades, I usually focus on the work they did over a short time. Think of it like a glimpse into a time in an artist’s career,” said Daniel.

Art is a Conversation Starter for Couples on a Date

Taking a date to an art gallery can be a wonderful way to spark conversation. A large-scale study in Norway discovered a definite correlation between participating in cultural activities and experiencing good health and feeling satisfied with one’s life. This trend was apparent in both male and female study participants.

Gallery visits can make worthwhile date activities because admiring art can produce the same feelings as falling in love. A neurobiologist explained that when a person views a beautiful piece of art, it can trigger a release of dopamine in the brain. Dopamine is a chemical related to feelings of love, pleasure, and desire. 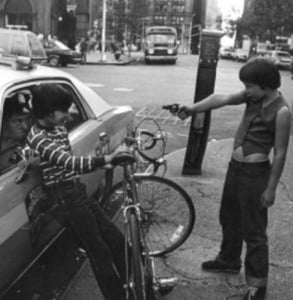 All in all, a visit to Daniel Cooney Fine Art can be an important bonding experience that adds extra beauty and passion to a couple’s dating routine. The independent gallery welcomes people of all ages and backgrounds, even those who are unfamiliar with art history or new to art appreciation.

“My exhibitions are pretty self-explanatory and accessible,” Daniel said. “You don’t have to have a PhD to understand them. Anyone can come in, talk about an exhibit, and experience in their own way.”

What’s more, the gallery is rarely crowded, so it’s a good space for a quiet chat. Couples can learn more about an artist and an exhibit by reading books and support materials during their visit. The art on display encourages visitors to take in the beauty of the moment without getting overwhelmed.

“It’s an intimate experience because the gallery is small. It’s not the same experience you’d have at a museum with many rooms and exhibits,” Daniel told us.

Daniel has a long history in the art world. He studied photography and then worked as an art broker at Sotheby’s and smaller galleries after graduate school. Eventually, he started his own gallery.

“I like curating exhibitions and talking to people about art. I like selling work to collectors,” he told us.

Daniel Cooney Fine Art opened in the Williamsburg neighborhood of Brooklyn in 2003. A year later, the gallery moved to its current location in the Chelsea neighborhood of the west side of Manhattan.

At first, Daniel curated shows featuring well-known works by famous artists. Then about eight years ago, he decided to shift his focus to less-established artists and rarely seen work from well-known artists.

Daniel Cooney Fine Art can give couples a lot to discuss and ponder.

Daniel has gone beyond the mainstream and looked for art pieces that may not be well-known but can still grab attention and send a powerful message.

By bringing forgotten or disregarded pieces to the forefront, Daniel Cooney Fine Art has fostered a one-of-a-kind art experience where even seasoned art lovers can see and learn something new. Sometimes the gallery’s unique displays appeal to particular audiences or raise awareness about niche causes, but they always get people talking.

Whether he’s featuring sculptures made by a fashion designer or promoting new works by a local New York artist, Daniel makes a point to highlight talent from unexpected corners of the art world.

Daniel Hopes to Explore New Facets of Art in the Future

As Daniel Cooney Fine Art nears its 20th year in operation, its founder said he is excited to continue introducing art fans to work they wouldn’t otherwise have a chance to see. From photography to sculptures to paintings, the gallery features a wide range of art and media forms that make a powerful impression.

“I show a variety of things, though there is a common denominator,” Daniel told us. “It’s work that has been around for a while, but it’s new to the people who come to the gallery.”

At the moment, Daniel is curating a show of works by Bernard Perlin (1918-2014), a painter who came out as a gay man in the 1930s. The Smithsonian American Art Museum describes Perlin’s work as a testament to the plight of the minority in the U.S. “Social comment was often implicit in his work,” the art experts say. “The isolation of the individual became a predominant thematic concern.”

Daniel said he is proud to showcase LGBTQ+ artists like Bernard Perlin who may not have gotten much recognition or attained fame in their lifetime but broke barriers with their honesty and artistry.

Daniel Cooney Fine Art creates a space where all types of art is celebrated and all artists have a chance to be heard and appreciated.

“I want to stay on track with what I’m doing right now. People are responding to all of our exhibits,” he said.