The Scoop: In 2015, Pasteur Street Brewing Company (PSBC) opened a 30-seat tap room in Saigon and began leading a craft brewing movement that has now spread throughout Vietnam. The PSBC brand grew as Vietnamese people got a taste for the American-style beers, and expats and travelers found a home away from home in its low-key tap rooms. Today, PSBC runs six tap rooms in Vietnam, including a newly opened one in Hội An’s Ancient Town, and its craft beers are available in 400 hotels, bars, and restaurants.

Paula A. stopped by the Pasteur Street Brewing Company (PSBC) tap room in Hội An for the first time with her boyfriend in tow. He’s a winemaker with a sophisticated palate, so part of the fun for him was exploring the dozens of beers on tap. 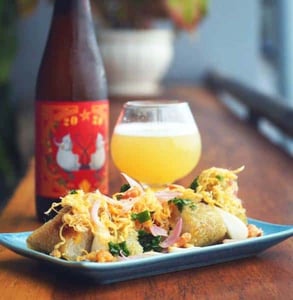 The bartenders, Sammy and Linh, invited the couple to sample a few beers while answering their questions and giving them a breakdown of the flavors at play. Paula ended up falling in love with a pomegranate-flavored IPA that she called amazingly unique. Meanwhile, her boyfriend became captivated by the knowledgeable and friendly beer experts at the bar.

“My boyfriend really went crazy talking about the beers with Linh,” Paula said in a TripAdvisor review. “Totally recommend this place — we would totally come back!”

Hội An may not be the first place you’d think to find a hip brewery, but the PSBC team prides itself on being out of the ordinary. The Hội An Tap Room opened in the heart of Ancient Town in 2019, and it has rapidly become a social staple and go-to date spot for beer-loving couples.

In the last few years, PSBC has opened six tap rooms and partnered with over 400 Vietnamese restaurants, bars, and hotels to make its beers available to people throughout the country. When asked what the future holds for the PSBC brand, Domestic Sales Director Mischa Smith said simply, “Onward and upward!”

Pasteur Street Brewing Company aims to continue coming out with new flavors and opening new tap rooms that will capture the imagination of Vietnamese locals and tourists in the mood to try something a little different.

“We will keep making the best beers that we can,” Mischa said. “We hope that people continue to love them and share them with their friends and families.”

The PSBC team has opened three tap rooms in Ho Chi Minh City, also known as Saigon, and these chill hangouts have become a rallying point for Americans as well as Vietnamese locals who enjoy Western culture.

The Hội An Tap Room had its grand opening in 2019, and it has already won over many regulars with its extensive beer selection and savory bar food. 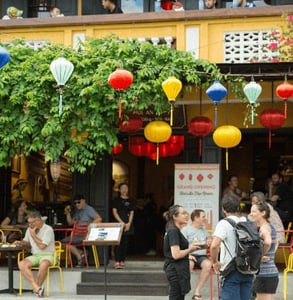 PSBC opened a tap room in Hoi An in 2019, and it has become a popular hangout for beer lovers.

PSBC offers a fusion of West and East with flavors that started in the U.S. and have taken on new life in Vietnam. From the Jasmine IPA to the Imperial Chocolate Stout, the PSBC menu has an imaginative array of tasty creations, and that naturally appeals to adventurous eaters and drinkers of all ages.

As a date spot, Hội An Tap Room has something other PSBC locations don’t have — a fantastic view. The brewery is in a historic building overlooking the river, and it sees a lot of tourists and pedestrians wandering in seeking good food, drinks, and conversation.

“The Hội An Tap Room is located in the heart of one of the busiest tourist areas in the whole country,” Mischa explained. “Visitors to Vietnam are growing more and more accustomed to seeing the iconic PSBC logo outside of bars and restaurants in almost any city that they go to. Once they’ve tried one or two of our beers at our wholesale outlets, they can’t help but stop in to one of our tap rooms to enjoy the full range of beers that we brew all year round!”

The Hội An Tap Room has married the fun-loving vibes of the original PSBC Tap Room with the traditional heritage of Bach Dang Street in Ancient Town. The colorful hanging lanterns and original paintings bring the space to life and ensure that it stands out on the busy street.

“Being a UNESCO heritage site, we couldn’t do too much to change the structure of the building but our team had a great time tailoring the interior design,” Mischa said. “The warm intimacy of this particular location and its one-of-a-kind setting make it our most romantic location, by far.”

When you visit a PSBC tap room, you can always find something new on its rotating tap list. The brewers work hard to craft special brews throughout the year and highlight seasonal flavors that’ll have people hankering for more. 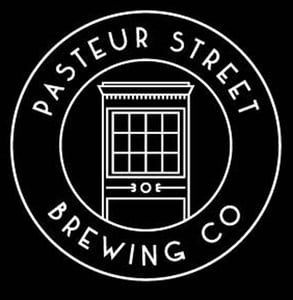 Pasteur Street Brewing Company releases a new beer each month as part of its Innovation Series.

The ongoing Innovation Series Beers have given regulars something to look forward to every month. The PSBC team releases a new beer each month and sells a limited number of bottles exclusively in the tap rooms.

“These are big, bold, flavorful, unique beers that allow our brewers the freedom to experiment with different ingredients and styles,” Mischa said. “Each beer is accompanied by a label design from different local artists.”

So far, the most popular batches of the Innovation Series include, the Vietnamese Breakfast Coffee Stout, the Chom Chom Milkshake IPA, 144 Loko Ale, and the Kaiju Bia, which was brewed with sake yeast from a family-owned brewery in Tokyo.

By continually churning out new beers, PSBC keeps people’s attention and gives them a reason to stop by the tap rooms again and again. Trying PSBC’s monthly brew could become a fun tradition for couples in town, and it can prompt people to go on a flavor adventure with their friends and loved ones.

While the PSBC movement started in Saigon, it has since spread to all corners of Vietnam, and the team aims to grow into an internationally recognized brand in the coming years.

“Our goal to be the biggest and most respected craft brewery in Asia,” Mischa said. “We believe this will be achieved by continuing to get as many of our beers out to as many areas of Vietnam as possible (this will always be our home!) while also expanding to other countries throughout Asia and the world.”

From a 30-Seat Tap Room to an Asian Sensation

Pasteur Street Brewing Company began in 2015 with two beer enthusiasts named John Reid and Alex Violette. John had been living in Saigon for about six years when he got the idea to start a brewing company in the East. So, he recruited Alex, an American brewmaster, to move to Vietnam and help create beers for an untapped market. The pair believed they could win over the Vietnamese people with their unique, international flavors.

Thanks to its focus on quality ingredients and friendly service, PSBC became one of the first brewing companies to successfully build a following in Vietnam. 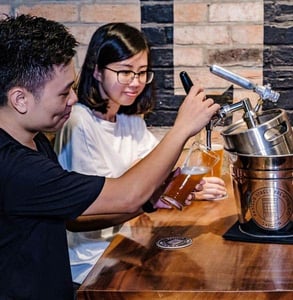 PSBC fans are a mixture of locals, expats, and tourists seeking a place to hang out with friends.

In the last five years, the PSBC team has created over 300 distinct beers, and it continues pushing the envelope and creating a buzz with its unique flavor combinations.

“We love beer, and we love sharing our creations,” Mischa said. “It’s been such a joy to see the company grow beyond the wildest dreams we had when we were getting started at our little 30-seat tap room on Pasteur Street.”

The PSBC logo has become a recognizable and trendy emblem available on hats, shirts, glasses, and posters. People can show their support for the PSBC brand by grabbing some of this cool merch.

In the next few years, the PSBC leadership team intends to open more tap rooms in Vietnam and pursue partnerships and business opportunities that’ll get more craft beers into Vietnamese hands.

“The beer business never sleeps, and the craft beer revolution is going strong. We intend to have our say,” Mischa said.

Since opening in 2015, Pasteur Street Brewing Company has endeavored to be the best brewers with the most delicious beers in Vietnam, and it is well on the way to becoming Vietnam’s most iconic first-date locale as well.

Many couples, including Paula A. and her boyfriend, enjoy the PSBC Tap Room’s unique menu and chill atmosphere, and the Hội An location has even more to love with its picturesque views and prime location.

Even as the PSBC builds its reputation, the team continues to dream up new ways to grow and attract people from all walks of life.

“We have never believed in patting ourselves on the back or resting on our laurels,” Mischa said. “Any amount of success that we have had has come through hard work and determination, and we know that we will need to continue this every day that we get up and get to work.”