The Scoop: Dating has changed significantly since the COVID-19 pandemic began. Many singles now get to know potential partners by spending more time connecting through video chats and over the phone. Anthropologist and Match.com Advisor Helen Fisher said she thinks these changes will be permanent — and beneficial to future daters. Couples who get to know each other better early on, and singles who figure out what they don’t want, can create stable, more committed partnerships.

The COVID-19 pandemic and subsequent quarantines have changed modern dating. Gone are casual first dates at coffee shops, and no longer do many singles lock eyes with a potential partner across a crowded bar.

Helen Fisher, an Anthropologist and Chief Scientific Advisor for Match.com, has collected results for her annual survey Singles in America for the last 10 years. The study used a national representative sample of 5,000 single Americans, based on the US census.

The results of the survey this year revealed some new trends, including that 58% of dating app users said they were more intentional in dating online. Meanwhile, 63% said they spent more time getting to know potential partners using the internet and their mobile devices. 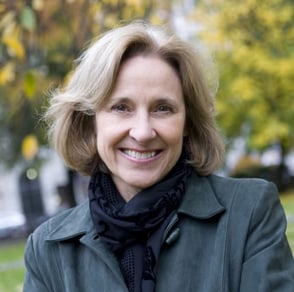 Anthropologist and Match.com Chief Scientific Advisor Helen Fisher believes that the pandemic has changed dating for the better.

Another surprising change is that singles are de-emphasizing looks, with 53% of respondents noting that they had changed what they wanted in a partner. Interestingly, there was also an increase in the willingness to date someone of a different ethnicity, as 24% of respondents said they were now more open to finding a partner of another race.

Survey results showed that, as they moved away from focusing on external characteristics, singles started to prioritize meaningful conversations and stability.

“We’re seeing people be more honest, and self-disclosure leads to intimacy. There is less emphasis on your looks and their looks, and more focus on someone who has a full-time job and is financially stable,” Helen told us.

It is clear, said Helen, that despite restrictions, lockdowns, and the COVID-19 pandemic, singles are still looking for love. Helen said she isn’t surprised by that reality.

“Cupid has beat quarantine. Love is a basic brain system, like the fear or anger system. It will never disappear,” she said with a laugh.

COVID-19 Has Changed Romance — For the Better

The COVID-19 pandemic has had many adverse effects. However, Helen suggests that dating and relationship-building have flourished.

One reason singles have bonded more effectively is because they’re getting to know each other before having sex. And they can connect more completely without meeting face-to-face through the rise of video dating.

Technology offers singles new ways to assess their compatibility. For instance, if two people don’t have shared values, they’re likely not to see each other again after their first meeting. 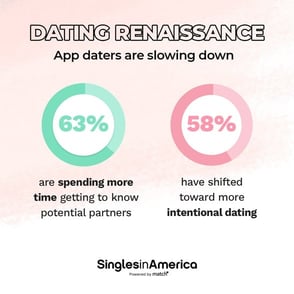 According to the Singles in America survey, singles are spending more time getting to know potential partners.

Helen notes that video chatting serves the same assessment function as a first date. She reported that 50% of singles in the survey who used video dating during the pandemic said they had fallen in love, and 56% said they had felt a romantic connection.

They’re using it as a vetting process to decide if they want to meet up in person. We will see more meaningful first dates because singles will already know they want to be there. When you’ve spoken to someone for months via video chatting, you probably know whether you’d like to kiss them too,” she told us.

Another benefit of video chatting is that sex is off the table. Singles don’t have to negotiate sex, or even physical touch at all, meaning that they can determine whether they click in other ways.

Further, financial concerns are not as important in video chatting. Couples don’t have to decide if they want to meet up in a coffee shop or a fine restaurant — and the social implications of those meet-up spots aren’t relevant, either.

Recently, she revised her 1994 book “Anatomy of Love: A Natural History of Mating, Marriage, and Why We Stray”. The book explores conventions of marriage in 80 societies worldwide, along with explanations about adultery, the brain circuitry of romantic love, and attachment and the future of the family.

That research led her to conclude that two-income partnerships are not only ancient but highly beneficial to marriages. 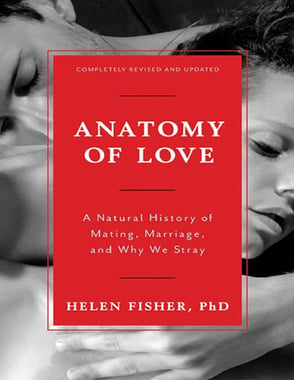 Helen Fisher recently updated her book “Anatomy of Love: A Natural History of Mating, Marriage, and Why We Stray.”

“For millions of years, women commuted to work to gather their fruits and vegetables,” Helen said. “And regularly came home with 50% or more of the evening meal. Women were regarded as economically, socially and sexually equal to men.”

But when the agricultural revolution emerged some 10,000 years ago, women could no longer wander off the farm to do their gathering, while men’s roles became more and more important as farmers. And with this, a whole new set of beliefs arose, including virginity at marriage, a woman’s place is in the home, the man is head of the household, and till death us do part.

“Today,” as Helen said, “all these agrarian credos are disappearing before our eyes. In fact, we are returning to life as it was in our hunting/gathering past — with the rise of women in the work force and the double-income family. That has to be good for partnerships.”

Helen also wrote a book called “Why Him? Why Her?: Finding Real Love By Understanding Your Personality Type”. The book shows that humanity has evolved four basic styles of thinking and behaving associated with four specific brain systems and that we are naturally drawn to some people rather than others.

If an individual is drawn to a personality type that clashes with theirs, that may explain why they struggle to make relationships last.

Helen is currently working on a companion to this 2009 book.

“My new book explains why you’re drawn to this kind of person in love and in business and how you can reach them naturally, using brain science. I no longer believe in the golden rule; I believe in the platinum rule: do unto others as they would have done to themselves. Understand who they are biologically (as well as culturally), and then you can reach them at their core,” she told us.

After reading a study out of the University of Chicago that covered online dating benefits, Helen pondered why that would be.

That emotional, intellectual connection has been highlighted during the pandemic as couples have to wait longer to meet face to face. The new way of meeting and deciding to marry contributes to a phenomenon Helen calls “slow love.”

“Slow love is about people being careful about who they commit to. Millennials are spending a great deal of time building a stable career and figuring out who they really want before they tie the knot,” Helen told us.

“The later you marry, the more likely you are to create a stable, happy long-term relationship. This slow love, a long period of courtship, will contribute to more stable partnerships,” Helen said.

This pandemic has slowed down courtship even more. These new dating habits, including the rise of video chatting, are likely to last after the pandemic subsides because, during a video chat, sex and money are off the table, and singles can vet potential partners before they spend their valuable time and money on a first date.