Editors’ Choice Award: The Great American Dollhouse Museum is a Charming & Unique Place to Take a Date in Danville, Kentucky

The Scoop: The Great American Dollhouse Museum in Danville, Kentucky, is unlike any date venue you’ve been to before because it contains over 200 miniature worlds. Couples can admire luxurious mansions, fantasy castles, and colonial villages, and they can stroll through miniature coal mining towns and farmlands. Each display offers a window into another place and time, and it’s easy to get caught up in the delightful artistry and attention to detail in this one-of-a-kind museum.

In 2005, Lori Kagan-Moore was at a crossroads in life. Her children were grown and able to take care of themselves, so she began looking for a project to devote her energy and time to.

One day, she opened a box of old miniatures from a childhood collection, and she marveled at the passion and care that went into those small yet valuable items. Lori’s mother was an antique dealer, so she has a great appreciation for artifacts from the past.

“I had three small boxes, not even enough to fill one dollhouse, but it was like opening Pandora’s Box,” Lori said. “The spirit of miniatures flew out and landed in my head, and I just started collecting again.”

A year later, Lori and her husband bought a warehouse in Danville and began refurbishing it into a welcoming museum space. In 2008, The Great American Dollhouse Museum officially opened its doors to the public.

The Dollhouse Museum currently has over 200 dollhouses on display in a series of interconnected neighborhoods, and many curators, artists, and antique dealers have come together to make this miniature world something really special.

The museum can take visitors through the history of the United States, including Native American exhibits, a Colonial town, Underground Railroad scenes, and a modern tableau. Its displays also include a meticulously organized miniature town called Copper Hollow that displays a broad cross-section of social life circa 1910.

The Dollhouse Museum is a great destination for people of all ages, but it is particularly enjoyable for couples looking for a daytime date activity that’s off the beaten path.

“It’s a really fun experience to share,” Lori told us. “And it’s a really fun memory to have together. It’s such an unusual place. You won’t go anywhere like this again.”

Many people visiting the Dollhouse Museum in Danville don’t quite know what to expect. Some mistakenly think it’ll have a lot of dolls on display, and they’re taken aback by the extensive miniature scenes snaking through the warehouse.

The intriguing setup often attracts grandparents and grandchildren on a family outing, but it can also provide a lovely and quiet backdrop for couples going on a date.

The Dollhouse Museum has a lot of surprises in store, and its displays are far from typical. Visitors can see luxurious and well-kept miniature houses, but they can also take a look at the wrong side of the tracks in the factory district and mining camp.

“The things that interest me most as curator are the more rugged areas,” Lori said. “It’s important to have amazing mansions and opulent furnishings, but I also like things that are more unusual like a gritty tobacco auction or poor rooming houses.” 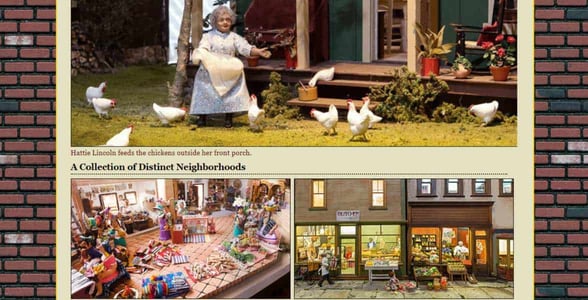 The Dollhouse Museum features antique and historical miniatures that tell a story.

The Dollhouse Museum sees a lot of collectors stopping by, and it offers a miniatures store to support people who want to build, maintain, and beautify a small world of their own. The store’s inventory includes dollhouse furnishings, accessories, and do-it-yourself components. Some are bargain-priced items for under $5 as well as handcrafted artistic pieces worth over $100. You can even find electrical wiring ready to install in a dollhouse.

“If somebody has an interest in dollhouses or miniatures, this store really is a find because it’s huge and the prices are affordable,” Lori told us. “We sell fixer-upper dollhouses that are pre-owned as well as high-end dollhouses with all the furnishings and accessories.”

Some couples plan weekend trips around the Dollhouse Museum, and they enjoy the family-owned restaurants scattered throughout Danville. Lori said the area has many charming bed-and-breakfasts, and she particularly recommended The Farm LLC as a romantic place to relax with a loved one.

Due to the nature of the Dollhouse Museum, it naturally appeals to seniors who want to take a stroll through the past and enjoy a quiet, thoughtful afternoon among antique collections. It’s not unusual to see children coming along with their grandparents and becoming equally enamored by the stories on display.

Lori said she’ll often see couples who made a surprise visit to the Dollhouse Museum and found more of interest then they expected. “We get universal rave reviews — from men and women,” she said. “That used to surprise me, that men love it so much, but not anymore.”

The Dollhouse Museum currently ranks as the #1 thing to do in Danville, according to TripAdvisor, and many reviewers say their visit was the highlight of their day.

“We didn’t know what to expect and were pleasantly surprised,” Rocky said in a review. “Once inside, we were met with amazing displays, huge content, and a shop with any dollhouse accessory you could want!”

The Dollhouse Museum is a wonderful destination for people of all ages.

Cher and her husband said they loved taking a trip down memory lane courtesy of the Dollhouse Museum. “This museum is designed to take you through an era of times past and present and fantasy,” Cher explained. “The storytelling details on the exhibits make you feel included in the neighborhood activities.”

Shauna and her partner came from Alabama to spend three hours at the museum, and they said it still wasn’t enough time to see every detail of the display. “Our visit to the museum and miniature shop was amazing,” Shauna said on TripAdvisor. “I look forward to making a return trip, hopefully a longer visit next time!”

“We admired the creativity, attention to detail and humorous touches reflected in the many exhibits,” a couple from California said. “We planned a trip to Danville specifically to visit this museum.”

The Team Works Hard to Create an Imaginative Space

The Dollhouse Museum accepts donations from collectors all over the country, and Lori said she receives a few calls a week about a possible donation. She can’t display them all, of course, and she only accepts pieces for show that will fit seamlessly into the narrative of her miniature exhibits.

About five years ago, a Huntsville artist named Alma Kiss reached out to offer a miniature rural area that had taken 30 years to complete. Lori drove to Alabama to see the display and was amazed by how perfect it was for Copper Hollow.

It took two truck trips to bring the entire piece to the Dollhouse Museum, and Alma came to see how it fit into the display. While she was there, Lori mentioned that they needed landscaping work to connect the dollhouses in Copper Hollow, and Alma volunteered to help create the stone walls, apple orchards, and other little details that would turn individual dollhouses into a seamless neighborhood.

Since then, Alma has visited Danville for three weeks at a time a few times a year to help create the artful touches that make the Dollhouse Museum so special.

“She’s probably the best landscape artist in this field,” Lori said. “She works 12-hour days, seven days a week. I bring her food here for lunch, and then she’s back to work.”

A creative and passionate team looks after the Dollhouse Museum.

The next big project on the Dollhouse Museum’s agenda is a Medieval Quest land, which will take about a year to complete. The team also wants to install an early 20th century hospital and funeral home. As if all that weren’t enough, Lori is currently working on a 50-page guidebook full of stories and photographs from the museum.

Lori said the museum’s creative projects are typically dictated by the donations they receive, and sometimes a unique offering — like Alma’s Farm Road — can change their priorities and create new, interesting spaces for the museum.

“It just depends what comes over the horizon,” Lori said. “If we find something amazing, we’ll stop what we’re doing and work on that for a while. We’re continually on a front-burner back-burner exchange of what comes next.”

The Dollhouse Museum Makes an Impression on Couples

While movies and restaurants can be fine for everyday dates, sometimes couples crave something different and want to share in a one-of-a-kind experience — and that’s what the Great American Dollhouse Museum is there for.

This local curiosity is among the most interesting date venues in Danville, Kentucky, and it’s a wonderful place for people to go and appreciate the little things.

Couples can take an imaginative journey through the Dollhouse Museum and create special memories looking at the exhibits cultivated by a team of collectors, artists, historians and curators.

“This is just a really extraordinarily fulfilling and fun thing to do,” Lori said. “People say they’ve never seen anything like it, which actually makes sense because there isn’t anything like it anywhere in the world.”