The Scoop: Fruition Chocolate Works, located in Shokan, New York, is one of the most renowned chocolatiers in the world, with its selections being sold across the United States and in select parts of Canada, the Netherlands, the U.K., Germany, Singapore, and Japan. The husband-and-wife team behind Fruition Chocolate Works develops ethical, eco-friendly chocolate bars, caramels, cookies, and coffees in their small factory and café. Couples looking for a sweet way to celebrate relationship milestones can order any of the shop’s delicious treats for their partner online, and those who travel to the Catskills can make a pit stop for a treat at the Fruition Chocolate Works café.

Bryan Graham discovered his love for artisanal chocolates while interning for famous chocolatier and pastry chef Jacques Torres in New York City. However, chocolate wasn’t always his passion. When he had to choose an internship for culinary school, he chose one with Jacques because he wanted to be close to his girlfriend Dahlia — who is now his wife.

“I was a teacher in New York City at the time, and that led him to choose the Jacques Torres route. After he got his hand in chocolate, he fell in love with it,” Dahlia told us.

After his internship, Bryan took classes on chocolate-making to continue building his skills. Together, the couple started experimenting with chocolate-making in their kitchen. Bryan was fascinated by how sweet chocolate was made and how much relationships with cacao farmers influenced the final product. He also learned to roast the cocoa beans himself.

After their honeymoon, the Grahams decided to move near Dahlia’s hometown of Woodstock and Bryan’s hometown of Olivebridge to nearby Shokan, New York. There, they turned their chocolate-making hobby into Fruition Chocolate Works.

“We thought, ‘Why not do it here where we’ll have support from our friends and family? We’ll get started here, and then move it to where we want to be.’ But the longer we stayed, the more rooted we became,” she said.

Today chocolate lovers from around the world make the trip to Fruition Chocolate Works, which is still in Shokan, to enjoy specialty bars, candies, and even coffee drinks. Couples celebrating relationship milestones can also order the company’s chocolates to their homes.

Over the years, the Grahams’ passion for chocolate-making has only grown. Their meticulous process has garnered more than 70 awards for their confections and has made them one of the most respected chocolatiers in the world.

Fruition Chocolate Works confections have become such a popular choice for relationship celebrations because of the careful production process. Its sweets are so tasty because the company uses the highest quality ingredients available, including ethically sourced cocoa beans and locally featured ingredients.

The Grahams always research where the cocoa beans come from and share that information with customers. That transparent sourcing model also means Fruition Chocolate Works pays above-market prices so farmers can make a better wage than if they were to sell cacao in the commodities market.

Next, they aim to source as many ingredients as they can from local producers. While cacao is not grown in New York state, Fruition Chocolate Works does use locally distilled bourbon for its fan-favorite Brown Butter Bourbon Caramels.

“It’s a 68% dark chocolate shell from the Dominican Republic. The filling is buttery, bourbon goodness. We’ve had a hard time keeping it in stock,” Dahlia told us.

It also uses local bourbon in its Hudson Bourbon Dark Milk 61% bar, made by aging cocoa nibs with the liquor.

The Fruition Chocolate Works team continues to innovate, as well. Recently, it released a new edition of the Bolivia Wild Forest 74% bar. The cacao in the bar isn’t traditionally harvested. Rather, it is collected from island forests in Bolivia where farmers crack open the pods, scoop out the seeds, and ferment and dry them before they are then dried again and sorted in a central location.

The rare chocolate is a part of Fruition Chocolate Works’ limited-edition selection.

“We always focus on taste and quality. It’s a labor of love, and thought goes into every step along the way. Hopefully, that’s appreciated by the person who enjoys it in the end,” Dahlia told us.

Couples Can Visit the Factory in Shokan, New York

The Fruition Chocolate Works factory is open to the public. In addition to making chocolates on-site, the Grahams also operate a café that has garnered a following of locals and tourists who visit the Catskill Mountains.

“We’re situated near the Ashokan Rail Trail, which is new and has become a tourist attraction. We’re near a road near the main route to the mountains. People coming to the area pass through and are excited to discover us,” Dahlia said. 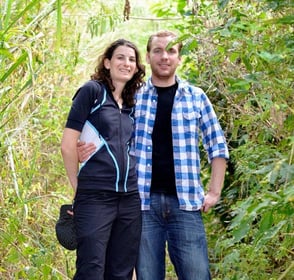 Fruition Chocolate Works is located in Shokan, New York, but Bryan and Dahlia source some of their Cacao from local producers in Peru.

The couple initially thought that Shokan would be a temporary location for their business, and they would eventually relocate. However, after years of operation, the location has become a destination for chocolate aficionados.

“We’re here in what kind of feels like the middle of nowhere, but people like to plan trips around stopping here,” said Dahlia.

Couples who visit the café can order a wide variety of treats, including brownies and chocolate chip cookies. The Grahams also recently started serving chocolate-heavy drinks, including mochas, hot chocolate, and bourbon caramel lattes. If someone prefers a more traditional drink with their chocolate, the cafe offers espresso, lattes, and americanos, as well.

With current health and safety protocols in place, chocolate lovers can order at the café’s window rather than from the tables inside. Bryan and Dahlia said that, while they are glad they can still serve guests, they miss the immediate feedback on their products.

“We love it when we can watch someone try something that lit up their senses or brought back a memory. That’s a big part of why we do what we do,” Dahlia said.

The New York café has become a noteworthy destination, but couples around the world can also celebrate their relationships with Fruition Chocolate Works products.

“We sell our products to cafés nationally and internationally. We are selling chocolate in Singapore, the U.K., and Japan,” Dahlia told us.

Though the pandemic has shut down in-person operations, Dahlia said that Fruition Chocolate Works still dreams up concoctions for everyone to enjoy.

The espresso machine is one recent addition that the shop uses to create new additions to its drink menu.

“We’ve started serving a strawberry almond steamer as a special, and we’re always innovating and trying to come up with the next flavor,” Dahlia told us.

Spring will be a busy time for the company, with new offerings and celebrations on the horizon. In early March, it plans to launch a new product: chocolate-coated nuts, with hazelnuts and citrus-infused milk chocolate, and packaged in tins. 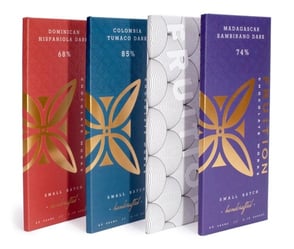 In time for Easter, Fruition plans to offer eggs filled with strawberry and basil, and peanut butter toffee, s and decorated in robin’s egg blue. That’s in addition to its traditional hollow dark-chocolate bunnies.

For Mothers’ Day, the company aims to restock its popular passion-fruit caramels.

Bryan and Dahlia are already gearing up for the popular summer tourist season, as well. In the past few years, they’ve started offering ice cream during the warmer months, including ice cream sandwiches, soft serve, and sundae specials.

Fruition Chocolate Works has been expanding its product line and its customer base since the Grahams opened years ago. Bryan and Dahlia were on different paths in life when their passion for chocolate came calling. Though neither would have expected to run a chocolate company in Shokan, they’re thrilled with where their journey has taken them.

“We’re excited to make something that people enjoy,” said Dahlia.