The Scoop: Online dating can wear singles down with too many options and unnecessarily time-consuming matching. Keeping up with multiple text conversations and juggling date options can be downright exhausting for the modern dater. That’s why singles events, especially speed dating, has recently seen a resurgence in popularity as singles ditch their phones and seek IRL ways to connect. A longstanding speed-dating company called 7 in Heaven has seen its membership increase dramatically, and as a result its services have grown to serve singles throughout New York and Long Island. The company currently has over 8,000 active members, and more people sign up every day in hopes of meeting someone special without swiping.

Ken had tried online dating for years with no success when his friend Paul asked him if he wanted to go to a speed dating event. The two single guys figured it’d be fun to hang out at a hotel bar, even if they didn’t meet anyone, so they went to Jones Beach Hotel speed dating event organized by 7 in Heaven.

That’s where Ken met JudyAnn, and they fell for one another immediately. “We get along as though we’ve known each other for years,” he said. “We are the best of friends and an even better couple. I couldn’t be a happier man as JudyAnn is the love of my life.”

Gail Adams founded 7 in Heaven in January 2008 to inspire such love stories and help thousands of singles expand their social networks.

The matchmaker saw how disconnected and burnt out singles could get and wanted to bring the fun back into dating. She has since hosted singles events at upscale restaurants, backyard BBQs, escape rooms, and other fun venues in Long Island. She specializes in arranging themed speed dating events for people in particular age groups.

Now 7 in Heaven has added a calendar of events in New York City to satisfy singles living in the Big Apple. Gail herself doesn’t run these events, but she partners with big names in the industry to provide resources to active daters in the area. Her goal is to promote as many ways to meet people as she can so that singles never feel as if they’re out of options or on their own.

Gail’s emphasis on face-to-face events has been good news for the local dating scene and helped countless people get in long-term relationships.

“I find people really enjoy meeting date prospects face to face,” she said. “It builds momentum, and that’s the reason why a relationship grows.”

Business is Booming for the Longstanding Company

Online dating burnout is a growing and worrisome trend in the dating scene. You can only swipe through so many hundreds of profiles before losing the will to send another “hey, how are you?” message to someone who may or may not be worth your time. When singles burn out on online dating, they start looking for alternative ways to meet local singles, and that’s usually when they discover singles events and speed dating.

Professionally organized singles events fill a need in the modern dating scene. Many singles have had enough of the swiping and ghosting lifestyle, and they just want a more efficient way to screen first dates. That’s where 7 in Heaven comes in.

This time-tested company hosts events on Long Island and in parts of New York City. The team groups participants by age and puts a great deal of thought into how to create an opportunity-rich dating environment. On average, 7 in Heaven hosts 15 events per month. People as young as 23 and as old as 69 can register for an event in their age group. 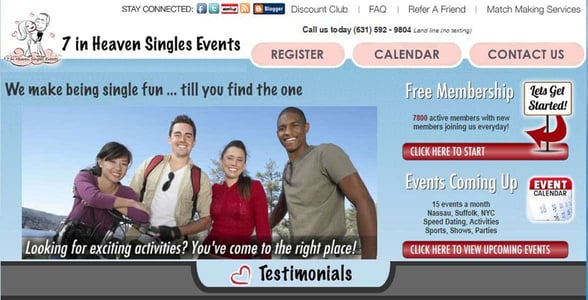 7 in Heaven has introduced 13,000+ singles at fun events in Nassau, Suffolk, and New York City.

Although 7 in Heaven has been around for over a decade, its events have hardly grown stale. The team organizes fun activities, including kayaking and polo, as well as fun settings, including a bar or an escape room, to stimulate the mind and get people talking. Instead of just putting singles in a room together, the 7 in Heaven team endeavor to engage them in an activity that’ll help them relax.

“We have a lot of cool new events,” she said. “We’re always looking for new, fun, and exciting ideas. We’ve tried all kinds of things over the last 10 years.”

Whether at a barbecue or a museum, the singles events facilitate conversation and encourage participants to come out of their shells.

The popularity of these events has led 7 in Heaven to expand its calendar and its team to meet local demand. Gail said she’s looking to hire event organizers in the near future, so she can take a step back from the company and yet still expand its reach. These new hires must be dependable and outgoing individuals who enjoy hosting events and meeting new people. Gail sets high standards for the 7 in Heaven team because its mission is so important to so many.

As far as speed dating companies go, 7 in Heaven is one of the most rigorously organized around. The team has put together five age groups ranging from 23-38 to 54-69 and organizes events that cater to these groups. That means you won’t find a 60-something single mingling with a 30-something single. Everyone is an age appropriate date for one another, which makes it easier to form connections.

Over the last 10 years, 7 in Heaven has helped countless people find love. The company currently has over 8,000 members, and over 13,000 people have attended its events. Singles from all walks of life — from lawyers to psychics — have benefited from the event service. A man in his 70s met his one-true love at a 7 in Heaven event a few years back, and the couple later got married at the venue where they’d met.

“Frank is my sweetest friend, the man of my dreams, and I will never forget the role you played in introducing us. We are both so grateful to you.” –Madeline

One of the most important factors of a singles event is the gender ratio. This is particularly true for speed dating events where men and women are paired with one another for mini-dates. If the event doesn’t have an equal number of straight men and straight women, some participants may end up twiddling their thumbs during the timed mini-date sessions.

Gail has seen how no-shows can put a damper on her events and decided to do something about it. She has tightened up 7 in Heaven’s refund policy to discourage cancellations and make sure participants aren’t left sitting out of the speed dating process because of an uneven number of men and women at an event.

“My success depends on the pre-registration numbers for the speed dating events” she said. “I need to do an accurate headcount to get an exact gender balance, and no-shows can upset that balance — that’s why I had to tighten my guidelines for refunds.”

Ken said in his testimonial that he never would have met the love of his life without 7 in Heaven, and many other participants say the same. Speed dating events offer something online dating cannot — face-to-face interactions with singles who are the same age and live in the same area as you.

All in all, 7 in Heaven fosters a comfortable, low-key environment where singles can meet, mingle, and fall in love. That storybook romance doesn’t always happen in the first five minutes, but some mini-dates can form the foundation of a solid friendship, which can lead to a relationship. Sometimes all a single person needs is a foot in the door to make the right connection.

Gail’s speed dating company gives singles the chance to establish chemistry and get to know each other better in a casual, date-friendly atmosphere.

“It gives me a lot of self-satisfaction when people meet each other at my events,” she said. “It’s not just about dating either. They can make new friends and widen their social circles, which is often very important for singles who feel disconnected.”