The Scoop: Since 1994, Transpacific Marriage Agency (TMA) has facilitated loving relationships between Western men and Japanese women. The online dating service empowers singles to pursue dates abroad and build marriages based on mutual interest. TMA holds its clients to high moral standards and goes to great lengths to ensure they have a safe and friendly dating and marriage experience.

Sometimes love finds people in unexpected places. During WWII, my great-uncle was stationed in a small port in Japan when a young Japanese woman crossed his path. He didn’t speak any Japanese, and she didn’t speak any Spanish. However, they were both fluent enough in English to communicate their feelings for one another. They fell in love and got married as soon as the war was over.

My great-uncle shocked his family by returning home with a new wife, and his parents weren’t the only ones who thought such an unlikely relationship could never last. However, the married couple worked hard to overcome their differences, and their two cultures soon blended into one family. They stayed together until his death in 2001. 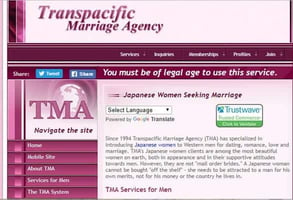 The Transpacific Marriage Agency is a reputable dating service for Japanese women and Western men.

International marriages often require sacrifice and compromise, but that can strengthen the bond between two people determined to make it work. In the wake of globalization, international relationships have become increasingly common as borders can no longer keep couples apart.

Many Western men have turned to Japan in hopes of finding a devoted soul mate on foreign soil, and Transpacific Marriage Agency (TMA) been an ally to these intrepid singles.

Now celebrating its 25th year in business, TMA excels at pairing Japanese women with Western men. The international dating service started with offices in Tokyo, Japan, and Berkeley, California, but it has since expanded into the UK, Canada, Australia, and other Western countries.

TMA is not a mail-order-bride services and escort company. Instead, it has always focused on building real relationships between elite singles interested in marriage. The site runs a tight ship and verifies the identities and does background checks on all of its clients to ensure they are serious candidates who are intent about marrying the right person.

TMA Founder Bruce Smith has lived in and been closely connected to Japan for decades (since he was a teenager), and he understands the challenges international couples face. His goal is to prepare clients to overcome those challenges and build a lasting commitment, so he doesn’t cut corners when arranging introductions. About 40% of TMA clients get married within two years of joining the marriage agency.

“Communication with your partner is key to making it work,” Bruce said. “International marriages can have many hurdles, but all marriages take work. We coach our clients to help them have a good experience with our international dating and marriage agency service.”

A Personalized Service Guides Singles to the Right Match

TMA has been around since the early days of the internet, and yet its network continues to grow as more singles see the value in seeking love abroad. According to Bruce, the TMA website has over 15,000 active profiles and receives over 1,000 contact requests each month.

“We’re not super big,” he said. “We’re not trying to solve everything for everybody. Our clients are interested in a particular type of partner, and that’s where we can help.”

TMA conducts thorough background checks on its clients and only accepts individuals who are authentic, eligible, and marriage-oriented. The site also enforces a mutual matching system and only exchanges contact information when singles have both expressed interest in getting to know one another better. Most singles provide an email address as their primary point of contact, but some couples choose to exchange phone numbers or even mailing addresses.

From start to finish, the TMA matchmaking system prioritizes quality over quantity and encourages singles to take the online dating and marriage process seriously. 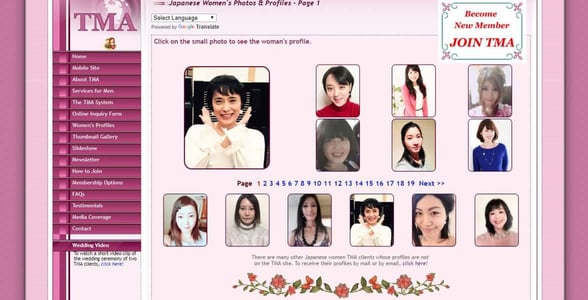 TMA opens singles up to a world of exciting dating possibilities.

Bruce described the typical TMA client as a family-oriented single who’s dissatisfied with the local dating scene. Young Japanese women are often attracted to the generally liberal values in the West, while Western men see Japanese women as beautiful and intelligent life partners.

The TMA website has built-in translation tools to help singles overcome language barriers as they browse profiles and get to know the international dating scene. Bruce said 90% of TMA clients communicate in English, and most Japanese women understand the language enough to hold their own in a conversation.

TMA allows singles to search for a match on their own, but the team also makes personalized recommendations based on client preferences and pull profiles of people who match those preferences and prefer not to broadcast their information online.

“Confidentiality is of the utmost importance,” Bruce told us. “Most of our clients are very private, and some don’t want their profiles online where anyone can see their information. We respect those wishes and do our best to meet their demands.”

Over 9,000 Marriages & Less Than a Handful of Divorces

TMA has been in business for a long time, and it has helped thousands of singles find friendship, love, and marriage. Bruce estimated that the company has been responsible for over 9,000 international marriages. What’s more, he has only heard about a handful of divorces. “I can count them on one hand,” he said. “We’re pretty proud of what we’ve accomplished.”

The signature TMA matching system ensures that the couples who get together stay together, and that’s a huge selling point for relationship-minded singles. Potential clients need only read TMA’s testimonials to see how impactful the dating service can be.

“We have been happily married for two years,” said Terry and Keiko, who met through TMA and now live in Australia. “[We] always think how lucky we were to find each other even though we were separated by such a long distance. TMA made it possible.” 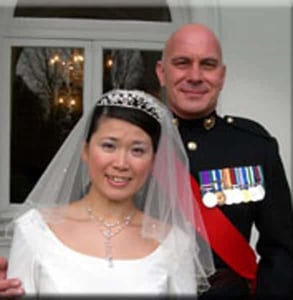 Craig met Tomoko on the TMA website, and they are now married and living in North Carolina.

A 34-year-old American named Craig joined TMA to find a second chance at love. His first wife had left him out of the blue, and he wanted a new relationship to heal his broken heart. Within six months, he met a beautiful woman named Tomoko and was surprised to find that she was genuinely interested in him as well. “I never dreamed a woman so caring, kind, loving, intelligent, and beautiful could fall in love with me,” he said.

Craig is now happily married to the woman of his dreams. “Every beat of my heart has her name on it,” he wrote to the TMA team, “and it is all thanks to you!”

An Austrian single name Michael said he was quite impressed by the beauty of the women on TMA, and he quickly met a woman willing to travel to meet him and start a romantic relationship. He said he knew early on this woman would become “the love of a lifetime.”

“TMA does not nickel-and-dime you,” said Bob when recommending TMA to a friend. “They are an honorable operation, sincere, and honest. I have been a member of TMA for several years.”

Bruce said he built TMA to serve singles around the globe and make a difference in people’s lives. The dating and marriage agency service has since carried out this lofty mission by matching thousands of compatible men and women across the globe.

International relationships can give singles a chance to learn and grow beyond their personal limitations. It can be challenging, but, as my great-uncle and great-aunt discovered, the end result is often life-changing.

Transpacific Marriage Agency is in business to change lives. The website introduces single women in Japan to single men in Western countries, and its personalized matching system allows them to build a strong foundation for a relationship. This hands-on dating service has stood the test of time, sparking countless relationships in the last 25 years, and its global network continues to grow to this day.

Bruce has seen many inspirational love stories over the years, and he has learned what it takes to make an international relationship go the distance. He has designed TMA to break down cultural barriers between the East and the West, so singles can broaden their horizons and find loving relationships.

“People are generally a lot better off when they can experience other cultures,” he told us. “In many respects, we’re more alike than we are different, and I feel it’s important that we come together and build those relationships.”