The Scoop: “Twifing” is another term for scanning Twitter, WhatsApp, Instagram, and Facebook on your mobile device. The practice can lead to significant friction for many couples, but most dating platforms don’t even take those habits into account. Mix Amore is a dating app that recognizes that important compatibility marker and offers a modern solution for interracial and ethnically diverse singles. The app uses a proprietary “twifometer” algorithm that matches users based on their social media usage. With Mix Amore, singles can find compatible partners who share digital habits, open minds, and open hearts.

While some singles have never heard the term “twifing,” they’ve probably experienced it. One example is when they go out to a restaurant with a date, and, within minutes of sitting down, the other person pulls out a mobile device and starts scrolling through social media.

While one person is prepared to have a pleasant conversation, the other is busy twifing — a term that describes scrolling through Twitter, WhatsApp, Instagram, and Facebook. It may seem harmless, but it can be a significant challenge in modern-day romantic relationships. 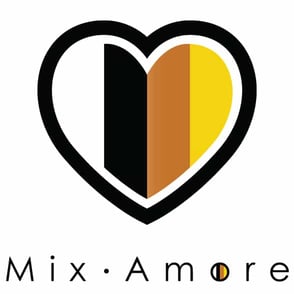 Mix Amore specializes in helping singles find partners of any race who have compatible digital habits.

Studies have shown that it’s common for one partner to feel neglected — or even rejected — when the other spends too much time on a mobile device. That can lead to disagreements over the lack of compatibility, and some couples compromise by limiting screen time or maintaining technology-free zones or activities.

Interracial dating app Mix Amore is based on the premis that it may be easier if couples had compatible twifing habits from the start. That was the inspiration behind the company’s proprietary algorithm that helps singles find physically, emotionally, and digitally compatible partners.

“One day, I was out eating at a restaurant and took a minute to enjoy the ambiance. While looking around, I noticed something strange: Everybody was on their cellphone. Nobody is talking to the person they are with,” said Graceful Grady, Mix Amore CEO and Founder. “At that point, I decided to start the Mix Amore platform as a niche for those who are frustrated with dating someone who is always on their phone twifing.”

To determine the compatibility of twifing habits, Mix Amore’s algorithm, which it calls a “twifometer,” compares social media usage and determines matches. That modern innovation is in addition to the racially and ethnically diverse group of singles who visit Mix Amore to find the right partner.

Members of Mix Amore are open-minded enough to search for matches who could be a different race or ethnicity, but still need compatibility in certain areas of their lives. Today, many enlightened singles aren’t as concerned about a person’s skin color or background as much as they are about their interests and values.

That became evident as Graceful developed the app.

“I thought about how I was in a multicultural marriage and then observed the shows, commercials, and movies of today. Multicultural and interracial relationships are shown all the time,” Graceful said.

That observation is backed by statistics. The U.S. Census report on interracial and interethnic marriages shows that the trend is on the rise throughout the country. In 2000, 7.4% of married couples reported being of a different race or ethnicity. In 2016, that percentage increased to 10.2%.

That trend is happening in the West and Mid-Atlantic regions of the U.S., especially, but Mix Amore reaches well beyond those areas. The app is available to daters around the U.S. and the world.

Although it is growing an international presence, the app’s current user base is around 90% American, with an average user age of about 29 years old. Most members are marriage-minded and open to relationships with other singles of all races and sexual orientations, Graceful said.

The first thing that many singles notice when they start searching for interracial or interethnic relationships online is that most platforms are focused on connecting members of the white and black communities. That is why Mix Amore set out to shine a light on other partnerships.

“Wake up! There are other races out here,” Graceful said. “What people don’t know is that marriages between white and black people are not even in the top two. Those would be Asian and Hispanic.”

Once users download the Mix Amore app, setting up a profile is intuitive, and users can quickly upload crisp, clear photos from their mobile devices. Users can find features like a “Hotlist” and opt to receive push notifications when someone wants to connect with them. The app offers real-time messaging and even added video chat, which is a great way to get to know someone and to bypass any scammers completely.

The Mix Amore app allows users to control their dating lives from their mobile devices.

Along with the traditional swiping and search methods, Mix Amore stands out for its unique algorithm to match social media usage as a factor in compatibility. In fact, the technology is so innovative that Mix Amore has a patent pending on it.

“One of the major causes of breakups and divorces, not only in the U.S. but around the world, is social media usage,” Graceful said. “Mix Amore is the only app with a patent-pending algorithm trying to solve this problem. The problem is so bad that attorneys now have social media pre-nuptial agreements.”

The platform also determines compatibility through a variety of other areas, including interests, hobbies, and personalities. And the app is designed to make finding an interracial or interethnic partner simple, so daters can spend less time searching for someone on their mobile devices.

Mix Amore Sets Members Up for Success in a Digital World

Graceful said he often hears from people who have become frustrated with the twifing habits of their partners. He said that one local DJ in Atlanta, where Mix Amore is based, complained on-air about how much twifing he experiences on his dates. He told a story about his friend who purchased two $500, front-row tickets to a basketball game between the Atlanta Hawks and the Golden State Warriors to impress his date. But, to his dismay — even with a basketball game mere feet away — the date was on her phone the entire time.

But, if he had known how frequently she used social media beforehand, he could have avoided that problem.

Often, one partner may be twifing out of habit — unaware of the damage it’s causing to the relationship. Graceful said he once showed someone a video explaining the app’s niche, and the man who watched it had an epiphany.

“He stated, ‘After watching that video, I now know what my girlfriend is complaining about and for that, I owe you,'” he said. “Hearing that made me proud of what we have and what we are trying to achieve for daters — and even married couples.”

Graceful said understanding twifing habits has become the modern-day equivalent of asking if someone smokes or drinks alcohol. It’s crucial for the long-term health of a relationship that both parties are on the same page.

He said he’s also working to add other compatibility factors — in addition to social media usage — to Mix Amore that could help to make a relationship last longer. Additionally, he’s recently added a store so people can purchase T-shirts, blankets, towels, mugs, and more with the platform’s popular heart logo.