Compelling PR strategies are vital to any business, including dating sites. You can have an amazing product that no one else has or offer services that are groundbreaking for this industry — but, if you’re not spreading the word and drawing in customers, you’re missing a big opportunity.

Creating a captivating marketing campaign isn’t as hard as it may seem. Take it from the seven dating sites and apps below. They all launched campaigns that engaged users, attracted new customers, generated leads, increased social media presence and brand awareness, entertained and educated people, and/or made a difference in the world.

In 2016, in honor of International Women’s Day, Happn partnered with Equality Now to create the One in Three campaign. The two companies wanted to bring attention to the fact that 1in 3women suffer from physical or sexual abuse.

On their timelines, Happn members were shown pictures of women with bruises and the tagline “I’m one in three.” As a member scrolled through a woman’s photos, her bruises slowly went away.

“We stumbled across the stats and wanted to do something for International Women’s Day. The profile was inserted in the timeline in a very native way and the interaction was very easy. We had very strong engagement,” said Marie Cosnard, Head of Trends at Happn.

With the #MeToo movement and Time’s Up initiative, and today’s general political climate, harassment and violence against women is at the top of everyone’s minds. Happn was among those jump-starting the conversation a long time ago, and this campaign shows that the team cares about more than just making matches.

2. Match Strives to Save the Sehuencas Water Frog

Match created a profile for Romeo, the Initiative’s poster child — or frog — in which he discussed his plight and shared some fun details about himself — including that he’s never been married, he definitely wants kids, and he loves eating and spending nights at home.

“Romeo may be the world’s loneliest frog now, but his fate stands to change dramatically with the help of Match and generous singles and couples who decide to show their love for Romeo and our wild world this Valentine’s Day,” Robin Moore, an amphibian conservation biologist and Global Wildlife Conservation’s Communications Director, told Oklahoma’s News 4.

Match’s latest campaign showed off the team’s fun, yet philanthropic, side, and customers want to see more of that transparency from the companies they give money to.

Hinge took its marketing offline in 2017 with its Let’s Be Real campaign in New York City. The app (which matches singles with friends of friends on social media) was inspired by how users were responding to sign-up questions like “What can’t you live without?” and “What are your unusual skills?”

According to AdWeek, Creative agency Barton F. Graf wrote ads based on this information and “added site-specific references to the copy that tie each ad to its location.” For example, mentioning a bar nearby. Ads appeared on walls and phone booths in the West Village, SoHo, and Williamsburg, among other neighborhoods.

We think it’s safe to say that most people like pizza, especially free pizza. That’s why, in 2014, Tinder and Domino’s collaborated to give the people what they want. On Valentine’s Day that year, Tinder users were able to swipe right on Domino’s and take part in pun-filled conversations for a chance to win a free pie and other rewards. 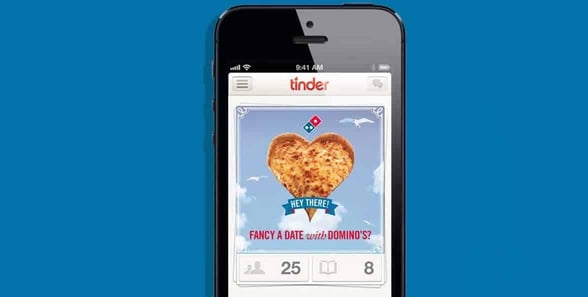 Tinder and Domino’s wanted to help singles meet and enjoy a delicious slice.

The campaign alone had a social media reach of 200,000 and was responsible for more than 700 Tinder matches. It was impactful and super engaging, and it was a pick-me-up for those singles who might’ve been feeling a bit down on Valentine’s Day.

In 2015, Madonna released her 13th studio album, Rebel Heart, and turned to popular gay dating app Grindr to help her advertise and offer some special moments for fans.

Grindr members were asked to recreate the album cover (Madonna with black nylon wrapped around her face) and post it on their profile. The top five winners were able to chat with the Queen of Pop on the app. Not to mention three other winners received free signed copies of the album, and an additional three received their own copies for free.

If you’re stumped at what to do for your next marketing campaign, getting a celebrity involved always helps.

in 2017, Match had one of the most unique campaigns we’ve ever seen from a company — let alone a dating site. The London-based team opened a pop-up store for two days in the Marylebone area to offer a new way for members to connect. 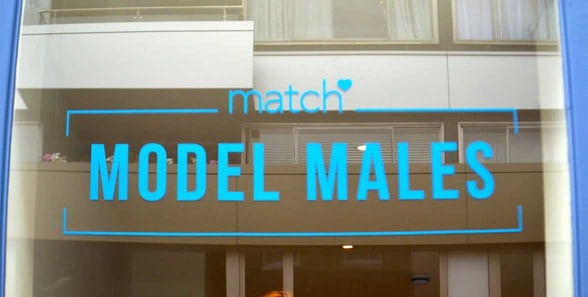 In one campaign, Match printed out 3D models of some of their users.

While sipping on some prosecco, women could look at miniature 3D models of numerous male users and get more information about each guy on the packaging. “Model males,” get it? If they were interested, they could contact the man via a link. Match’s goal was to launch this campaign in other major cities if it went well.

It can be rare for a company, particularly a dating site, to see their customers face to face, and Match really put in the effort in a creative way.

7. Ava From “Ex Machina” Signs Up for Tinder

Tinder strikes again, and this time it’s with Hollywood. In 2015, the team created a fake profile for Ava — the main character from “Ex Machina” starring Alicia Vikander that was premiering at SXSW at the time. Users who swiped right on Ava were able to engage in some banter, and then they were directed to the movie’s Instagram to learn more about the plot, opening day, etc.

We find this campaign to be pretty amusing, particularly for fans of the movie and/or Alicia. You’ve got to be careful with this kind of stuff, though, because you risk annoying users. In this case, if they thought the profile was of a real woman.

Take Your PR to the Next Level

These are just a few of the most impressive marketing campaigns we’ve seen from dating sites, and we know they’re not the last. Remember the best campaigns are genuine, relevant, timely, and either fun, educational, or heartwarming. Let Match, Tinder, and the rest of them inspire you the next time you put your PR gloves on!