The Scoop: ChinaLoveMatch is a dating site that connects mostly Western and Chinese singles, and one of its main goals is to promote authenticity — which is why the team co-founded the International Alliance for Honest Dating Sites. The contingency wants to develop scammer-free online dating experiences for singles who want to form long-term romantic connections. ChinaLoveMatch embodies that mission as the site’s anti-scammer and commitment-minded dating policies mean it only accepts about 40% of user applications.

Many online daters have become accustomed to scammers, but that can be especially true for online daters seeking connections with singles in other countries. Some scammers take the form of women who seem too beautiful to be real. Others pose as men who appear to be perfect in every way.

These malicious users come standard on many dating sites. According to John Abbot, the Founder of ChinaLoveMatch.net, some sites simply ignore scammers. For massive dating sites with hundreds of thousands — or even millions — of users, the job of weeding out those profiles can be too daunting and can’t necessarily be taken care of by virtual assistants or automated processes.

However, even though fake profiles and scammers have become an aspect of the online dating landscape, that doesn’t mean singles aren’t disappointed and frustrated. That’s why John is so committed to creating a scammer-free experience on his dating site.

“The number of scammers and insincere users we’ve encountered is outrageous, which is why we wanted to give people an environment where they didn’t have to worry about that,” he said. 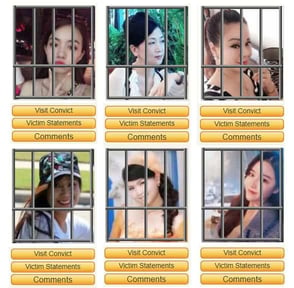 ChinaLoveMatch strives to create a scammer-free experience, and it locks offending profiles in its Scammer Prison.

This resolve eventually became one of ChinaLoveMatch’s vows to be completely scammer-free.

Before the platform approves new users, John and his Chinese partner sift through applicants to determine who is authentic, who is not looking for love, and who may be a scammer. This approach leads the pair to reject more than 60% of user applications because they appear to have malicious intent or are looking for something that the site doesn’t promote.

“My Chinese partner and I determine whether to reject people because we think they’re scammers,” said John.

Occasionally, a scammer will get past the screening process, but because ChinaLoveMatch promotes member reporting, they’ll eventually be caught. Then, they’re locked away for good in the site’s Scammer Prison. There, members can still view their profiles and pictures, and they act as a deterrent to others. Further, if the scammer has been in contact with members of the site, ChinaLoveMatch sends out “Scammer Notifications” to all users who have communicated with that person advising them to cut off all connection.

On a Mission to Pair Commitment-Minded Singles

John understands that sites — including Google and Facebook — may be hesitant because of so many insincere daters and fake profiles. But just because scammers populate these websites doesn’t mean that there aren’t legitimate daters who want a place where they can build authentic relationships with people from other countries.

ChinaLoveMatch differentiates itself from those sites through the rigorous vetting process it has developed. The platform’s focus is much more family-friendly than other cross-cultural sites because most users set up profiles on ChinaLoveMatch intending to find marriages or life partnerships and building families or relationships that provide love and support into their twilight years.

And the site takes its commitment seriously — so much so that it co-founded the International Alliance for Honest Dating Sites in an effort to bring integrity back to the online dating community. The Alliance is determined to raise the profile of those sites that are helping people connect honestly while educating people on how to avoid fraudulent sites.

ChinaLoveMatch also carefully screens users to ensure they have a sincere desire to find a long-term partner through the site.

“We’re a long-term relationship site, and we don’t approve anyone who doesn’t have that mindset when looking for a partnership,” John said.

Over the years, more than 350,000 positive, sincere users have used ChinaLoveMatch, with between 10,000 to 15,000 users active at any one time. For that select group of users, it’s a breath of fresh air to build connections on a platform that so thoroughly emphasizes honesty and respect.

“We’re not interested in asking people to fill out long forms. Our users aren’t interested in that either,” said John. “How can you write a questionnaire for Chinese users who may have different ideas about relationships? We try to match members for their basic lifestyle preferences and common interests but not go into a deep psychological evaluation. Language and cultural barriers render that impossible.”

Many of the features on the platform focus on helping users bridge the cultural divide between China and the West. Westerners think of relationships differently than Easterners do, John said, so the blogs and forum help users learn about some issues they may face while dating.

The platform’s application process ensures that relationship-minded daters can easily find each other.

“Our bloggers write about making that cross-cultural leap, help people understand the pros and cons of dating someone from another culture, and encourage them to get beyond the hurdles to build a good relationship,” he said.

ChinaLoveMatch users can connect with potential partners by chatting with them in the forum or by browsing or searching for singles who meet their criteria. Once they meet other users to whom they’re attracted, users can then video or audio chat with one another or use an instant messaging feature with an instant translation tool to enhance communication even if they don’t speak the same language.

Users continue to discover ChinaLoveMatch because of these features. Even though members leave the site because they settle down with partners, the number of regular users stays fairly even year after year.

“For the last two or three years, things have been consistent. It hasn’t slowed down,” John said.

While ChinaLoveMatch has continued to rely on the tools and anti-scammer measures that have made it a success, the platform’s demographics are changing as the world experiences a cultural shift.

Ten years ago, ChinaLoveMatch membership was made up almost entirely of Chinese women and Western men. These types of pairings were common and popular. ChinaLoveMatch rarely accepted Western women of any ethnicity other than Chinese because men in China didn’t seem interested in them. On the flip side, said John, white and black women were rarely interested in Chinese men.

However, as John said: “Things have been changing, culturally, in the last 10 years.”

Now, the platform sees more Western women of non-Chinese heritage signing up for profiles — at a rate of three to four per week. Further, more Chinese men have become interested in dating non-Chinese women.

Still, despite these demographic shifts, many of the couples who have found love on ChinaLoveMatch are Chinese women who have partnered with Western men. That’s why ChinaLoveMatch has a long list of success stories — written both in English and Mandarin.

If he had to sum up why his site has remained so popular, John said its focus on safe, authentic dating has helped it get this far — and will contribute to its future growth.

“We’re so successful because people genuinely appreciate international dating with no worries,” he said.